A Break For Me!

We provided two weekend breaks to the Angus Hotel Blairgowrie, allowing 20 carers to have a well-earned break away from their caring role. Each carer enjoyed a holistic therapy, dinner, bed and breakfast and lunch on the Saturday while on their weekend break

Our mission is to make a positive difference to the lives of unpaid carers in Helensburgh & Lomond supporting them to achieve the best quality of life, encompassing help and support for their caring role and the opportunity to pursue their own needs, interests or work.

What A Break For Me! did

We provided two weekend breaks to the Angus Hotel Blairgowrie, allowing 20 carers to have a well-earned break away from their caring role. Each carer enjoyed a holistic therapy, dinner, bed and breakfast and lunch on the Saturday while on their weekend break.

While the carers were in Blairgowrie they went for long walks in the country, carried out some leisurely shopping in the tourist areas and enjoyed the scenery, followed by afternoon tea in the hotel. Some of the carers had never met before going on the break and new friendships were formed. These carers have since become very close and meet regularly at the Carers Centre. One gentleman carer had a game of bowls at the local bowling green.

The weekend breaks were advertised in our bi-monthly newsletter, posters, coffee mornings, tea dances, outreach cafes and word of mouth. We recruited a new volunteer who attended the second weekend trip, the volunteer helped the staff member with all aspects of the break ensuring all carers were included in all activities. A PVG was completed before the volunteer attended the weekend.

The volunteer said “it was a fantastic weekend and it was a pleasure to meet all the lovely carers, it was very rewarding knowing I was helping make their break away very enjoyable and l look forward to more volunteer opportunities with Helensburgh and Lomond Carers”.

Ann cares for her husband Jim who was diagnosed with cancer in October 2014 and since diagnoses Jim has undergone 6 months of chemotherapy at which point he developed sepsis. Jim and Ann also care for their daughter who has Bi polar disorder and manic depression. During a coffee morning in the centre it was suggested by the support worker that Jim and Ann would benefit from a break.

During an evaluation Ann commented that she felt the break had made her feel like a cloud had been lifted, as they had not been away since Jim was diagnosed with cancer and it meant they got to spend valuable time together away from the pressures of their caring responsibilities. Whilst in Blairgowrie Jim put it on Facebook that he was at the Angus Hotel and he immediately received a message from a cousin that he hadn’t seen in many years who happened to live 4 miles down the road so they arranged to meet for lunch.

They reminisced about their childhood and shared many stories and when Jim got back home he received an email from another cousin who had immigrated to Australia when he was 6. As a result of attending the weekend break Jim was able to reconnect with relatives he hadn’t seen in many years. Jim and Ann commented that they had a great time with lovely people who had a great understanding of their caring role.

During the break the couple enjoyed the use of the spa facilities, Jim enjoyed his first massage therapy which left him feeling very relaxed. Also the couple went on lots of country walks which improved their physical and mental well being. Ann said “I came home with my batteries fully charged and ready to deal with the pressures of my caring role.”
Helen had been caring for her brother who has mobility problems and needed 24 hour care until he passed away in January this year. Her GP realised she was going to have a break down, and referred her to the carers centre. Helen had been caring for her brother for 4 years round the clock, she didn’t have any time to herself, she felt guilty and became very depressed.

Helen registered with us and quickly felt comfortable coming to the centre when she was having difficult days. During a one to one session with Christine, our Carer Support Worker, Helen was encouraged to participate in an upcoming health & well being course at the local gym which helped her to manage stress levels and feel healthier. During the course she met other carers in a similar situation and Christine encouraged them to come on the weekend break to Blairgowrie.

Helen initially said that she felt a bit overwhelmed, however after some reassurance the thought of getting a break with people who understand what caring is like was a great idea. Helen enjoyed the walks during the weekend break and said the holistic therapy session helped her to relax and relieve stress and anxiety.
Jean cares for her daughter who was diagnosed with Dementia (Picks Disease) in 2014. This carer gets very little support and spends the majority of time in her home with the cared for person as she is very anxious about leaving the house. Her daughter does not like change in anyway and has to have a set routine.

Jean had seen the advert for the short break in our newsletter, however she never thought it would be possible to go as there would be no one to look after her daughter. Jean had not had a break since 2014 and even has to sleep with her daughter as she will not sleep alone. Jean mentioned during a centre visit that she used to enjoy reading a book before falling asleep however she needs to go to bed in the dark now so she does not wake her daughter.

Jean feels very socially isolated and stressed as she can never get a night out which she used to enjoy in the past, so when she was informed by the support worker that respite could be arranged through the centre she was delighted it was made possible for her to have a weekend break without putting her daughter into residential care as this would be very unsettling for the daughter. We arranged full weekend respite hours through our existing Integrated Cares Respite Budget.

Whilst on the weekend Jean enjoyed a holistic therapy and two sociable nights, the first night was a dinner then a live band and the second was dinner and an Elvis Presley tribute night. Jean also made new friends with other carers who are in a similar situation. They have been friends ever since and meet regularly here at the Centre.

Jean said it was just wonderful to have a bed to herself for the first time in 2 years and the break did her the world of good. She feels that she can now come to the centre and there is always a friendly face and someone for her to talk to.

The fund has made respite more accessible to carers and those who would not have otherwise had a break from their caring role. One challenge was to convince carers that they were worthy of the break and that this would give them the opportunity to recharge their batteries, as time and time again, carers believe that others may need the support or break more than themselves.

We personalise the breaks to suit the group dynamics. This is something we look at very carefully when offering the breaks to carers. Carers are also involved in a consultation process when they complete our annual survey or participate in our focus groups, the finding of which determine activities and events to be organised. As a result of the breaks carers who previously did not use the centre on a regular basis are now attending other activities and events that we organise.
Top tips Helensburgh & Lomond Carers SCIO's top tips for an organisation that wants to run a similar project

Keep the process for application simple, always provide support for the carer to complete the application.

Offer respite for the cared for, enabling the carer to attend the break without worry and consult with carers about what kind of break they would like.

Use this opportunity to engage with hard to reach carers. 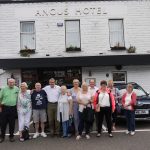