A Wee Treat – Weekend and Day Retreats for Carers

A story by The Borders Carers Centre

We provided “Wee Treat” an opportunity for carers caring for someone with a mental health condition to have a weekend break away with other carers in a similar situation. We also provided opportunities for older carers and their cared for living with dementia, to have days out together.

What A Wee Treat – Weekend and Day Retreats for Carers did

We planned to deliver two residential weekend retreats for carers which were due to take place in April and September 2021. However, due to lockdowns and COVID restrictions, we were forced to change our plans. We were grateful to Creative Breaks for an extension, and on 8th February, we took a group of carers to Peebles Hydro for 2 day/one night of rest, relaxation and sharing. There were 6 carers booked, and all took Lateral Flow tests before attending. Unfortunately, one person tested positive for COVID, so 6 carers and 2 staff attended to offer support 24 hours a day. The carers were all caring for people with very high care needs, so it was incredibly important for them to meet in this safe and supported environment.

We arranged for a massage therapist to give them all an hour's massage & there was plenty of time to chat and share. Lunch and dinner was provided, as well as teas, coffees and treats, and the pool, sauna and jacuzzi was available for use too. All carers had their own double room, and we also had a crafting session, which was a great bonding experience. Not all of us were 'natural crafters' and it was the source of much giggling and fun. One carer was incredibly talented and it was lovely to see her confidence grow with the admiration of her peers.

In addition to the retreat at the Hydro, we also arranged 'wee treat' lunches for carers in several Scottish Borders towns to enable carers to get together and share. Many of them had little opportunity to get out at all over the two year period, so it was a very welcome treat indeed. We held 4 lunches with 19 carers in total in Eyemouth, Kelso, Galashiels and Hawick.

We spoke to carers caring for people with Dementia to ask if there was still appetite for days out taking the cared-for with them, but discovered that there was still a reticence around this. Many carers were still shielding, and many of the cared-for are fearful of being out in public. The lunches were a great way for carers to meet up and share their own personal stories with each other whilst enjoying a day out - something many of them had not done for almost two years.

What The Borders Carers Centre has learned

We have learned the importance of being able to adapt and develop to suit an ever changing situation. It was important, for example, that we went back to carers to check in how they felt about the original offer of a day out with their cared-for, rather than pressing on with the original plan for it to fail. We listened to what the carers wanted in place of this, and they all said they just wanted a 'nice lunch with other people'.

We have discovered that Facebook is an excellent resource to reach out and engage with local carers.

We also used the lunches to engage with carers to find out how they felt about starting face-to-face support groups again. We gathered a lot of information using questionnaires, then consulted with a wider group of carers using Facebook, e-bulletin and 'phone calls to project plan a new approach for support groups going forward.

How The Borders Carers Centre has benefitted from the funding

Creative Breaks funding gave us the platform to re-imagine carers support groups. Carers had missed being able to get together face-to-face. We quickly put in place a weekly online group, which was well attended whilst under lockdown. It gave carers the opportunity to stay connected and also the chance to hear what was happening in other Borders towns, but as restrictions started to lift, it was clear that carers were missing human contact. The 'wee treat' get-togethers was the perfect opportunity to speak to and get feedback from carers about how they would like to move forward. In addition to this, we shared photographs of the events on social media and our website which attracted more carers to us, keen to sign up for support.

Carers will have improved relationships, feels less stressed and fatigued and feel more positive about the future with the establishment of new connections and on-going support for as long as required

This was fully achieved, and we know this because we asked for feedback from the carers, some of which is copied below; "What a treat to be spoiled and a delight to have been able to spend quality time with such lovely ladies and with so much in common." "I want to thank both of you for the wonderful break at Peebles Hydro this week. It truly was amazing and so very relaxing. I had a fantastic time and it was just so lovely to meet everyone. It was a truly memorable day/night and it was so good to have a laugh, even if it was at ourselves. Sometimes life just seems to have got so heavy!" "Treated to things I probably wouldn’t have experienced myself and all helpful to my state of mind and physical self." "I can't thank you enough for the opportunity to go to Peebles Hydro with yourselves and the other carers. It was good to hear from other people who were going through similar things and realise that I'm not so alone. The afternoon tea was the perfect end"

A carer who cares for her husband with dementia and challenging behaviour has been very isolated. Lockdown has given her 'excuses' to not leave the home, and, by her own admission, this was becoming habitual. It felt safe to stay home, but she was losing her confidence. When the offer of 'a wee treat' lunch was made, her carers liaison worker encouraged her to attend using gentle persuasion over a period of time. She did pluck up the courage to come, and said that it 'literally changed my life'. Something as seemingly small as lunch with other ladies who really understood her situation has made her realise how important it is to share with others and to hear and be heard. She is now keen to attend carers support groups for ongoing support - something she would not have considered before attending the lunch. 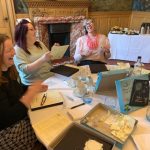