We provided monthly social group for young people with support needs living in the Falkirk area, and twice a year we provide weekend activity camps full of fun and adventure. This provided regular respite support for families

We tried to provide a variety of activities to suit all needs and abilities whilst trying out new things too.

Our project is run by a part time coordinator who uses this time (7.8 hrs per week) to consult with the young people and their families, liaising with them regarding attending the group and coordinating the chosen activities each month as well as the two adventure camp weekends away in October and February. We have regular Sessional staff that provide the support for the monthly groups and during weekends away. We have had some group members who have previously attended the group and some new members recruited through Carrongrange School and others who have been referred through Social Work Services.

We have provided 12 monthly sessions and two weekend camps. We have focused on “Looking Outward”, both beyond the physical base at Bonnybridge Centre to make use of the wider activities happening in the community and looking for new experiences and events that some of the young people had never experienced before. For example we were gifted tickets for a roller derby by Auld Reekie Roller Girls in Edinburgh. The group travelled by train and bus to the game, this was the first time that most group members had seen this fast playing sport, enjoying the experience, noise and excitement of the team winning.

We provided a variety of physical activities such as laughter yoga and a games day where the young people used there five senses taste ,feel, smell, sight and sound to navigate range of games; this was a much enjoyed fun filled experience involving collaboration and team work. Other activities and outing were, visits to places of historical interest such as Linlithgow Palace and Callander House, bowling, cinema, a flower painting demo and tuition on painting flowers, cake decorating and tuition on this. Tie-dying their own T-Shirts, trip to the Panto, a visit to the Highland Show, animal encounter session.

When the young people arrived at camp, the coordinator and staff allocate the rooms, people are grouped together in terms of age, sex and their support needs in the different shared rooms available. They are each allocated a bed in their rooms, but also need to make up the beds for themselves. For a number of the young people either due to their disability or because they had never been asked/thought by their parents to be involved in making a bed, this is a completely new task.

With information from support needs from parents and carers, the staff assess who needs help and who doesn’t and there is lots of fun and laughter in the process of putting on sheets, pillow cases and duvet covers. Skill building around everyday tasks such as their self care, dressing, preparation for mealtime, taking responsibility for washing cups, cutlery etc and tidying up, filling and emptying the dishwasher, taking bins and recycling out is all part of the weekend away experience.

For one young person his parent commented when hearing about how well he had participated and done things to help out with the shared tasks that they would certainly be involving them more in a few chores around the house, starting with keeping his bedroom clean and changing his bed.
We were told prior to going to camp that one young person had an eating disorder and some issues around food, he is a young person on the autistic spectrum with a lot issues and beliefs around food, for example would only eat certain things and had a fear of eating with other people. The coordinator worked with the family prior to camp to gather information about his food preferences and particular anxieties. Mum was very concerned about the weekend away because on a previous family holiday to America, he had refused to eat for much of the time due to being somewhere different and not having the “right” food that he was used to. This was very specific down to the brand, where things were bought from and how it was presented to him at meal times.

The coordinator took on board his preferences, made specific food purchases for this young person and kept thing separate in order that the food he liked was available at meal times. The staff at camp reassured him they had food available he liked and he even managed to spend most meal times with the group for the majority of the time, this was a big step for him which he adapted to without any issue, he was also able to have other “private” time away from others to eat things like his favourite snacks and treats.

In addition because he had spent more time with the others at meal times, he did venture for something “different” one morning for breakfast and had a cooked roll on sausage rather than his usual branded cereal. His mum was pleased that the weekend had went so well and was surprised that he had chosen to try a couple of new things that he previously had not eaten at home, she found this really reassuring that her autistic son could adapt and accept some degree of change without it being a major problem.
One activity that the group tried at the activity camp was tree climbing. This was an instructor led activity, but very much involved all the young people working together as a group in support of each other. Some had the fear of trying something new, the prospect of being reliant on others to hold them in the harness as they climbed the tree. To begin with all were allowed to put on the harness, sit in it and be lifted off the ground. They all managed to achieve this stage even the one person who had a fear of heights did this.

They each took turns of working as a team alongside the instructors to hold the weight of the person in the harness and help lever them up the different stages. Each person set their own goal for where they wanted to climb to. There was a great buzz of encouragement and praise for each person as they tried it and a great sense of achievement for the individuals too. The more daring people went further up the tree and one young person managed to go all the way to the top and here is his quote: "At the camp we went tree climbing, I was very excited as I love climbing. Everyone else was a bit scared, so I was really happy to volunteer to go first. I wanted to “go for it”.

I climbed all the way (with all the climbing harness gear on) to the top of the tree and rang the bell. The height of the tree didn’t bother me at all. I thought I would want to shut my eyes on the way down, but everyone started cheering because I had rang the bell, and this made me feel really proud! I was really chuffed with myself and had a big grin on my face when I got down".

The funding allowed us to have some continuity with the young people and their families as they transition in the final years at school and into college. It allowed them to have experiences in their lives that may not have been offered to them from elsewhere either within their school, social services or families. It allowed the staff (a core group who have stayed with the project over the years) to build and maintain relationships with the young people as they mature, particularly when the young people attend camp, there are opportunities for so much more independence and self determination, choice and development.

We listened and involved the young people in the choices of things they want to do, we do this in a person centred way for each individual depending on their support needs. We encouraged newer participants and their families to join the group by engaging with younger groups of pupils at Carrongrange school, we also have taken personal referrals and referral from social work.
Top tips The Action Group's top tips for an organisation that wants to run a similar project

Consult with service users to get initial ideas of the activities that they might enjoy, keep and eye to events happening locally that allow the young people to enjoy their social lives and activities in the wider community.

Young people surprise you all the time at the activity camps.

With the right support and encouragement both from the trained instructors and their peers, many of the young people faced big fears around climbing at height, getting wet, wearing specialist equipment to do things they had never tried before and felt a great sense of pride and achievement when they managed to climb a tree or walk under a waterfall.

Parents and carers are a great font of knowledge about their young son or daughter, and this in turn allows us to get to know their likes dislikes and specialist support needs a lot quicker. What is really great is when we can tell the parents and carers something new about their son or daughter, about what they have achieved or something new they have tried or experienced.

This is particularly poignant when parents initial say “Oh they won’t do that”/Can’t do that” and within the safe setting of the group or the activity camp, they surprise themselves and us by doing just the opposite. That is so rewarding and increases their self esteem. Sometimes it is the smallest of things, but is something that makes a huge difference to how the young person is perceived or how they feel. 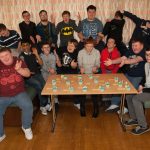