A story by RNIB

We provided a 1 week activity break for 11-14 year olds and two residential weekends for 15-18 year olds who are blind or partially sighted help promote their independence and allow respite for carers.

We also provided a family residential weekend in Dumfries & Galloway offering peers support and a break for the normal routine.

'Stepping Out' Summer Camp (11-14 years) from 1 - 5 August 2016. 12 blind and partially sighted children and young people aged 11-14 years attended a 4 night/5 day residential Camp at Auchengillan Outdoor Centre, Blanefield, Glasgow. The camp was supported by RNIB volunteers with the young people experiencing a range of exciting outdoor activities including raft building, kayaking, Zorbing and a survival challenge. In addition, young people attended a variety of workshops including confidence building, cooking skills and using assistive technology. The camp provided the opportunity for the young people to develop friendships, build a social network and improve their self-confidence to support them in the future.

'Promoting Independence' Residential Weekend 11-13 October 2016 and 3-5 March 2017. 14 young people aged 15 -18 years attended a residential weekend based at the Royal Blind School in Edinburgh. This 2 night/2 day experience gave the young people the opportunity to improve their confidence and develop their self- esteem through meeting new people and taking part in a variety of workshops on developing independence to support the transition to adult life. The workshops included mindfulness, cooking, independent travel and employability, delivered by specialist staff from RNIB and the Royal Blind School.

In addition the young people helped set the table, prepare meals and washed dishes. They developed their social interaction and built friendships and supported each other. They took part in tenpin bowling, general knowledge quizzes and shared ideas and experiences on a wide range of topics.

Family Residential Weekend 25 & 26 March 2017. 12 Families attended this event based at the Holiday Inn, Dumfries. This gave families the opportunity to come together in a relaxed and informal setting and try new activities including Boccia and Mindfulness. Carers were able to have a break from their normal routine and benefit from peer support as well as take part in fun activities with their children.

John, a 17 year old young man with severe visual impairment and attends mainstream secondary school and is hoping to go on to college. Attending the ‘Promoting Independence’ residential transition event was his first experience at being away from home. His parents reported that ‘he was very anxious but actually enjoyed it’. During the weekend John had the opportunity to try activities he had not done before including cooking, mindfulness and tenpin bowling. He took part enthusiastically in all activities and enjoyed the social aspect of the weekend.

The weekend gave him the chance to be independent including travelling independently and having to do domestic chores. He spoke about not doing much at home and spending a lot of time on his own. After the weekend his parents reported that ’he enjoyed the cooking and felt like he could do things’. They explained he was usually quite negative at home with ‘the mindset of I can’t do that’.

John fed back ‘this has benefited me because I now do more around the house, I do more washing up at the moment’.
Clare, a mother of a teenage girl with visual impairment and mental health difficulties and her daughter attends the local mainstream secondary school is doing well academically, although ‘not included with peers at school’.

Clare reported that the residential weekend gave her other daughter a break from her sister and that they were able to have a meal out together ‘with no tantrums’. They both benefited from this time together away from their caring responsibilities.
Ailsa, a single mother of two boys, one with visual impairment and other health issues. Ailsa felt that attending the family residential weekend benefited her as it was ‘a break from routine and not have to cook or do dishes, it was good to talk to other parents and there’s other out there who struggle at times’. She felt ‘it was great to see her son flourish and be happy and content’.

Attending the weekend made her son “feel ‘normal’ as in he is now aware that there is other children who have sight problems and also that there is help out there for him so that’s a big positive”. Ailsa’s son commented to her ‘that he knows there’s reasons to live now’.

What RNIB has learned

An unexpected challenge was the change of manager and a period of approximately 5 months with no one in post. This funding has allowed RNIB, who work with children and young people throughout Scotland, to organise and run a variety of events to bring together children, young people and their families. This helps towards combating the feeling of social isolation often reported by children and young people with sight loss.

By speaking to children, young people and their families at events the organisation has been able to gather information about what is important to them and plan this into future provision. A particular benefit for the project was the development of the partnership with the Royal Blind School and that the partnership working is to be continued into the next project.

Through working closely with statutory and other voluntary organisation's such as education and local societies, we have been able to involve families of children and young people with visual impairment who would otherwise feel unable to attend. Through developing these partnerships with statutory and other voluntary organisations will highlight the awareness of the benefits of such activities.
Top tips RNIB's top tips for an organisation that wants to run a similar project

Involve Statutory and local societies in the planning and delivery of events. This will increase the reach in an area and develop closer links within communities.

Have a waiting list for events to fill places not taken up for a variety of reasons, such as illness, other engagements, work commitments etc.

Allow time for informal engagement for parents/carers with staff and peers and time for children and young people to engage with each other when planning events. 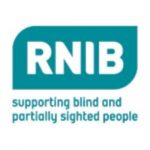