We provided 1:1 and group befriending for adults with learning disabilities living in the Scottish Borders.

This provided friendships, improved their wellbeing, confidence & social skills and provide respite for their family carers. The service was delivered entirely by volunteers.

What Adult Short Breaks Project did

Volunteer recruitment was principally by word-of-mouth, our website and Indeed. We won Volunteer Centre Borders’ inaugural Loving our Volunteers award, which raised our profile. We reached potential members and families through Social Work, Local Area Co-ordinators & care providers and directly through local publicity and our website. We registered all those with learning disabilities.

We provided 30 1:1 befriending links and 38 group links to 63 adults with learning disabilities aged 20+ (5 had both). 9 people were new to the Project. 10 befriending groups met fortnightly for 3 hours with a month’s break in July. They did a wide range of activities that included drama, film, art, music, healthy eating, pottery, cooking, flower arranging and overnight trips to Kielder, Edinburgh and Falkirk.

A new group formed in Peebles in May is running well, it specifically targeted adult male members who had not previously been linked. Most of the 1:1 links met fortnightly and did community activities of all types, for example walks along the Tweed, a trip to Melrose Abbey, evening classes at Borders College, gym sessions, a picnic in Jedburgh, visits to Chain Bridge Honey Farm and Eyemouth harbour, coffees, lunches, rummaging in charity shops. One link went on an overnight trip accompanied by a staff member.

We held our 10th Friendship day in November 2016, with 60 1:1 links from across the Borders coming together for arts workshops and fun. An independent evaluation can be found on our website. 102 family carers benefited (14 were new to the Project). They did a wide variety of things with the time available, for example met other parents, went places as a couple, did shopping, spend time with members’ siblings or socialise at the same time as the groups met.

Ruth is 27 and lives with her mum (Cherie) in a small village. Cherie self-referred Ruth to Interest Link and we all met for a coffee. Ruth decided that she would like to join the baking group and started the following week. Ruth’s epilepsy means that her mum comes along with her but sits in a separate room and has a coffee and a chat with other parents. Ruth is a really popular group member and is always smiling as the team make their goodies together.

Although Ruth was nervous on her first night, it actually turned out that there were several people attending who she already knew and the evening turned into a mini reunion for the group members and some parents/carers. Therefore Ruth settled in quickly and instantly became part of the baking crew. Ruth says “she loves it and Debbie is a sweetie and the staff are really kind”

Cherie says “I was very surprised at the number of people attending. Everyone has been so welcoming and it’s good to see Ruth so animated, making new friends and enjoying herself. I can only say thank you to all the staff concerned. I have also made new friends, some of whom I am now starting to meet up with at other times. The evening refreshes me and improves family life because we have new things to talk about.”

Debbie – the class tutor- says “We certainly miss Ruth’s big smile on evenings when she cannot join us!”
Macaulay has learning disabilities and is in his early 20s. He lives with his mother, who was worried that he had not had an older male role model in his life. He had also become very lonely, staying in the house most of the time and taking no exercise. When he did go out and try to make friends he had got into social situations where he was taken advantage of and bullied.

An opportunity arose for a link with an older male volunteer Rory who came armoured with a wealth of life experience and could act as a mentor, guiding and supporting Macaulay and keeping him on the right track.

They clicked very quickly and clearly enjoyed each other’s company. Initially they met for coffee and lunch together but after a while Rory suggested some outdoor activities and that they travel independently to where they would meet up. Macaulay took some persuading, but after a while took the bus on his own to a meeting and then they walked up to a local castle ruin. It was such a success their next trip was to climb the highest hill in the Borders, Ruberslaw, with a well-earned picnic and stunning view as a reward.

Macaulay has gained in physical and mental wellbeing, and now realises that when you put your mind to something you can achieve your goals. What is needed is self-motivation, confidence and a friend to join you on your journey. The link will continue for the foreseeable future and Macaulay is now trying his hand at some volunteering.

Macaulay’s mother is delighted that he is going out safely, and the reassurance was an enormous boost to her own wellbeing.
Helen is 43, is visually impaired and has Learning Disabilities, she has gone through some traumatic experiences and recently moved from living with her mother to residential care. To make the transition easier for both Helen and her mother we linked her up with her volunteer Lauren.

A firm friendship was soon forged, valued by Lauren as much as by Helen and revolving around a Wish List of ideas kicked off by a “Posh Afternoon Tea” at Balcary House Hotel. They said afterwards that this had definitely given them the “Feel Good Factor”, exactly what they both needed. Because of Helen’s visual impairment her wish list choices were listening to music with Lynne over coffee and going to musicals and concerts, which they are now doing.

Helen says her friendship helped settle her down after the difficulty of recent experiences and the transition to her new home. Both Lauren and Helen’s mother have commented on how much more confident and happier Helen has become, and Lauren has noticed Helen is happier to speak to people they meet when they are out and about.

Helen’s mother was worried about Helen’s move away from home and said she feels much better knowing Lauren was providing some support. Not having the caring role has enabled her to make new friends after a long period solely focusing on Lauren.

Simply knowing that the person they care for is enjoying themselves with friends and is safe contributes greatly to carer wellbeing. People with learning disabilities make very good friends and volunteers almost always report enormous benefits from their friendships.

We have received several grants from the fund and it has enabled us to offer our service on a relatively large scale for a considerable period of time. With fewer and fewer befriending projects for people with learning disabilities in Scotland, this support is greatly appreciated.
Top tips Interest Link Borders's top tips for an organisation that wants to run a similar project

Feedback from members with learning disabilities can be difficult to gather because of communication difficulties. However, carers and volunteers are in an excellent position to tell you about how member benefits and outcomes.

Befriending groups enable a lot of personal development through, for example, drama and outdoor projects, as well as the experience of being in a social group.

Finding adult volunteers has become increasingly difficult, so make the most of any opportunities. 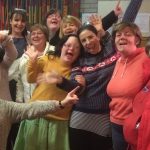