A story by Bellshill and Mossend YMCA

We delivered our Animar project for young people aged 12 to 18 years old with Additional Support Needs, which runs three Saturdays a month.

Animar promotes independence through personal development sessions and community engagement. It runs in Bellshill and Mossend YMCA and in local communities and cities.

Animar delivered 36 Saturday sessions (10am to 2.30pm) and a five day outwards bound trip to Wiston Lodge in the last financial year. These sessions took place both in the base (YMCA in Bellshill) and on trips planned and organised by the young people themselves. Throughout the year 16 young people with additional support needs have benefited from Animar.

The young people are referred into the service by either social work, other organisations including Includem, Play Peace and Jack and Jill, School or self referrals. The carers of the young people have seen a benefit from their young person attending Animar in many ways. Some parents have enjoyed weekend activities like, shopping and lunching, things many take for granted but would have been difficult to achieve without the support of Animar.

Some parents have broken down their isolation by meeting other carers through the project. Staff have aided families by helping with the commute to Animar for carers who would struggle to get their child to Animar on their own. Animar has benefited young carers by giving them time to themselves for a few hours on a Saturday to allow them to spend quality time with their parents or friends.

Animar continually provides training opportunities for staff including child protection food hygiene, handling and lifting, intimate care, first aid and Makaton. A particular success at Animar is the creating of the peer mentor role. A young person with additional support needs mentoring younger members, helping pass on skills and support others is working well and allowing Animar to grow and develop.

What Bellshill and Mossend YMCA has learned

Animar has learned to find more sources of funding, staff have learned the benefits of effective time management. staff have also learned that open communication with both carers and young people leads to better overall outcomes for the family unit. Animar has learned it needs better evidence of the great work they are achieving.

How Bellshill and Mossend YMCA has benefitted from the funding

The young people at Animar will have developed positive relationships with their peers and in doing so raise their confidence in accessing activities within their community as a member of Animar.

Animar was successful this year, in this outcome. The young people have been supported to plan and create their own service which included accessing an outward bound trip from Monday to Friday during the summer in Wiston Lodge. Independent travel via bus, train and one ferry trip to Dunoon, cinema trips, trips to musuem's which were local and in Glasgow and Edinburgh, bowling trips, Lunches at restaurants. The young people worked together to budget and plan their access to new and fun activities.

Dylan is 17 years old and has Autism and is one of five children. Dylan's parents worried that Dylan wasn't 'street wise' enough to engage in his local community. Dylan's PSD program within Animar was catered to allowing Dylan to build up his skill sets to be able to access his community safely. Staff used the play back resources to organise sessions on independent travel and keeping yourself safe. Staff trained in forum theatre, ran Scenarios for Dylan to problem solve when things may not go to plan. Things like missing the bus, or getting on the wrong train and people being rude was explored in the safety of the base environment. Open communication with Dylan's parents allowed them to follow his progress. Dylan loves movies, acting and singing. Through his ability to now independently travel, he access a drama and a movie club. Dylan also travels independently to Animar, freeing up more of his parent's time with Dylan's four siblings.

Both young people and their carers will have access to more leisure activities.

Jason is 16 years old and has learning difficulties. He lives at home with his Mum and two brothers who also have learning difficulties and his youngest sibling also has a physical disability. Before Animar, Jason was quite isolated from his community. Jason was popular at school, but found holiday times hard not seeing his friends and helping care for his youngest sibling. Jason was referred to Animar from a friend of his from school who already attended. Jason enjoyed the social interaction and identified to his Animar key worker that he would like to attend more clubs like Animar. Through communication with mum and other services in the area, Jason now attends Play Peace. Play Peace is a youth group that runs to help children and young adults with additional support needs cope with the breaks in term time at school. Jason now attends Play Peace one Sunday a month term time and every Monday, Thursday and Sunday during school holidays. This has broken down Jason's Isolation. Jason has worked on his independent travel and his food hygiene, and now Jason is on his new venture of aiming to work in the food industry.

Carers will have reduced stress and be happier within their role and engage in other services.

Based on the Solihull Approach, parents and carers are always welcomed and given time to talk. Animar runs an open door policy provided support for the whole family unit and signposting where need be. Animar has successfully built up positive relationships with carers ensuring each one is given time and attention from staff. Animar has welcomed carers feedback on what is needed to ensure they feel supported. Animar staff ensure they are aware of local services and attend VANL (Volunteer Action North Lanarkshire) meetings to keep up to date with local services within the third sector to help sign post parents who are looking for these services.

Linda is Mother to David (16) and George (13) who both have additional support needs and both attend Animar. Linda had expressed she can find things difficult at times. Linda was invited to sit with the Animar's manager after dropping her sons off, and have a cup of coffee. During these chats Linda expressed feeling anxiety and worries she has. Linda was referred to a local group for relaxation and advise. Linda started to acknowledge the confidence she was seeing in her sons as they attended Animar had gave her confidence for the future. Linda set her self goals and is now attending college studying social care. Linda doesn't always stay for her coffee now as she is busy enjoying her groups and college work.

Some of the young people do access main stream services, however, there are mainstream services that are unfortunately not ready to accept Young People with additional support needs. A local animal service weren't able to support one of the young people volunteering for them as they felt they could not deliver the training that was required. As a result of this, the Animar staff are looking to extend the Animar service to include support in working environments to try and aid services training young people with additional support needs.

Sean is 15 years old. Sean has Autism and OCD. Sean lives with a foster family. When Sean started Animar he was new to the area and unsure of what his goals should be when planning sessions. After some work with his key worker he disclosed he had always wanted to join the cadets, and when researching local groups, Sean discovered that Bellshill had both a cadets and a local scouts group. Sean and his Carer, took this information and enrolled Sean in both groups. In the last 6 months through Sean's new groups, he has been involved in remembrance parades, camps and competitions. 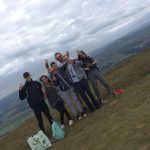