A story by Artlink Edinburgh and Lothians

Au-some Animators is a small group of young autistic people age 13-18 in Midlothian who meet every Friday night in a local library. The club offers a regular social life for young people who enjoy animation.

The young people involved attend an additional educational support needs base in mainstream high schools. The club is kept deliberately small (5 people) because the young people have told us its hard to join groups that have too many people. This year we involved 3 new young people (Artlink and Barnardos, who support the group often hear about young people who would like to join, but sometimes others hear about it through school or social work.)

The club works well because the young people have a shared interest in drawing, animation and gaming. It helps that there’s good support from library staff, Barnardos support staff and an animation tutor from Artlink. Whilst they are at club, their parents usually spend the time going shopping, walking the dog or going out for a coffee with a friend.

The project had some unexpected outcomes for the young people like having the confidence to practice travelling their by bus on their own and creating new ideas for their school work. One person even made a portfolio to apply to Edinburgh College. Another young person is now using industry standard animation software and showing his digital drawings online (@CreativeMidlothian on Instagram).

The project has had to adapt to Covid-19 lockdown. We did this by staging our club online using House Party because it has a really good drawing game. We meet every week at the same time so people aren’t losing out on their weekly club.

What Artlink Edinburgh and Lothians has learned

We have learned that, targeting families most in need of this support is helpful when we work in collaboration with schools and social work, as they can help us reach the families with the least opportunities. Partnership working with libraries was helpful as they got to know the young people well, and this helped library staff understand their needs. This resulted in increased library usage by the young people and a better autism understanding for their staff.

Dealing with unexpected changes (Covid-19) was less problematic than thought, as our social relationships translated well to using online video sessions instead. If you have the relationships, its much easier to keep them going as we can use technology to sustain friendships. We learned that social and skills support was helpful to the young people who used it to apply to further education colleges.

How Artlink Edinburgh and Lothians has benefitted from the funding

We have. strengthened our organisation's reputation with the library service, social work service and education, as our support complements young people's developmental progress. We enjoy a very lovely relationship between Barnardos, the library service and the young people involved. We understand much more about how young autistic people like to socialise - and how important friendships are. We understand how to use simple, accessible technology to allow young autistic people to learn about animation and how to socialise out with of club.

We ran 50 weeks of club for 5 young people aged 13-18. This funding allowed a professional animator to deliver fortnightly input. In the original application we said we'd work with 2 different animators but the young people were keen to stick with the same person. Au-some animators takes place in a community hub where a school, leisure centre and library are in the same building. This is useful as most of the young people live within a short bus, walk or car journey. Although the young people don't all go to the same school, they have common ground through their love for animation, gaming, model making and drawing. The group have learned to use free apps on their smartphones to create stop frame animations. The project is supported by Barnardo's who have years of experience of running youth social clubs and help people forge social relationships through game playing and social support. Having the animator every second week allows young people to develop friendships and skills.

One of our new members had never joined a youth club before because they needed small groups to feel supported enough to sustain their involvement. They tried other groups in the past but they didn't last. The transition social worker from social work had suggested he try the club because of his interests in animation and the cult cartoon 'Five Night at Freddy's'. This popular animation was commonly appreciated by others in club, so it was easy to find something to share with others. He started using a smart phone app in sessions to make a Lego brick move, then tried Plasticine model making using stop frame. He then tried making his own Five Night at Freddy's drawings come to life using stop frame and eventually tried digital animation using a graphics tablet. We helped the family apply for independent living fund transition funding to buy animation equipment as he was so keen on using this way of working, and wanted to apply to college to study it in the long term. He now uses industry standard animation software and works at home creating a range of digital drawings and moving images. Mum said 'it's completely changed his life, I can't believe how much more confident he is, and how much he's gained socially'

10 carers had regular weekly respite (2 hours per week) to enjoy time to themselves. Parents used this time for a range of purposes, for example, spending time with other siblings, going for a relaxing food shopping trip instead of a time limited one, meeting up with pals for coffee and going for a swim in the leisure centre.

Tracey is a mum whose son attends club every week. Her son can't self travel, so she drops him to the club and then heads off to do whatever she wants on that day. As a parent with little respite, Tracey uses the time to give herself a 'breather'. "I wouldn't say I use the time for anything amazing, but having the chance to browse around Tesco and have a coffee whilst I'm there is such a luxury. I can really think about what to cook for tea, and take my time. Sometimes I've caught up with a friend but usually its for really basic things - but the difference is that when I pick up my son, we are both in a good mood, and we go back to the house to relax into a weekend in a good head-space." "The club has really given my son a boost - it's a huge part of his week and mine - before he joined Au-some animators, I had no respite at all - now I feel like its one of the highlights of both our weeks. I'm even considering getting back into photography as I could sometimes use the time to go take photos or use the library for inspiration for new project work"

10 parents will feel better supported to sustain their caring role

Each carer was offered the opportunity for 2 hours of respite every week. The only time when this didn't occur was due to illness of the young person. Club attendance is extremely high (98%) so carers could rely on the respite. This is because the model of support suits the young people and they were eager to attend each week.

"I'm a parent who has other children and they are much younger than my son who attends Au-some animators. Because club is 5-7 pm on Fridays, I get the chance to put my younger kids to bed, and that's so helpful as bedtime used to be a really stressful time. He comes back absolutely beaming from club, and because he's managed to self travel, I don't have to help him get there or back. This has been a game changer for us, I honestly thought such a simple idea would result in this effect for us all. I am less stressed overall, and he's loving it. I've noticed his needs changing, maybe that's because he's older but I think this is really contributing to that"

5 young people say they feel better for attending club and it's improved confidence, skills and social life. We gathered feedback from carers through questionnaires and a group discussion/ presentation of work with the young people. They all shared a sense that the 'belonging' aspect of the club is the foundation for its success for participants and carers.

One young person had never attended a youth club because it was too stressful to join groups where the focus was on being able to socialise. Most clubs were too busy, noisy and unpredictable for them to be themselves. Au-some animators uses social stories and a predictable structure to allow people to feel safe to socialise. This helps them to show others their personality and relax into developing genuine friendships. "I think club is so important, I like it so much that I get frustrated when we say goodbye on Friday night and I know I have to wait a whole week before I can see my friends again" Nathan "Nathan is part of the family here at Newbattle Library. We look forward to seeing him each week, and he says hello to everyone on his way in. He's an incredibly polite and helpful person and is really good at helping others learn animation" Nathan recently ran a skills session for the care commission who visited the local authority to experience the range of supports available to children and young people. He taught two care inspectors how to make Plasticine move using simple model making and stop frame animation. Nathan now travels on the bus by himself to club, and is excited about leaving school and going to college.

The library have noted that three our of five of the club have used their facilities more. As the young people know the library well, and feel comfortable talking to staff, they will often visit during the week using the computers there, and the graphic novels section. Two out of five of the group have used their animations in portfolios to apply to further education college. 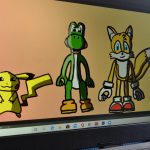