Autism Friendly Football allowed young people on the autistic spectrum to come together once a week to make friends, build confidence and have fun.

What Autism Friendly Football did

All the young people who took part in the sessions are on the autistic spectrum with many of them having multiple support needs including learning/physical disabilities, sensory impairment and or mental health conditions.

Our coaches who deliver the sessions have all been through autism awareness training delivered by Scottish Autism. We also have measures in place to ensure the sessions provided a relaxed environment that allow the young people to thrive.

These include: Pictures of the venue and staff being sent out before the young person attends for the first time, a start questionnaire where parents are asked to provide triggers that upset their young person and any calming techniques they use. A break room for anyone who becomes overwhelmed. Regular feedback between parents and coaches to ensure the young people's needs are being met.

The project does not work directly with the parents/carers however it is designed in order to give them as many options as possible on how they want to spend their break. The venue is just 5 minutes away from a large retail area and has fitness classes and a quiet cafe area on site. The most popular option for parents is normally watching the sessions and socialising with others.

Feedback from both the parents and young people had feeling more supported and making new friends as one of the main outcomes of the project. Discussing issues and experiences with people in similar circumstances can be a real help.

We had originally planned to deliver 40 sessions but due to the Covid 19 pandemic this had to be adapted. The weeks we were unable to deliver face to face we provided all the young people with our Rangers Charity Challenge videos and every second week we sent them our activity worksheets as something extra they could do at home.

Although it's not the same level of delivery as we hoped to provide we received some great messages from parents/carers to say thanks and that these activities had provided an outlet during a challenging time.

The demand for activities for young people with autism is extremely high. Due to COVID we had to reduce the group sizes in order to stay in line with the current guidance. This led to us at one point having a waiting list of over 20 people.

We are always looking at ways we can improve and adapt our delivery to best meet the needs of our young people. Having open dialogue with both the young people and parents and carers is extremely beneficial for understanding the needs different young people have and identifying areas of the project that can be improved.

There are some really good organisations out there in Scotland that work with young people with autism. In particular we have been extremely well supported by Scottish Autism and Team Utd who have helped with our staff training and coach education.

The Covid pandemic was extremely challenging for both the young people and their parents/carers. We ensured that we stayed in contact during the lockdowns and implemented a number of activities that could be utilized as fun games, education tools or just an outlet to distract form being stuck in the house. Some of the families found the activities more useful than others, but even when the the young people struggled to engage with some of them parents and carers were extremely grateful for the additional support.

The Funding provided by Better Breaks and the support of their team has been incredible, especially during this difficult Covid period. The flexibility and quick response time has allowed us to deliver as many of the sessions as possible and make them Covid Safe. The Rangers Charity Foundation is hugely grateful for the support from Better Breaks as it has allowed us to continue to grow in the disability football environment and provide opportunities to young people and their families who often miss out.

64+ young people with autism will take part a fun sporting activities and feel more confident in a social environment resulting in new friendships.

As the project has now been running for a few years there are very strong established friendships between the groups. During lockdown there was a lot of isolation for these young people so bringing them back into this environment has been a joy to watch. 87.5% of the parents/carers believe that taking part in the project has improved their young persons ability to communicate with others and improved their social circle.

D (12) has been attending sessions for a few years now. Mum S said “He was initially disinterested and unable to engage with peers or be part of a team. This will always be a problem due to the severity of his autism, but he is much more interested in his peers now and at times tries to join in which is fantastic! He is now very keen to engage with others to play with the ball. D is very active. He loves the football and it has sparked a real interest in sport.”

64+ carers will have an improved quality of life

The feedback from the parent/Carers has been incredible. Many spend their break doing different things however the camaraderie and friendships formed between them have been a particular highlight. 100% of the carers involved said they felt better supported in the caring role. The main reason for this was being able to confide in others and have people around them that understand the difficulties that having a young person with autism can bring.

A (10) has been attending for over 2 months now. Mum K said “It's always nice to speak to some of the other parents, being a carer can be a lonely place, but to speak to other people in the same situation, it helps, and it's also incredible to see A enjoying something so much. To see my son enjoying taking part in something and being able to let go of his anxiety is just amazing.”

64 + autistic young people will be more physically active and both the young people and their carers will feel more relaxed and less stressed.

For a lot of our participants, especially if they have only started the sessions this year, this tends to be the only physical activity they take part in out with school as their condition makes it challenging for them to take part in mainstream sports. Finding activities for the young people to take part in can be a real strain for the parents. There is a growing demand for sessions to be increased to twice a week. 100% of parents said that taking part in the sessions increased the amount of physical activity that their young person took part in.

T (13) has been part of the sessions since the beginning. Dad D said "It has given T a sense of belonging as she found it too hard to take part in mainstream football. It has improved the amount of exercise she gets which has been good for her ADHD. My wee girl waits all week for the football so she can meet her friends and has even met some outside of the football. It also gives her happiness when she scores a goal.”

Local boys/girls clubs coaches will feel supported in including young people with autism into their mainstream teams.

The Rangers Charity Foundation hosted a Autism awareness training session for local grassroots club coaches inside Ibrox Stadium. Due to covid guidelines at the time the numbers were limited however 8 coaches from 6 different clubs were able to attend. Training was delivered by Team United who focused on practical things you can do to included autistic young people in mainstream sessions. Nicole from Giffnock SC said " it was very informative, I feel much more confident in being able to adapt my training to accommodate autistic kids. There are a few in my current team so I'm hoping I can put this into practice." 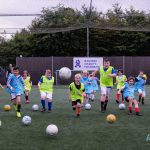