Autism Friendly Football provided a weekly football session for young people on the autistic spectrum between the ages of 6-16. The sessions took place on a Wednesday night at Prosoccer Newton Mearns over a 40 week period.

What Autism Friendly Football did

The sessions were broken down into 4 sections, warm up, technical practise, fun game and a match. Everything was delivered in a light-hearted way with the emphasis on having fun and making friends and loads of opportunities for learning new skills.

We put a lot of work into the design and development of the project to ensure the best possible environment for the young people. All staff went through specific training delivered by Scottish Autism and we took feedback from a pilot project we had previously delivered.

The venue has been a big part of the success of the project due to the options available for parent/careers. There is a quiet cafe area to relax, fitness classes and its located just 5 minutes from a large retail area. The most popular option for most parents is to watch the sessions and socialising with other.

The overall feedback from the project has been fantastic the biggest stands outs from both parents/carers and the young people is the new friendships that have allowed everyone to feel better supported.

The project incorporated 2 better breaks priorities: Complex needs – all participants taking part in the sessions were on the autistic spectrum and were able to take place at their own level, many of the participants had other support needs including learning disabilities, mental health issues and other conditions.

Sports and active leisure – By taking part in the session all participants have increased the amount of physical exercise they take part in, allowing opportunities to socialise, share experiences and make friends in a safe and friendly environment.

We originally planned to deliver 40 weeks but due to COVID 19 we were unable to deliver the last 2 sessions. In order to continue to support the families involved in the project we started to post weekly challenges online and send them to everyone involved which went down very well.

We were experienced going into the project as to what to expect however the wide range of the autistic spectrum and all the young people’s different triggers and needs still takes a while to fully understand, our best advice is just to be patient and allow the young people to learn and play at their own pace.

The parents/Carers know their young people best so utilising their knowledge is key to building relationships within the groups. The more information the coaches have the better they are able to plan and adapt to everyone’s needs.

When putting this project together we put the following in place to make it as easy as possible for the young people to feel comfortable and settle during the sessions: gathering information from parents/carers around triggers that can have a positive or negative effect their young person, creating a safe space in the venue where participants can go if they are feeling overwhelmed, sending out visuals of the venue, the safe space, the pitches and the coaches before the first session, ensuring the consistency of staff to allow participants to build relationships and feel comfortable in the sessions.

From feedback gathered the other thing we would note is that there are still a real lack of opportunities for young people on the autistic spectrum to take part in physical activity where their needs can be properly met. During the summer holidays is a particularly strenuous time for parents/carers to find activities that are available/suitable to their child.

This project has been a massive step forward in our disability football work. It has allowed the Rangers Charity Foundation to support families that we have not engaged with before and created positive links with like-minded organisations that will serve us well in the future. It would not have been possible to deliver this project without the funding and superb backing of the better breaks team.

Young people with autism will take part a fun sporting activities and feel more confident in a social environment resulting in new friendships.

The difference in the groups as the young people grew their confidence and started to build relationships with each other has been amazing to watch. There has been loads of friendships formed and families meeting up outwith the sessions. For some of the young people the Autism friendly football session is the only physical activity they are taking part in, for others it’s an extra activity that gets them active.

J (15) joined the sessions on week 9 when a space opened up, his dad Michael said “The transformation in J has actually been remarkable. J has not engaged in anything before beyond 1 or 2 session at most. He just lives from one Wednesday to another. Not only has he developed physically and mentally he is a far happier boy due to this experience once a week. It has also helped in his general fitness and coordination. J has always struggled with his communication but this has massively improved along with his ability to engage appropriately with different people. The coaches have been really excellent and hands on with him.”

The feedback in this area from parents and carer's has been overwhelmingly positive. Young people have been developing skills that they have taken away from the sessions and used in everyday life. Many parents have spoken about the new bonds they are building with their young person around their common interest in Football that has helped them to become closer.

L (7) has been attending the sessions from the first week mum Amanda Said “It’s been a huge relief to see L fit in and enjoy himself, The difference in him has been noticed in school, his confidence has improved so much since starting the Autism Friendly Football, he takes part in all activities in school now even gym" "He will now contribute his ideas to the class and did a presentation in front of his school at assembly. He loves to play and watch football since he joined the Rangers football club, he plays in the garden constantly practising and playing his dad, the football videos have been a god send during the coronavirus to keep him busy. He looks forward to going back to the training every week, the coaches are fantastic. His football technique has increased amazingly as well.”

Autistic young people and their carer’s will feel more relaxed and less stressed.

There has been great progress made in improving the physical and mental wellbeing of the participants, It has had a big impact on their self-esteem, confidence, ability to work together and improving their social skills. Parent/Carers also feel more supported in their caring roles, the relationship between the parents/carers gathering to watch every week has been a real positive, the sessions have been a fantastic social benefit and support mechanism for everyone involved.

Debbie has been attending sessions with son D (10) “The kids love it and it’s a delight to see them mixing with other kids, growing in confidence and making new friends, which they find extremely hard in a normal environment. D is socialising and for the first time ever he has made 2 friends that he now meets out with the club. The parents are also very grateful and benefiting from this experience. It gives us an opportunity to speak to other parents in a similar situation. We get to talk, share and support one another. Other parents do not understand some of our day to day struggles and mental health issues as a result. We are keen to keep this experience going for as long as possible.”

Local boys/girls clubs coaches will feel supported in including young people with autism into their mainstream teams.

The Rangers Charity foundation provided a training course delivered by Scotish Autism for grass routes clubs who wanted to learn more about how they can better accommodate autistic young people into their mainstream football clubs. An excellent course which provided clear insights into autism and how we can offer kids the opportunity to participate in football." - William, @BonessunitedCF Building links with local teams allowed us to transition some of our participants who were able into mainstream clubs. 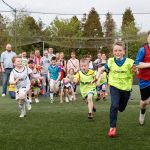