We provided monthly youth groups for young people with support needs in the Falkirk area, allowing their parents/carers to have a regular break.

In addition to this we offered two residential activity camps. The young people travelled to an outdoor education centre in Aviemore and took part in a range of adventurous outdoor activities.

What Better Breaks Youth Groups and Activity Camps did

This year we have delivered 11 youth groups and 2 activity camps, working with 19 young people and their families. Youth groups have taken place at Bonnybridge Community Centre and in a wide range of locations in the community. Following the science and technology theme which was picked by the young people we have visited places such as Glasgow Science Centre, taken part in a live science workshop delivered by Think Science, had a go at film making and digital t-shirt printing.

We have been able to recruit an additional mentor to join our other youth mentor. We delivered a training session to both mentors and have given ongoing support. Our first mentor who has now been in the role for almost two years has developed immensely providing practical support to the other young people who attend the group and acting as a good role model. She has also planned and delivered a sports session for the other young people.

We have continued to support many of the same young people and families. The young people we work with benefit from the support we provide and are developing socially and emotionally as a result of the increased opportunities and social interaction. Their families caring responsibilities remain high and we are committed to provide ongoing short breaks for them. We have also recruited two new young people to the group. Both have complex needs and are socially isolated.

Carers have used their free time to spend precious one to one time with other family members. Many of our young people come from large families. Over the longer weekend breaks parents often enjoy an evening catching up with friends knowing they will not need to wake up early to administer medication and care for their son/daughter. One parent used the opportunity to have a weekend break with her other son. this was the first time she had spent a night away from her disabled son in 18 years.

This service has had quite an impact on my daughter and myself. She has been given an opportunity for the first time (she is almost 16 years old) to mix with like minded children and for a short time, be independent of me. Her confidence is growing and her lack of social skills, social awareness is being challenged! All for the good. For the first time, she is actually looking forward to something that doesn't involve me and that is pretty awesome!

I also get the opportunity to have some very precious time to try and regain some sanity and do something just for me. The value of this should not be underestimated! In many respects, Better Breaks has been a godsend!
My son L attends the Better Breaks Group on a Saturday once each month. For L this is the only social interaction he has with his peers outside of school, it is extremely important to us as a family as L cannot go out on his own but when with the group it gives him a certain degree of independence away from us. I struggle to take L out to do the things he enjoys as I also have a young toddler, with such an age gap it is difficult to find something to do which will suit them both but going to the group ensures that at least once a month L gets to do something he enjoys. This is also the only respite we get as a family.
I just wanted to let you know how much T going away to camp meant to T and myself. T has never been away from home before and never been keen to join his friends away. Your letter came in again and I sat him down and asked as I have done so on each occasion before, and to my surprise he said he was going to try. He must have gained so much confidence from the staff who run the club on a Saturday that he felt ready to make this very big step of going away to camp.

The Action Group Better Breaks Co-ordinator came and spent some time with T and myself at home. This gave us the confidence we both needed that she would be able to meet his medical needs of a Gastrostomy. The coordinator was amazing and showed a great amount of ability to learn and pick up quickly and with great competent. This was needed both for T and myself in order to gain trust for T's time away. T was very nervous going in the car to meet the others to go to camp to the point he felt very dizzy. All staff were there to meet T and he was won over very quickly with the calm, caring fun loving staff.

T had such a wonderful experience of been away, for the first time in his life he was able to be with friends away from home. To be able to have this kind of club and link with his friends is such a major thing for him. Friendships for non disabled teens are in general, carefree and can often have the experience of meeting up and staying over/away with each other.

My son never got to experience this until he was 18 years old, when he felt close and confident enough in the adults around him from the Better Breaks Saturday Group. He was able to do fun things at his level, out doors sport and even getting up a tall tree! - even though he is frightened of heights. T had such a special time away. He is now ready for the next one. So fantastic to see him so happy in himself and the bonds he has with friends and that goes for the big friends too (staff).

This funding and the continuity of this has allowed us to build on the relationships made with the young people and their families. We have also had a stable group of staff who have delivered the monthly sessions and the camps, so the young people are relaxed and familiar with the staff.

Consultation with the young people about having a focused theme for the group sessions has allowed us to explore the chosen theme of “science” in a variety of ways, which has kept the sessions fresh and given new interest in a range of different activities. We have also varied the group sessions to include a few more outings that have allowed us to assist the young people in using a variety of public transport as well as walking to some venues when we reached the destinations.

New referrals have come to us via the school at Carrongrange and via the Child Disability Team in Falkirk. One challenge that we will have to think about moving forward is phasing out older members beyond a point where they have left school. We have not rushed to do this as we look at the benefits to each person, their development and maturity etc. However so many people have grown in confidence and their skills, the dilemma is at which point we say they need to move aside to allow younger members to be able to attend.
Top tips The Action Group's top tips for an organisation that wants to run a similar project

We have found an effective way to do a consultation with a group of young people with communication difficulties is to have an open discussion with everyone making suggestions verbally or using signing.

You can then take the most popular suggestions and make cards with the options represented with pictures for the young people to choose from.

If you are catering for a very diverse group of young people with support needs try to find activities that can be enjoyed on a sensory level.

Somewhere like Glasgow Science Centre has exhibits that can be enjoyed by all.

It is easy to develop a fixed idea of what a young person likes or is capable of. Continue to provide different options and challenges. Young people will often surprise you. 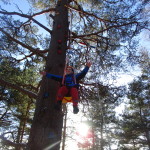