We provided respite for up to 30 families with a child, or children with additional support needs. We did this by offering extended opportunities for social interaction through a regular monthly Saturday group and 2-weekend adventure camps throughout the year.

What Better Breaks did

Day out to Livingston to Crazy Golf, McDonald's and Cinema to see DoLittle, WEEKEND AWAY TO LAGGANLIA OUTDOOR CENTRE FOR LEARNING -AVIEMORE.

We have between 17-20 young people that attend regularly each month. Letter and emails are sent with an itinerary mid-month for those wishing to attend. This gives parent/carer a chance to plan ahead and also lets the young person see that's going to be happening. (people were involved in choosing the activities)

When we are away the parents/carers get to catch up with their friends, go for days out, spend time with other family members, have time to go to the shops, go for spa days, housework or simply do nothing!

Our fun days at Elgin Park were a particular success as it gave us a chance to work with people from the community that volunteer to run workshops eg card-making workshop, belly dancing, mindfulness.

One of our biggest success this year was taking 17 young people to Blackpool, a first for many. We stayed in a big house and enjoyed a day at The Pleasure Beach and a day at Madam Tussaud's. We spent a lovely evening walking along the promenade marvelling in the illuminations. It was magical for the young people as a lot of them had never experienced them before. It was such a success as most of us were trying something new e.g spending time away from home and making new friends.

This year we have learned that it is important to reach out to new families who have young people coming into the better breaks age group as older ones leave. There are so many families out there that need respite and help to access new experiences and friendships and we have enjoyed getting to know new people who also have new talents and skills they can bring to the group.

The young people wanted to do Blackpool which had never been done before so with the young people we had to spend time looking for accommodation, transport and activities within budget, risk assessing and researching. We learned a lot from this and it was a huge success.

How The Action Group has benefitted from the funding

This funding and the continuity, has allowed us to build on the relationships made with the young people and their families. We have also had a stable group of staff who have delivered the monthly sessions and the camps, so the young people are relaxed and familiar with the staff. The links The Action Group has with other services e.g social work, Carrongrange School, other local organisations enables us to signpost parent/carer to other help available.

Children and young people with disabilities (aged 20 and under) will have more opportunities to have fun, develop friendships and do activities they enjoy. Many young people we have come across feel socially isolated, being part of this project would mean being less isolated.

This year we started with a meeting and asked they, young people, what they wanted to achieve this year, places that they have always wanted to go, things they have always wanted to learn or do and planned them in. We tried as much as possible to tie days out in with educational events. April Dynamic Earth and the Capcom Go exhibition. May, Stirling Old Town Jail and Comicon as a lot of the guys love superheroes. June we had a fun day at Elgin Park where we had baking, craft, dancing and a mini zoo where they could get up close and personal with creepy crawlies. then July Ten Pin Bowling, Pizza Hut and the cinema to see The Lion King. August to the Transport museum and around Glasgow on a heritage bus seeing all the historical sights. September-The Royal Yacht Britannia, We also went to Blackpool for the weekend. In October we had the Action Group AGM November was a Christmas craft day at Elgin Park. December, a Christmas Panto. January the Great Lanterns at the Zoo. February Crazy Golf and cinema to see Do Little.

SMcK was persuaded to join Better Breaks by his friend who has been with us for a few years. SMcK was apprehensive at first but when he saw how many of his friends were having fun he settled in. He came with us to Blackpool, the first time he had been away from home and had never experienced Blackpool before. He said prior to Better Breaks he spent most of the time in his room playing on his I Pad and phone, he admitted that his confidence and self-esteem has grown since he joined better breaks and had achieved so much. He loves how he now has choices and a voice that is listened to and can not believe all the places he has seen and all the new things he had done and learned over the year

Throughout the project, we continued to gather and report our learning and experiences, through individual feedback, evaluations, and case studies. We endeavour to identify key areas of learning, best practice, gaps/need for future provision, actions for improvement.

We are committed to improving and sustaining health and wellbeing through groups that we run and we are very good at tying things together to benefit all. In addition to the Saturday Group we ran an event where we got together with other organisations in our community and got them all together in one room and invited parents/carers to visit, have a cuppa and a chat to all the stallholders to find out what was out there for their young people with disabilities. We had benefits advice, guardianship and power of attorney advice, Disability Sports, Cycling without age and adapted bikes, different care companies for differing needs and we also had a wellbeing area where people could enjoy aromatherapy, massage, skincare demonstrations and nail care. Parents/carers feedback saying how amazing it was to have all these facilities in one place as a one-stop-shop as time for them is limited as are resources. People in similar circumstances also had the ability to chat and exchange ideas.

A young person that was coming along was having a difficult time at home, she wasn’t eating well and at times looked dishevelled. At times she was showing behaviours of concern. She came along to the group and joined in on the activities which were around taking care of yourself, exercise and eating well and she showed a real interest in what was on offer. When she came along to the Blackpool weekend we did her hair for her and gave her nice soap and deodorants. The next day she was desperate to do it again and said she felt amazing. We kept it going when we came home at the other group she comes to and she is now actively exercising and eating healthily. Things are improving at home too

Parent/ carers will increase their activities and relationships outside of their caring role, including spending time with other siblings where appropriate

There are two mums that meet when they drop their young people off and head off for a shopping and lunch day once a month. Another Mum takes herself away to a spa day. A single mum drops her son off and that allows her to take her 2 young girls to ice skating lessons and lunch. One of the mums cares for her daughter and her husband and finds this a real struggle to juggle both. She arranges respite for her husband the same day we take her daughter and this gives her a well-earned day off. Prior to Better Breaks, these people had no time to embark on any of these activities and were stressed, anxious and lonely

A young girl joined our group this year as she was friends with a boy that lives across the road from her that is in her class at school. The families only knew each other to say hello to. They got chatting when they dropped the kids off with us and ended up becoming friends. They now meet for lunch, drinks and when we went on our last weekend away they went away to a lodge up north with their other kids. A lovely friendship has now been made thanks to Better Breaks respite.

Unpaid carers will be able to plan ahead in the knowledge that the person they care for is in safe hands. This will enable them to plan ahead thus reducing problems with their own health and as one person said “the group it stops them reaching breaking point”

It is important for parents to look after themselves so they can give 100% to their caring roles and a lot of the time the parents are exhausted and in desperate need of a break to recharge their batteries. We plan with the young people what and where we are going throughout the year and the dates of the days out and camps are issued at the start of the Better Breaks year so parents/carers can arrange their lives around them. For instance making appointments with doctor, hospital, hairdressers or nails or even go to the gym. Some of the families plan weekends away with other siblings when we have our weekends away. A father uses the one Saturday a month to look after himself, he goes to the gym for a workout and a massage and then gets his haircut. This recharges him and makes him feel like he has time to himself.

A young man’s single parent is struggling at the current time with his son. His son is having difficulties understanding the boundaries of social media. He is having to spend more time than normal at home as a result of a situation that happened because of this. At the same time the parent has been unwell, he was having to attend hospital and was worrying about how he would cope. We liaised with the parent who explained the circumstances to the hospital and with good communications it took place the Friday that his son was attending the weekend camp so he would have Saturday and Sunday to recover. This took a huge amount of anxiety away from him and gave him the head space to deal with his own health issues. He could be more prepared for resuming his caring duties when we brought his son back home. 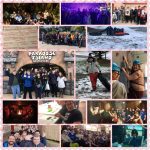