A story by Rangers Charity Foundation

The Rangers Charity Foundation provided the opportunity for young people with a Visual Impairment to take part in free football sessions in a fun and friendly environment whilst allowing their carers to enjoy a break from their normal routine.

What Blind/Visually Impaired Football Sessions did

The project delivered 25 Visual Impaired (VI) football sessions from April 2018 to March 2019. The sessions were every second Sunday and were hosted at Glasgow Club Drumoyne. These sessions were split into 4 different components:

Independent learning – players could work by themselves, with peers or their carer’s to come up with their own games, skills, drills or anything they wanted to work on. This allowed individuals to express themselves and communicate what they wanted to do.

Structured coaching – the coaches would work with players to go through drills suited to the different levels of ability of the individual players. This included lots of teamwork activities allowing players the opportunity to work together to complete tasks.

Games – the highlight of any football session is always the game. The young people compete in an enclosed pitch and rules are adapted to ensure everyone has a level playing field.

Social time – all sessions finish with some social time for both the young people and parents/carers to relax and enjoy each other’s company.

The young people that attended the Football aged from 5-16 years old and the project met 3 of the better breaks priorities, Complex needs, Visual Impairment is often accompanied with other needs, most of our young people struggle socially as well due to their disability and some can’t make eye contact and read facial expressions.

Sports and active leisure – by taking part in the sessions our young people are increasing their physical activity and for most it’s the first time they’ve been able to be involved in a team sport. Independence – the sessions allow players to express themselves.

Most of the carers have shown a real desire to take part in the activities with the young person which has helped enhance their relationships through a common interest. This has been an added benefit of the project.

What Rangers Charity Foundation has learned

We have learned that there are still not enough opportunities out there for visually impaired young people to take part in sport or physical activity.

As it’s the first time we have delivered this project there has been a lot of learning to take away from it. The huge differences in range of visual impairments of the participants was originally challenging for the coaches however they have adapted the session fantastically to be as inclusive as possible for all the participants.

Our approach to utilise the knowledge which the parent/carer’s have of their young people worked extremely well. Our coaches were able to gain a lot more understanding of the disability which helped them better adapt sessions due to the open communication and relationships they developed with parents.

Using links with VI units in schools has been a massive help for us in terms of spreading the message of what we are doing, we also linked in with a number of Blind/VI charities to promote the course within their networks. Creating a video was a good way to spread the word of what we were doing in the project.

Feedback from this year’s delivery has helped us make improvements for season 2019-20.

How Rangers Charity Foundation has benefitted from the funding

Without the backing of the Better Breaks Funding the Rangers Charity Foundation would not have been able to run this project. The partnerships we have built up in making this project a success has increased our network and allowed us to create new opportunities to expand our work in disability sport.

The young people really enjoyed the football sessions and got a lot of added benefit from taking part, having fun along the way. After the first few weeks the young people really grew in confidence with their football ability but also in communicating with the coaches and their peers. The social element of the course was fantastic and there were a lot of strong friendships made both by the players and the carers.

H is 9 and had a great time during the project. Mum said “H can find it difficult to make friends but since attending the football she has become a lot more confident to try new things. She really looks forward to coming and has even gave a presentation to her classmates in school about her visual impairment” H said “the thing I look forward to most is seeing all my friends, I’m going to play football for as long as I can”. H has also started to play football at her school, although the game is too quick for her and she can struggle to follow the play it’s great that she is taking part in more football and mixing with another group of young people.

Blind/VI young people and their carer’s have improved health and well being by feeling more relaxed and less stressed.

There has been a double benefit for this outcome as by taking part in the sessions it is improving the amount of physical activity the young people are taking part in and has had a positive impact in their physical health, it has also had a huge impact on self-esteem, confidence, ability to work as part of a team and a better social circle. The social part of the sessions have provided platform for parents and carer’s to share information about other activities and build relationships with others in similar circumstances.

Clair (parent) has been taking part in the sessions with son C (13). Clair “It’s been amazing for C as I can really see a difference in him, he has come out his shell so much and looks up to the coaches, He’s just so happy when he is here”. “All the parents get on so well, we see the benefit it’s having on the kids and it’s great to speak to others that understand the challenges of Visual Impairment”.

Blind/VI young people and their carer’s will have an improved quality of life.

Feedback from parents/Carer’s has been excellent. We have been really surprised that so many of the parents/carers have wanted to get involved in the actual activity as we had expected more of them to take up the other options that the venue has to offer such as the gym and coffee area but the vast majority of carer’s have took part in appropriate parts of the session

Clair (parent) has been taking part in the sessions with son C (13). Clair “We had seen it advertised so we thought fantastic idea. C was so keen to get involved because he can’t play normal football as it’s too fast for him. Without sessions like this there would be absolutely nothing for him. C loves the sessions he wishes it was on every week. It’s been great for me to take part in little bits of the football with him; he enjoys it so much it’s amazing to be part of it”. 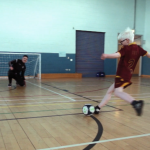