A story by The Broomhouse Centre

We provided a weekly support group for Young Adult Carers aged 16 plus with a caring responsibility for a family member over and above the average young person.

The group provides support for Young Adult Carers in the form of advice, information, issue based sessions and bespoke one to one support from a dedicated Young Carer Support worker.

What Broomhouse Young Carers did

The group was managed by the Project Manager and run by a Project Worker and Sessional Worker and one volunteer. The Volunteer recruited to work within the group came from previous work in the Project because she had a particularly good rapport with the Young Carers.

The group was advertised via current networks with Social Work, Schools and School Leavers, the College network and other Young Carers Projects who had a cut off point of age 21. The group consisted of Young Adult Carers who had turned 16 and had been working with the project over an extended period of time as well as new referrals from Edinburgh Young Carers, Social Work and Counselling Services.

We ran the group from January 2015 for 42 weeks for 2 hours per week and offered bespoke one to one support sessions outwith the group for those who needed more support. The sessions took place at The Broomhouse Centre and included activities outwith the Centre. The programme was designed by the Young Adult Carers and included activities such as issue based sessions on healthy relationships and alcohol and risk taking behaviour, healthy eating cooking sessions, beauty sessions with a qualified therapist, and activities such as trampolining and Bubble football .

The Programme also made space for a 'drop in' session every other week. This allowed the Young Adult Carers to drop in anytime within the 2 hours allocated to access support with College applications, benefits forms, housing information, advice and support with their caring role and a chance to catch up with the one to one support worker. These sessions included cooking and eating food together. The Young Adult Carers wanted the 'drop in' aspect since some of them worked or attended College and struggled to attend the group on time.

JW joined our Young Adult Carers 16 project in summer 2015. She cares for her Mother who has extreme anxiety issues, depression and agoraphobia. JW seemed to be very shy, quiet and lacking in confidence, she rarely left the house and was reluctant to join any groups in the area. She was very much encouraged to join the group by her support worker and felt that it would give her the opportunity to, "meet new people and work on building confidence".

She said she felt safe in the family environment in her caring role, but that it restricted her and meant she was not included in the community or social circle. After participating in the Summer Programme with other Young Adult Carers JW dramatically changed. Her self-belief and confidence improved immensely and she began to smile and 'light up'. One time in particular JW completed the entire ropes assault course across water at Fox Lake Adventures in Dunbar with virtually no prompting from workers.

JW was delighted with her achievements and was keen to come on future outings and join the group on a weekly basis. JW attends the Young Adult Carers 16 plus group every week and has fed back that the group helps her, "talk to people, work together and build my confidence and social skills"
AM came to us as a Young Carer and has been with the project for nine years. Upon turning 18 when asked where else she would access support as a Young Adult Carer she replied, "No where, I love Broomhouse Young Carers too much" Funding from Creative Breaks allowed the Young Adult Carers 16 plus group to go ahead and as a result we were able to continue to support Young Carers beyond the age of 18.

In AM's case, over the years, she made great leaps in raising her confidence and self-esteem, dealing with anger and accessing counselling. AM accessed one to one support from our Young Carers Support Worker to complete a college application and access an NC in Social Sciences at Edinburgh College, she attends the group regularly where she says, "I feel safe and welcome" and she continues to receive support to sustain this educational opportunity. Ultimately, her goal is to become a Youth Worker and we feel confident she will achieve this.
CR cares for her Mother who is terminally ill, her Grandmother who has dementia and her younger brother who has learning difficulties. She attends the support group every week and accesses one to one support from the Young Carers Support Worker. She has often reported that her caring role leaves her feeling, "torn, tired and overwhelmed, pulled in different directions".

CR has accessed a confidence building residential with the Young Adult Carers 16 plus group and, as a result, felt it was time to do something she wanted to do. CR has always been very capable of getting paid employment and recently got a job as a catering assistant in a University Café. The support she receives from the service takes the form of the support worker putting support in place for the family so CR can continue to work and sustain her caring role.

She reports that, "I feel more supported and I feel more confident, my one to one sessions with the support worker have helped me more than any other services I've had; she is one of the best people I know". CR continues to attend the group on a weekly basis and feels she can get support to sustain her caring role. She says, "I get all sorts of support from Young Carers, someone to talk to, advice. If I have a problem I know they will help"

What The Broomhouse Centre has learned

The fund made a huge difference in that it meant we were able to offer a continued service to Young Adult Carers aged 16 plus who would otherwise leave our service at the age of 18 and no longer be able to access support from the Young Carers Project.

An unexpected challenge was finding 'hidden Young Adult Carers' - we found that despite publicising our project via our networks, schools, colleges and other young carers projects, very few 16 plus Young Carers came forward. We will address this by working in partnership with other Young Adult Carer projects in this area in 2016 to speak to School Leavers and College students and set up a series of awareness raising sessions to reach 16 plus Young Adult Carers

We have built a long and trusting relationship with our Young Carers over the years, therefore, the transition into a Young Adult Carer/16 plus group was relatively smooth, new referrals tend to access one to one support rather than using the Group as a support base. We have a good relationship with the Young Carers and we have been able to offer a more personalised service; we know them and we understand their needs

We have networked with other Young Carers projects in particular, Edinburgh Young Carers who cease support at 21 years, we have 2 referrals from them and we have spread 'word of mouth' information via other members of the group, as previously mentioned, attracting new carers to the project seems to be an issue right now, not just for our project.
Top tips The Broomhouse Centre's top tips for an organisation that wants to run a similar project 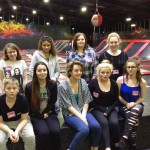