We delivered a fortnightly carers support group to provide a mechanism of support for carers of South Asian Older people to get some time out for them selves to take part in therapeutic and educational activities away from their demanding and pressurising caring roles.

What Carers Support Group did

A carers support worker was employed to organise and deliver the project. An activity programme was in place at the start of the year to inform carers of sessions, activities trips and events were organised taking into account carers choices and suggestions. Group meetings took place at Norton Park in the afternoon, as this was the best time which suited the majority of carers. The support worker was in touch with group members by phone to remind them of upcoming meetings. Regular publicity was carried out to encourage new members to join the group who fell into the carer criteria as well as recruiting through word of mouth.

In the past year, carers participated in the activities detailed below, which has provided them with some quality time out for themselves away from their demanding roles. Having some me time to relax and de-stress has had positive effects on the cared for person as the carer is not as pressurised and in a better frame of mind. As the programme of activities is given well in advance, carers are able to seek appropriate cover for someone to look after the cared for person.

As well as the above activities we also provided information/advice sessions to provide relevant support for benefits, housing, hospital discharge packages and other areas of work. 1 volunteer was recruited to provide support alongside the carers support worker and plan activities.

One carer was very stressed and had not had any time out for themselves since the last 2 years, when her parents fell ill, having the responsibility of looking after both parents was very demanding and she fell into depression herself.

The carers support group was introduced to her through a health link worker and she was encouraged to join. Since joining the group the carer feels her mental health has improved and she feels comfortable to be able to speak to people in the same situation as herself. She now looks forward to the fortnightly sessions and enjoys the sessions such as exercise and massage therapy
Information advice was provided for a young carer under 25 looking after her terminally ill mother. Through our project we ensured they were in receipt of correct entitlements and they were supported to secure housing more suited to their needs. The carer emphasised how relieved she was and a weight was lifted off her shoulders as they were now financially better off as well as in better housing.

The carer was also provided support to receive a culturally appropriate care package for her mother so that she could continue to study without feeling guilty that her mum was not well looked after in her absence.
Carers have limited time and are unable to go on family holidays as have difficulty arranging someone to look after the cared for person. Carers took part in an overnight trip which they found relaxing, stress free, therapeutic. Carers felt physically, mentally and emotionally better and all seemed in a better frame of mind, which all has positive effects on the cared for person.

We have learned that caring is becoming more and more demanding as resources and support is becoming limited, with carers often having to leave their jobs so they can look after the cared for person full time. This can leave them financially worse off and at the risk of losing their homes. Having an information advice service through ourselves has very much helped them gain correct entitlements.


We learned about the challenges that south Asian carers have of obtaining some time out for themselves, they feel guilty for leaving the cared for person alone or with someone else, and this can deter them from attending the group sessions.

We organised an overnight trip which was very successful and we had a lot of interest from carers who look after their grandparents and who also benefitted from the social interaction with others in the same position.
Top tips Milan Senior Welfare Organisation's top tips for an organisation that wants to run a similar project

Understanding the needs of carers and the barriers they face to access services to ensure their needs and expectations are met.

It is vital to provide sessions which promote therapeutic activities which encourage some relaxing time and a way to de-stress from demanding responsibilities.

Having suitably trained and skilled staff in place, and providing opportunities for volunteers. 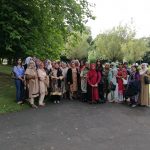