Milan provided a quality break for carers/ex carers from South Asian communities in Edinburgh and The Lothians who care for older people, giving them opportunities of therapeutic/educational sessions which is otherwise not possible due to their demanding and stressful roles.

What Caring for Carers did

Milan has been in existence for over 25 years and has a good link with the wider community and we have further established good contact with carers through our work with older people. The work we deliver is focused around what carers can benefit from and we work around their needs which is identified through surveys and regular focus groups.

We aim to provide sessions which are preventative and have a positive impact on their health and well being as well as raising their confidence and self- esteem and making a difference in their lives. Carers were able to have even more choice this year as we delivered both afternoon and evening sessions which were taken up very well. A varied programme of activities was enjoyed by all with opportunities to participate in walks, exercise, massage therapy, trips and outings and get together events. Sessional workers were booked to deliver activities and volunteers helped with organising the support group as well as enhancing their own skills and training via opportunities within Milan.

The carers group have built a good rapport and trust relationship with us, with 20 carers accessing our information service. to seek financial, housing and help with income maximisation, debt matters and hospital discharge packages. We found that carers came with one query but after a full assessment there was much more work to be done in order to ensure the clientele was supported fully.

Having to care for someone leaves very less time for one to concentrate on their own needs and organise anything out with their responsibilities, hence when we organised trips they were taken up with so much enthusiasm and excitement as were able to do something for themselves.

Through word of mouth we are absolutely delighted to see the group grow from strength to strength and this year we were able to support a further 29 new carers in various areas of our work.

Having carers that are well looked ensures that the cared for person is also relaxed, which has a positive effect on their own health and well being

Dealing with unexpected challenges. Being positive and good word of mouth feedback increases interest in the group an it can be very difficult to turn people away for trips due to being completely full. Finding other sources of funding to accommodate increasing numbers.

How Milan Senior Welfare Organisation has benefitted from the funding

We have very engaged communities through this work and carers who feel very supported and at ease. We have raised their awareness and introduced them to new activities and this has all strengthened our organisation. We have enhanced staff and volunteer skills through the training project and able to provide hands on experience of organising and delivering group work to volunteers through this project

Carers group have had raised self esteem and feel a lot happier through meeting others in similar situations and having the opportunity to access the activity programme which has positive benefits to their health and well being and which also effected the cared for person, as the carer went home relaxed and able to cope with the demands of the role in a better way. We found that the group encouraged each other and were confident to increase their social development and meet each other out with the group time too. The outcome was achieved fully as we know that the activities benefited our groups and we received a lot of interest from carers to join the group through positive reviews through word of mouth. We were delighted to have carers join swimming sessions which they had never experienced before and learn something new through the group workers support and encouragement.

A group of carers who had never experienced in the water activities such as swimming were encouraged to participate in female only evening sessions. Having someone there they were comfortable with to support them was their biggest encouragement in attending. Through regular sessions it was noted that the group became water friendly, comfortable and keen to learn to swim, something that they thought they were not able to do due to lack of self confidence and believing in themselves. We also had carers joining in trampolining something which they had never participated in before which was thoroughly enjoyed and talked about for weeks after the activity. Being able to do something for themselves brings out the best in people and they are able to face new challenges.

Carers will be better equipped financially through our information advice service and be better off financially. Better supported to discuss issues and have more awareness. More recharged and energised and less pressurised. Able to enjoy the outdoors through trips and having time away.

Carers were supported to access financial advice/income maximisation and other support through workshops and one to one appointments providing them with awareness of ways to save money on household bills, housing issues, debt matters and hospital discharge packages. We received a lot of queries through word of mouth after receiving positive feedback through successful cases having people better off ensures that we are supporting them mentally which also promotes good physical health as the person has motivation and is able to be independent as well as, be in control of their lives. We provided support to carers at times of distress when the person they are looking after passes away carers accessed the service for us to notify authorities of the death and to cancel all benefits taking pressure off them Through our work were also able to get free leisure cards for carers to encourage them to access a wider programme off physical activity at their local leisure

We supported a carer who was very quiet and refrained and their initial contact with the organisation was through information and advice work. Building trust and ensuring that we were supporting them in the best positive way we encouraged them to attend the carers support group session to see if this was something that they could join regularly. The carer was more or less housebound with caring for the older person and their young children. We supported the family to get extra support for the elderly person so that it was possible for the carer to get out, especially whilst children were at school. The carer thoroughly enjoyed the therapeutic sessions and became a regular attendee, making friends within the group and feeling much better within themselves and not feeling guilty about taking time out for themselves. Having stress free time out for this carer also meant that the cared for person benefited as the carer was came back more relaxed.

Carers will feel more active, energised & stress free emotionally stronger and in control & better within themselves and less pressurised and anxious and more at ease and relaxed then more independent and confident to do something for themselves and have opportunities of participating in trips.

Carers had very positive experiences with the varied activity programme which enhanced their physical and mental well being. Trips away were thoroughly enjoyed giving them opportunities to get together with people who have similar lifestyles and responsibilities and they could understand each others issues and burdens. We received a lot of interest and gained 29 new carers over the year this is because people felt very positive about the project and were at ease to to take part and join the group. We know carers have lack of opportunities to participate in trips as have lack of time to organise and do anything for themselves, and this is the reason we had very popular and well attended trips. The feedback received during the trips was very positive with carers feeling that they were able to do something for themselves and feeling active and energetic and able to do something that they have never done before.

Through the group we were supporting a carer who was suffering from poor mental health due to a recent bereavement and was finding it very hard to cope. Home- visits were provided to the carer to give them moral and emotional support and sharing some of their grief. Maintaining contact with the carer in this difficult time ensured that they were kept connected within their community and felt less socially excluded. Eventually within a few months, the carer started attending the sessions once again and gave us feedback that they had only started smiling again through our group, and their family also mentioned that the carers mental health would have further declined if they had not received the appropriate help at the right time through the carers support group. This was one of the reasons they were able to sustain their caring role without giving up as this is how low they had started to feel due to the circumstances. The cared for person felt a lot better and at ease as they could see the carer feeling more optimistic about life and had something to look forward to.

Increased level of support was provided by our support worker and volunteers when we identified that one of our carers members was suffering from severe depression due to circumstances in their life. We supported the carer to feel less helpless and referred them to appropriate counselling and other services for further support as well as maintaining our contact with them in their time of need. This ensured they felt less isolated and socially excluded and the feedback we received from them was that if we had not given the one to one support they would have had a nervous breakdown as was feeling low and very down.

Supported 1 carer from being homeless through our information advice support

Information advice worker attended social worker and housing meetings to ensure the carer was well and appropriately supported as had limited command of the English language. The carer was at risk of being homeless due to issues with the landlord, being supported at the right time ensured that we were able to advocate on their behalf and seek alternative housing so that they were not left in homeless accommodation which might not have suited the cared for person. The carer is very comfortable in their new housing and is coping well with the change. 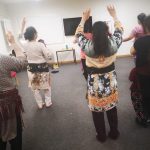