A story by Getting Better Together

Caring Matters provided a weekly informal meeting opportunity for carers living in the rural locality of Greater Shotts. Providing community transport where required, carers are able to access information, support and relaxation therapies in a safe and confidential environment.

Where respite support is unavailable, carers have the choice to bring along their cared for and they supported in their own activity by qualified support workers and trained volunteers. The group meeting also facilitates the opportunity for couples and family carers to enjoy quality time together through providing support to participate in joint activities.

What Caring Matters did

Throughout the life of the project we have engaged with 26 carers, 11 of whom did not previously engage with any other support service. Of those carers who attended the group 9 couples, one mother & son, two daughters and mothers and one daughter and father, took the advantage participating in Joint activities.

The Group facilitated 2080 hours of group support in addition to empowering the carers to organise an additional 4 full days which took the form of away days planned and organised by the carers themselves. The venue chosen was in a central location to reduce travel time as far as possible and was fully accessible. Participants were very much at the forefront of developing the group activities, participants were encouraged to lead on the activities as far as possible. The support workers empowered the carers to help direct what activities they wished to participate in from arts & crafts to relaxation techniques, healthy eating & budget cookery and various holistic activities.

A number of carers brought their own knowledge and skills to the table. One carer was a trained exercise therapist and she provided chair based exercises to the group, another trained in Reiki provided some sessions to carers. Others were found sharing their experiences and tips on caring responsibilities. The group was fortunate to benefit from the experience of two support workers who were known to many of the participants , both carers and cared for. This resulted in trust being established very quickly and personal outcomes identified and achieved .

Mr F is the main carer of his wife who has early onset dementia. Mr F has his own physical health issues which impact on his ability to fully look after his wife at home. Mr F was signposted to the group via the SWFT befriending service. Mr F had confided in staff that he was having difficulty trying to bathe Mrs F. He was unaware of homecare services and adaptation services available from the local authority and the Life Curve website which help determine best possible aids.

Support staff were able to link him into advocacy support services to help guide him and his wife be guided through the whole process. Mr F now has revised home support to help bathe, and an OT assessment has been undertake along with consideration to apply for sheltered housing. Mr F is now aware of other support mechanisms with in his community. He has reported that he feels better in himself and has a good outlook for the future. He is making plans for holidays and his new home.

It has been observed that Mr F's appearance has improved and that he appears less agitated whilst in the presence of Mrs F. in public. Mr F participates more in activities within the group and in particular chats more to other men present. Mr F is more comfortable now whilst out in public with his wife and now feels more able to participate in other groups in the community.
J is a young adult juggling caring responsibilities between the care of his grand mother and college. J was resistant to coming along to the group initially. He states that he came along as it gave him somewhere ' warm' and different to take is grandmother without costing an 'arm and a leg' and that it gave his grandmother some social time away from the home. A bond of trust grew between J and a volunteer. It was noted that J was skipping classes to ensure that he was home in time for Gran's evening meal times.

J was supported to speak with home support to instigate additional support to allow him to remain later at college certain days. Gran was also linked into other community activities, befriending and community transport again lengthening the opportunity for more free time for J to participate in college life.

This resulted in J reporting he felt better about his caring responsibilities and more able to discuss his needs with appropriate agencies such as Home Care and college student support.
J a young adult carer who was juggling care of his grandmother and studying benefited from accessing the group through support and information which allowed him more time to access opportunities out with his caring responsibilities. J was studying Sport Science at college and as part of his community placement he was permitted to use his time with the group as practical evidence of his skills.

J was a qualified Tai Chi Instructor and led the group for 10 weeks on a chair base exercise and Tai Chi activity. Through his share of skills he empowered the carers, cared for,volunteers and staff to participate safely in improving their physical and mental well being.

What Getting Better Together has learned

Through the existence of the group we have highlighted the need for additional support for carers living within rural area of greater Shotts. The fact that the service has been delivered by a trusted and well known provider in the area meant local carers engaged more easier.

Delivering within the locality resulted in reaching more carers and reduced the one and a half hour travel time for carers to access similar services and encouraged some hidden carers to engage with services and their community. Through delivering this training staff in the organisation are better aware of carers needs. 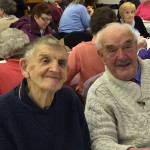