We provided 1:1 and group befriending for children and young people with learning disabilities living in the Scottish Borders. Activities included outdoors Wildplay, art, craft and film projects and overnight trips.

This improved their quality of life and gave their family carers the chance to enjoy a life outside of their caring role. The service was delivered entirely by volunteers, most of whom were aged 16-18 years.

Many volunteers were already in place and we recruited more from High Schools and Borders College in June, they were ready to start when we re-formed the befriending groups after the summer break, and some were also linked 1:1.

We reached families through schools, statutory and third sector organisations and directly through local publicity and our website. We accept requests for service in respect of any child or young person with a learning disability or autism.

There have been 33 1:1 friendships and 63 in groups. These have involved a total of 81 children and young people aged 8-20 years. 1:1 links met weekly, fortnightly or monthly. Friendships involving younger school-age volunteers usually met at the members’ homes and did activities such as playing computer games, making paper models, scrap-booking, cooking and listening to music.

Where older volunteers were involved, community activities included going to cafes, playing pool and shopping. More ambitious outings included a trip on the new Borders Railway with a day in Edinburgh, outings to Holy Island and Carlisle and an expedition with ten-pin bowling and a meal.

Twelve befriending groups met fortnightly in Kelso, Hawick, Selkirk and Peebles. They did the same range of activities as mainstream youth groups, pottery, music, quiz nights, arts & crafts, party games, Burns Nights, cooking, dressing up for Halloween parties and expeditions to see shows. Larger projects included, Extreme Survival on a Wild Harvest, a healthy eating project taking group members back to the wild to harvest naturally grown produce, prepare and cook it. The Great Scottish Borders Bake-Off film, a play about The Broons looking at the clash between the older Broons and modern technology. Four of the groups also went on overnight trips to Netherurd Activity Centre, Edinburgh and (a joint trip for two groups) Musselburgh.

Carers used the respite to meet other parents, do evening classes and spend quality time with siblings and spouses. Several also enjoyed getting involved with our activities becoming volunteers, joining management committees and helping with social and fundraising events.

Geena has learning disabilities and is been a member of one of our befriending groups.

Geena says: “I love the group. It’s so good to meet up with my friends. Now that I’ve left High School the group is a great way of keeping in touch with friends. I loved making the film with Mandy and Tom and everyone. It was very funny, and I loved having an acting part in it. I like the way we do lots of different things at the group. I really look forward to it every fortnight.”

Josie (Geena’s Mum) says: “Through the group, Interest Link offers a terrific social opportunity for my daughter, As she has grown up through her teens it has gradually become more difficult to keep a social circle going. The group helps to fill this gap, and is therefore very important. My husband doesn’t drive any more, which means I spend a lot of time driving my daughter around, so it’s a great relief when, once a fortnight, the minibus comes to pick her up, and delivers her back home at the end of the evening, a much appreciated respite for me.

Interest Link is always highly professional, very good at communicating information to my daughter and to me, and is also very responsive an invaluable service. I can’t emphasise enough how much we appreciate the group.”
Brendan an extremely shy child who initially was on his own in the corner with an ear piece listening to music. His confidence was very low, and he was very apprehensive to say or contribute anything to the group. Peer mentors sat with Brendan on a one to one basis to chat to him, he especially likes music and talked a lot about different genres of music that he listened to. He slowly gained confidence to talk more, speak his own mind and became more involved.

When the group decided to do “The Broons on the Borders Railway” (a drama project), Robert was given the opportunity to take on the responsibility of camera man, and took his role very seriously. He would chat about his role and was encouraged to think about ways in which he could utilise the camera in a more creative way. With support from Peer mentors and staff, he relished the task he was set, and rose to the challenge. The Broons has been such a success that another Broons film is planned.

Brendan is now the sole controller of all the videoing and this has significantly increased his self-esteem. He is able to work the camera and think about how his creative videoing has an impact on the final film. He is instrumental in this process and does not need to be asked or supported with this task. The added bonus was to have a trip with his fellow group member to see a live show of the Broons on stage in Edinburgh this year.

All group members sang and talked all the way home about the experience and they are all fired up to work on another sketch of the Broons, “The Broons Return”.
Ricky has learning disabilities, he is 11 years old and lives with his mum and his brother and is home educated following issues at school and his mum was keen for him to have social opportunities with other children. Mum was concerned that Ricky may struggle to join groups as he was reluctant based on past experiences.

Ricky was nervous and slightly reluctant but his mum encouraged him and we were delighted to see him settle in so well he has enjoyed film making, baking sessions, paper tissue floral craft and movie night so far.

His mum is delighted to see Ricky socialising and making friends in a safe environment with children of similar age with varying challenges in life and says it helps him with confidence. “Having a 'Youth Club' gives him some independent time without Mum/Brother!! To be part of something and one of the gang is so important to children that have social issues and other daily struggles!! I think Ricky has settled well and the group will be of great benefit to him!!

For me the fact that Ricky is involved and happy is the most important thing and makes me happy!!”

She says the benefits to herself include: “Gives me a little free time (respite) to do as I want, having some quality time with James [Ricky’s brother], going for a swim, shopping etc etc!! Very important as Ricky is home schooled and I’m the only parent!! I am able to relax as I know he is safe!!”

We learnt that children and young people with learning disabilities can be (unsurprisingly perhaps) apprehensive about staying away from home, but seeing the fun their peers have had on a trip makes them want to join in with the next expedition.

Children and young people are genuinely interested in healthy eating and seeing how food is gathered, processed and prepared, particularly if they get their hands dirty in the process.

We learnt that carers of children and young people with learning disabilities often discount the respite benefit to themselves of activities that the person they care for gets involved in. They are sometimes not used to thinking of their own well being.
Top tips Interest Link Borders's top tips for an organisation that wants to run a similar project

Involving volunteers adds an extra layer of difficulty to service delivery, but it has the crucial ability to create real, equal and sustainable friendships in the way that no other service delivery model can.

The personal rewards to volunteers of befriending children and young people with learning disabilities are considerable, and you should not be reluctant to say so when recruiting them. 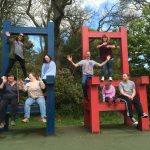