We provided 1:1 and group befriending for children and young people with learning disabilities living in the Scottish Borders.

This improved their quality of life and gave their family carers the chance to enjoy a life outside of their caring role.  The service was delivered entirely by volunteers.

What Children & Young People's Service did

Services and activities have been as planned. There have been 34 1:1 links and 66 in groups. These have involved 85 children and young people aged 8-20.

1:1 links met weekly, fortnightly or monthly for a variety of community activities such as playing football in the park, going to cafes, playing pool, bowling, cycling, visits to shops and swimming. More adventurous trips were mainly to Edinburgh, taking in the Castle, Zoo, Commonwealth Pool, concerts and shows.

When younger school-age volunteers are involved, they often meet at the child’s home and play games, watch DVDs, draw, listen to music, walk the dog or do some cooking.

Eleven befriending groups met fortnightly in Kelso, Hawick, Galashiels and Peebles. There were more volunteers than children and young people with learning disabilities in the groups, giving them the feel of mainstream youth groups that we seek to achieve. The groups did a mixture of social and leisure activities such as art and crafts, baking, music & games evenings, outdoor/physical activities (e.g. Dodgeball, Rounders & Volleyball basketball, soft tennis and badminton, Boules & Skittles), pottery.

Sometimes they did more focused projects over several weeks, for example: Three groups had talent shows, two of which are on our website, A Hawick group made a film about a Broons’ trip to Blackpool, A Kelso group made a Gangnam music video.

With Anna Craigen in the Walled Gardens at Wilton Dene Park: people built tents, had water fights, created sculpture s and models out of bits and bobs found. Bonfires were made, marshmallows toasted, sticks carved, and bird and bat boxes created.

Right at the end of the year, two more films were made with the assistance of a BAFTA-winning director and one group “turned the tables” in a healthy eating project designed to improve parents’ diets. We also had our first overnight trip, to Edinburgh.

Carers did a wide variety of activities such as taking time with siblings, meeting up with other Interest Link carers, rebuilding their own community connections, doing evening classes, relaxing and take stock. Several also sat on our branch committees and Board.

Previously we had not done long projects with the children’s groups (8-15 yrs old). We did more of these this year, particularly in drama and film, and found that the group members were well up to the challenge. We plan to do more of these projects if our funding applications for a further project are approved, and have already planned three in outline.

The desire to more physical and outdoor activities came across strongly in the large survey we did in Year 2, and was again emphasised by evaluations this year: all 6 children in the Tweeddale evaluation highlighted them when asked what they would like to do next. We have accordingly increased these kinds of activities and have more planned for next year.

We also learnt that overnight group trips were practical and that the personal care issues which had previously dissuaded us can be overcome by taking a carer with us. The carer can themselves have a break in the daytime when personal care is not an issue. 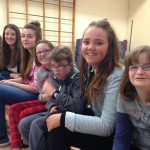