A story by COJAC CENTRE

We supported children and young people through transitions which are difficult, problematic and where they can be ill prepared, we helped by addressing self esteem issues, increasing knowledge, understanding and peer support.

We did this by providing a week long residential camp offering the provision of dance/drama workshops and establish parent support group. This also helped by offering respite for carers.

What COJAC Transition Project did

All staff and volunteers were existing. There were no recruitment costs. The carers and service users were existing service users with the funding used to enhance service delivery. Young people going through the adult transition pathway were provided with a Youth Group on a Monday evening from 6pm until 10 pm for 45 weeks of the year. This was supported by the Transition Co-Ordinator. This provided carers with a break on a Monday evening as the young people are collected from home and returned home after the activity.

A residential camp was provided for 9 children for five days. This took place in the Belmont Centre offering children tree climbing, flying fox, river detectives, night line and crate climbing. The funding from Better Breaks helped support the staff costs for this and provided carers with a five day four night break.

The specialised tutors assisted with drama and music workshops permitting the children and young people to express their feelings and views around transitions in their lives. We established a parent support group.

AB is 9 and has a diagnosis of Autism and ADHD. AB lives at home with his mum and because of his support needs he has been excluded from play opportunities in his family and local community. Providing AB with opportunities to take responsibility in helping others as he developed confidence and empathy towards others, this has reduced his eagerness to be in control and increased his friendships with others.

This resulted in AB developing strategies to deal with situations that have caused him stress in the past, and sometimes led to violent behaviour. AB can now identify when he is feeling uneasy and will ask for a book to focus his attention on or seek out tactile play which allows him to self manage his behaviour.
CJ is 8 years old, is part of the travelling community. CJ has Autism and attends an Autism unit in a mainstream school. CJ finds it hard processing information from the world and people around her and finds it difficult to retain and understand instructions and therefore spends most of her free time with her family.

The family worry when they are out as CJ will wander from them and will approach strangers. Her family are reluctant to access other environments such as soft play areas and parks in fear that CJ will be harmed as she has found it difficult to change in any routine and being separated from mum.
LG is 8 years old and has Autism. The family approached COJAC for support at a young age as he was not socialising with other children. LG was disruptive and easily persuaded by other children to act out and not participate with group games and activities, however recently has been working with the children and staff in group activities and this has helped him to develop friendships and establish best friends within the group.

LG has become more confident in verbalising his needs and has took a keen interest with sports projects and participates well in challenging games.

What COJAC CENTRE has learned

The fund has enabled us to offer extra respite to parents and carers, the challenge has been trying to meet the demand from parents for the service working within our ratios and giving 1:1 care when required.

More 1:1 meetings with parents we also learned visiting schools personally instead of sending registration forms has helped. Staff go along to parents information days and this enables staff to speak to new parents directly about our service and answer any questions.
Top tips COJAC CENTRE's top tips for an organisation that wants to run a similar project

That given the opportunity and funding you can make a difference to young people affected by disabilities.

Try and encourage parents/carers to be involved. They may be reluctant at first but we must keep encouraging them

Always be open to change if something isn't working then its okay to try something else and make new plans. 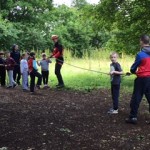