We provided a 2 week Summer Club, including transport and intensive staffing, for 14 children with complex support needs. One tailored week for older and one for younger pupils.

An activity and play based club for children unable to access community run schemes due to their high level care needs.

What Corseford School Summer Club 2017 did

Firstly, we ensured we could retain our Club Manager, who had moved to a full-time SLT support role. Luckily, the school is fully supportive of the benefits of the Summer Club, and allowed us to have Suzanne, and indeed funded her salary.

Once the Grant had been confirmed, we were able to offer places on the scheme. We invited all children at our special needs school (Corseford) to attend, and the uptake was 74%. While the club was based at the school, to take advantage of the facilities, this was not a "school club" and we aimed to get the young people out and about as much as possible.

The Summer Club ran for two weeks over the long summer break. One week was tailored for older pupils and the other week for the younger group. Days were from 10am to 4pm and transport was provided to enable attendance and to support the carers. The Club is play and activity-based. Activities included cooking, art, sport, music and outings such as Karting, speed-boat trips, kayaking, cinema, accessible parks, farms and other places of interest.

The students and carers were consulted before the club re suitable activities and feedback from previous years was also taken into consideration. Carers took the opportunity to recuperate after the long holiday, and to spend quality time with their other children and loved ones. Most took the opportunity to do things just not possible with their disabled child, be it a walk on the beach, or to climb a mountain. Some had a well-earned rest!

The young people who attend our Club have severe physical support needs. Typically, they cannot weight-bear, and require specialist supportive seating in their wheelchairs. Some have sensory impairments and other issues which mean that exciting and stimulating activities can be very difficult to access, and nigh on impossible as a group of friends together.

The Lochwinnoch speed boats are a perennial favourite, but this year the children were able to access the kayaks as well, a new experience for some which was a revelation for the children and their parents too!
Did you have enough daily feedback? Comments: 100% said yes, yes diary was excellent. Yes and the photos at the end of the week were fantastic, the daily diary and his switch gave us plenty of info plus we had the timetable so we know what was going on. The book of photos at the end of the week was lovely and demonstrated clearly just how much fun he had been having with his friends. A lovely keepsake and great for him to show other family members.

Were your child’s individual needs met? comments: 100% said yes, yes looked amazing fun! Yes staff always thought about x needs, yes no problems at all!
Yes absolutely! Absolutely. The Summer Club staff know him and he was fully involved prior to the club in choosing what he would like to do with his week

How did the summer club benefit you as a Parent/carer?
Comments: It allowed me to spend time with my other children doing things that we can’t do when K is there. It gave me a little break as there is nothing on during summer holidays. It’s great to know that R is properly enjoying himself with tailored entertainment. We used the time for trips we couldn’t manage easily, a lazy day on the beach etc. It allowed us to take part in activities with our other children that would not be suitable for L. Gave us a rest as much more to do when A is home.
Gave us time to spend with our son doing things. it allowed time for his little sister to enjoy activities that don’t always allow for wheelchairs. One to one time too!

We had a week to ourselves to get things done which had been neglected over the summer. We were able to spend some time together as a couple and have a rest too after 4 weeks of trying to keep him occupied. The taxi made a huge difference too as if there was no taxi the journey back and forward would have been prohibitive. Because he had a great and busy day our nights were better too as he slept a bit better (his sleep patterns are terrible). All in all so grateful for this week.

Gave mum some time to relax and time to herself, spent time with siblings. I had a really sore back so gave me a rest. I would not have been able to take my son out in the car or for trips as I could not drive. Less stressed knowing he was having a ball. It helped break up the holidays into manageable lengths.

Did the club benefit any siblings/family members? Comments: Yes we were able to spend time with L, went to cinema with brothers. Went out with brother who took friends too as room in the car and no need to worry about personal care stops or access. Mum had a rest. Yes little sister, yes my other son, yes our son could do things he normally wouldn’t be able to.

As usual we surveyed parents and the children before and after the Club, but each year we also survey the staff to ensure that they can contribute to its success, and get feedback. Some additional comments were, the summer club is always very enjoyable for pupils and staff alike. It is always very well organised. Suzanne runs the summer club like clockwork and the pupils love all the activities and outings she plans. Suzanne always puts all the pupils first with individual needs and they were all met with varied activities and resources to suit. Suzanne provided a well organised enjoyable fun filled summer club again!
Top tips Corseford School Parent Council's top tips for an organisation that wants to run a similar project

Get a good buy-in from your key support workers. They will make the Club a success since they know your children, and because they are there, the carers will be confident enough to entrust their children to you.

Keep it different! Our Club is run from school premises, but we are adamant that it should look and feel very different. Get out and about as much as possible - Lochwinnoch Water Sports is a good example of something our children rarely get to go, and is universally loved.

Get organised. As much information for your grant application to be gleaned from participants beforehand as possible, so this is easier, quicker and the Reporting also. How did you evaluate your project? We survey carers, the children, and the support workers before and after each Club to ascertain what they would like to do; and afterwards if they enjoyed it; whether anything could be done differently; if the transport makes a difference.

Our responses have been very encouraging. In addition, during the week carers receive a “diary” each day to show what the children have been up to, and at the end of the Club, each child has a set of photographs to remind them of their time, and to share with their family and friends. 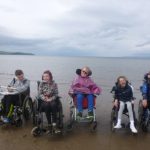