A story by Bodysurf Scotland

We provided weekly creative dance and movement sessions for young people with multiple support needs, whilst their parents or carers have time to themselves or to spend with other family members and friends.

What Dance and Movement Group did

We held 20 dance and movement sessions (including 2 taster sessions) between July 2015 and March 2016 for children with additional or multiple support needs. The young people were referred to us via the Highland Council who also supported the project by providing staffing in the form of a weekly volunteer and one additional member of support staff. The sessions took place at Nairn Community and Arts Centre for 90 minutes.

During the sessions the young people had the opportunity to explore creative movement and play through games, props and story telling. They were encouraged to interact with each other and the staff as much as possible and movement games were often used to support this. During the session the carers of the children did a variety of things. Some socialised with one and other over a coffee whilst others rested or spent time with their other children. The option of activity was entirely the carers decision and all were encouraged to make the most of their short break in which way they felt best supported their functionality as a carer.

A Christmas party was also scheduled for all of the children and their carers and families. This allowed an opportunity for the carers to come together as a community and interact with one and other.

Carer A’s older child attended the group in the first trial of classes. Now that child has grown up and left the group carer A’s youngest child has started the sessions. This allows the carer to spend time together with their older child and they have also noticed a positive impact in the younger child now that they can attend. The younger child’s attention and behaviour have improved dramatically since the sessions have begun along with their interpersonal skills.
Carer B has two children in the group. The oldest of which came to the group in the first trial of session and now has returned with their younger sibling. This allows carer B to rest and have personal time and time with other carers to gain support.
Child A was initially very tentative but has since grown in confidence and their carer has expressed that child A’s excitement is evident the day of the session.

Child A has also become much more aware of expected social behaviour and is working better with other children in each session.

What Bodysurf Scotland has learned

This fund has given us the opportunity to explore our work further into the social care sector. It has allowed us to make a difference to the local community and it’s young people along with their carers. We have also been able to extend our understanding of disability and how this fits into the dance industry. We have been able to provide dance opportunities to young people who may other wise not get the opportunity and for us this has been invaluable.

Throughout the project the registered dance and movement psychotherapist has been able to tailor the sessions to meet the specific needs of the young people. This has involved incorporating specific activities and equipment to suit the varying ability levels. Having the extra support from Highland Council has also meant that the sessions could be suited to the more introverted members of the group by allocating specific staff to specific children to give them the extra social support that they needed. This is something that we will build upon on in similar work in the future.

We have also learnt to allow the children to influence the groups activities. We used the impromptu games that the children would introduce to structure the movement sessions. This gave the young people some ownership of the sessions and also meant that they got more from the activities. We feel that we have really made an impact in the children’s and their carers lives and this has encouraged us to expand our work into the social care sector and provide similar experiences for other individuals with additional needs and their carers. We are now been able to continue the legacy of the group and will be continuing the sessions through support from the Highland Council and Self-Directed Support payments from the parents.
Top tips Bodysurf Scotland's top tips for an organisation that wants to run a similar project

Don’t be afraid to ask for additional support. We were able to provide such an amazing service due to the support from Shared Care Scotland Better Breaks Fund along side the support we attained from Highland Council and without this we would not have been able to offer such a valued service to the young people and such a positive break for their carers

Allow the agenda to change and develop. Feeling bound by your original intention may result in a lost experience. We allowed our sessions to morph as the children brought in new ideas for activities as this meant the service could be more tailored and involved each child’s imaginative thinking

Always have the carer in mind, although a project such as this one is tailored for the children it is the carer who will benefit from short breaks and therefore improves their ability to care for their child.

Making time a chat and being able to check in with the carers and see how they are can be invaluable to the service you provide. Also, allowing a relaxation time at the end of the session (especially if it is a physically active session) can help the hand over back to the carers be a much calmer transition for both the carers and the children 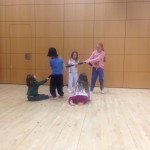