A story by The DASH Club

We provided regular weekly support for young adults with complex disabilities living in Glasgow, allowing them to access social spaces and to socialise.

By doing so we enhanced the young adults’ independence, provided additional breaks to careers and raised awareness about disability in general public.

What DASH Club Seniors did

We used our 2 existing staff providing them with extra hours for this program and recruited 8 new staff. All staff involved received additional Vulnerable Adult Protection Training and for all staff we carried out an additional PVG check enabling them to work with this a category of young people (18 +) vulnerable adults. In total 10 staff worked on this program in the last year, 2 Senior Program Officers (SPOs) and 8 Support Staff.

Overall we provided our service to 8 young adults within the period of the funding with 5 young adults forming a core group in the second half of the 5 months when the project was running. We provided 20 regular sessions (Tuesdays) for this group (end of October – end of March) for each session lasted 3 hours (7 pm – 10 pm). We therefore provided 174 breaks for 8 young adults.

We advertised widely through our network of partners and through our contacts within three schools for disabled children. We also directly approached parents of children that no longer attended our regular 11-18 years club. We provided support of the young people in 58 instances (on average 3 young adults per week attended) with 257 hours of work (79 instances @3h/worker) out of which 80 hours (20 instances) were for senior program officers and 177 hours (59 instances) were for support staff. That shows that each disabled individual was accompanied by a support worker at all times.

7 Carers received regular breaks mostly in the second half of the program when the core group of young people was formed (196 hours) and 4 carers received irregular or short term breaks (98 hours) throughout the program; overall 294 breaks for 11 carers.

The young adults visited a theatre show, various restaurants and pubs, Christmas Market and Merchant City German Market and their favourite place was regular visits to 10 pin bowling in a central bowling club in Glasgow. The carers spent their time with their other children, visiting family members and friends, going to gym and doing their hobbies such as reading, gardening and cycling.

KC enjoys the bowling session especially the evening that she was the winner amongst the group. At the end of evening session the winner got to choose a sweet or drink of their choice. She has never been in situation when she got an opportunity to be good at which would lead to a prize and she was so pleased with herself that the next time she went, it was obvious that she was trying very hard to be good and the healthy competition made her work very hard and experience excitement and sense of success, going over and beyond her thought capabilities.
LM lives with his Gran, he is a young energetic male which his Gran finds hard to cope with and to keep him stimulated. As a result he gets bored and gets into bad moods easy which adds to the stress of his Gran.

Attending these sessions gave his Gran extra respite to relax at home and on a few occasions it allowed her to go to bingo and enjoy a session with her friends in the evening. She felt more relaxed and energised and as a result she felt that she can spend more energy with LM who on the other side was less bored because he also had fun with his friends at our sessions.
All young people who attended had engaged well together and were very diplomatic when deciding the next week's activities. They allowed each other to have a say in what was going to be done the next week and they all made allowances and agreements to each others choices and/or preferences. As a result, everyone in the group got what they wanted to do eventually and the variety of things that had been done was also a result of each individual participant's voices.

What The DASH Club has learned

A project of this nature to be continued in the future in the same way would be too expensive for the young adults and their carers for it to become self-sustainable. The project would need continual support from funders.
Top tips The DASH Club's top tips for an organisation that wants to run a similar project

Client input was great as they decided on activities, which made the project driven by them, giving them certain control and independence 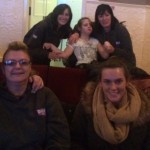