A story by DofE Scotland 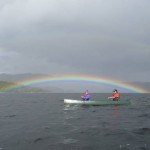 A team originally of 8 young people, but dropping to 7 got together to learn navigation, wild camp craft, (including outdoor cooking skills), videography and canoeing skills.  The events occurred in East Dunbartonshire, Glasgow, Ayrshire, Lochgoilhead and on Loch Goil and Loch Lomond.

The team canoed on open water, took part in self-rescue skills, (capsize drill) and camped on remote islands on the Loch.  In addition a water sports based residential opportunity for 10 young people lasting 5 days was provided in Lochgoilhead.  They then worked together to produce a video summary and have spoken at events to promote their activities.

We set out to provide social and practical canoe skills training opportunities to a range of young people from the South West of Scotland in order to help them gain their Duke of Edinburgh's Award Expedition or Residential sections.

In addition this provided day, evening and overnight respite to their families and carers in the knowledge that they were in a challenging but safe environment. The programme was later extended to include young people from Edinburgh and Perthshire

Set realistic goals - our 'social programme' was more for our (leaders) needs, rather than that of the young people, who were more focused on learning to canoe.

Have a detailed plan for the activities, but be prepared to be flexible

Communications with the families is essential, being able to respond quickly eased a lot of concerns
The groups socialised far better than even they expected, especially the young men realised that they needed to provide more support the members who had more profound physical disabilities. "It felt good helping those who needed more help than me, it wasn't about 1 person, it was about everyone and how they got around things" - Sam Daniel's (Expedition section?)
There were several discussions with the young people and their families, as for many they had not undertaken a full activity week before. It was clear that all the participants achieved far more than their parents and carers expected.

Feedback from a mother: Just a note to say thank you. Matthew has arrived home exhausted, smelly and full of his adventure! I don’t think he had a shower the whole 5 days!!! HaHa! He thoroughly enjoyed the experience and please pass on my thanks to all the carers/instructors who supported Matthew over the last 5 days, he has had an amazing time! He is so pleased with himself that he passed his Gold Residential, we are so proud of him too and we know he wouldn't have been able to achieve this without the support he was given.
Thanks again it was very much appreciated!
By allowing kinship carers the opportunity to take part in other activities with their families members, without the responsibilities proved to be invaluable, perhaps the only drawback was that some of them heard so much about the activities, they too wanted to come along and join in.

The families reported being able to take breaks, have lie-ins and to just have time to themselves, all of which were reported in a positive manner.

Robbie said 'It was great to hear that Kirsty met so many nice people and that she really enjoyed herself'
The staff at Lochgoilhead have never worked on such an intense programme with young people with a range of additional support needs. However they rose to the challenge and it demonstrated to them that they have the capacity and skill base to further support this kind of work in the future.

Feedback was given to 4 local authority providers to demonstrate that these activities can be supported with the minimum of change to existing programmes.

There have been discussions with over 7 other partners looking at improving or increasing their ASN provision. We further presented information on supporting young people in the outdoors to over 70 delegates at the DofE leaders conference, one of the most heavily booked workshops. We plan to run further training sessions on successful expeditions for young people with additional support needs in 2014 and beyond.
Whilst engaging in water based adventurous activities, the teams were supported to meet these new challenges and were happy to take part. The liaison with the families beforehand ensured that the families were happy with the programme.

There has also been lasting positive outcomes for some families, stating that they are amazed with the impact on their children, many stating that they have seen tangible changes in confidence and behaviours. One parent called to let us know that after the second weekend, her son came in and started a conversation and made a cup of tea, both of which he had never done before.
Personalisation is one of the DofE's guiding principles and both the Expedition and residential programme supported this. On the expedition, the young people chose more challenging options, including wild camping. On the residential , the group were involved in making the decisions on types of activity and also level of challenge.
There is no statutary requirement for these programme options, but many partners and providers have often found it either challanging or beyond their capacity to provide quality experiences for young people with additional support needs. This provision provided real added value for young people and parents/carers.
It is clear that this programme of activities has challenged this group more than any other previous activity. This is not just through the physical aspect of the activities but the necessity for the young people, many with complex social needs, to interact and support a wider team of young people.

Parent and carers have commented on the increase in confidence and positive interaction with others. Some of the participants are now supporting others in progressing through their DofE and other leisure activities.
The greatest challenge that we faced was on the social elements of the programme, as felt it would be great to get everyone together regularly on non- expedition activities. As the young people came from a variety of locations and we met infrequently, the initial meeting and engagement took a lot of time and cut into the planned activity time. However the team engaged well from the beginning and they were more focused on learning the skills

For the staff and volunteer team, working with so many young people with a varied range of needs proved challenging. Many of the young people came with supporters or buddies so there was a steep learning curve to ensure their needs were understood and met, thus ensuring that they got the maximum out of the experience.

The greatest impact was with the young people with aspergers and autism, who have been 'cared for' their whole lives, both in and out of school. It was explained that they were a team, so although their tasks were completed, they were expected to help others.

Once this was discussed and explained, the transformation was astounding. The young men were proactively watching out for their team mates and anticipating what assistance was needed. From day 3 onwards the input of the staff and volunteers was reduced significantly as they were functioning as a team.
We worked with our partner Local Authorities, who in turn reached out to Groups Leaders to gain a measure of need. From this the viability of the project was established.

However the duration of the programme, running days, evenings and weekends for 5 months meant that some families could not engage in the programme, primarily due to prior arrangements over the summer period.
Once a clear criteria was established the 'targeting' was undertaken by the partner local authorities, who recognised that they did not have the capacity to offer the opportunities. Many of the authorities had young people already waiting for this type of opportunity. Suitability was discussed with the DofE Operations Officer before any formal approach was made to young people and parents.

Some of the needs met included;
- 3 young women requiring assistance with dressing, limited personal care(non invasive), assistance with mobility into the canoes and across the beaches and around the campsites.
-5 young men who find social engagement, especially verbal communication challenging, so required constant support and encouragement.
- 2 young women with self esteem and confidence issues, based around their learning disabilities requiring support to engage in meals and the physical activities.
-3 young people required adaptive equipment to ensure their comfort and stability whilst completing the activities.
-7 young people have limited access to activities, either due to where they live or due to their personal financial and social circumstances.
The support from Shared Care Scotland has been excellent, especially when we had to establish Phase 2 to support the additional families. The flexibility and the ability to provide a dynamic programme was essential
One to one feedback with young people
Video interviews with young people, then creation of a project film
Discussions and review session with activity staff
Impact statements
Phone calls with parent and carers

Hours of short breaks respite that cared for people received