We provided grants directly to carers who care for an adult who has Down’s Syndrome who lives with them.

Carers were asked to complete an application form which asked for details of their caring role and any support they have, also details of their health and that of the individual they care for. Applicants were also asked to compete a questionnaire asking them to evaluate the impact of their caring role on their well being, their health, their work/education and their social life. It was asked what they would like to get out of a break.

The application form asked for details of the break the carer would like to take and in cases where the carer was not known to Down's Syndrome Scotland we asked for a referee whom the applicant knew in a professional capacity. Our decision-making grants panel consisted of 3 individuals - The Charity's Family Support Service Manager, a grand-parent member of our charity and a Chief Executive from another charity. The panel met 4 times to consider applications and award grants. In between panel meetings panel members considered applications via e-mail.

The Fund was launched at our Annual Conference in November 2014. The availability of the fund was highlighted in our monthly e-bulletins and on our website, as well as being publicised in social media i.e. Facebook and Twitter. Our staff attended Shared Care Scotland events and shared our application packs with carers networks and other charities. Application packs were available for download from our website or by calling our national Office.

Our team of Family Support Service Officers who operate across all 32 local authority areas of Scotland carried stocks of the application packs, handing these out to eligible carers and supporting their applications where required.

Mum and Dad of an adult male with Downs Syndrome were able to have a weekend together whilst their son attended a respite activity break. Mum said - 'The break was a detour from the daily routine and worry of taking care of my son. It was like re-booting my mind and body. My blood pressure measured normal after our break. The best bit of our break was having a world of 2 persons for just a while!.'

Mum and Dad had a break together whilst their son with Downs Syndrome was cared for by their daughter. Dad said 'We have increased confidence in leaving our son in the care of others. We are now more comfortable with the idea of planning future breaks. The best part of our break was "spontaneity" We hadn't realised we missed this until we were able to do things on the spur of the moment.'

Mum (who has severe arthritis) and Dad (who has difficulties with mobility) were able to enjoy a bus tour with their daughter who has Down Syndrome. Some of their friends also went on the tour. These friends helped with the care of their daughter and this enabled them to have sometime to themselves. 'We felt our batteries had been recharged and we were more relaxed. Our daughter was very happy chatting to everyone which made her relaxed too. It was simply great to enjoy a very peaceful weekend - meals getting made for you and not having to 'wash-up.'

Mum and Dad of 2 adults with Downs Syndrome who have had a very difficult year with a number of health issues were able to enjoy a family break in the Lake District. 'It was super in the Lake District and the weather wasn't bad either! After the horrendous year we have had with my Son, my daughter and myself all being in hospital, it was just what we needed. It was especially good for my husband who was able to unwind and enjoy himself without all the stresses he's been under travelling in and out to hospital to visit us.'
Dad who is a widower and sole carer for his son with Downs Syndrome used his grant to help fund the costs of a weekend trip to Benidorm for himself and his son. 'The grant gave us the opportunity to go to a destination we have never been to before and have our first holiday in 5 years. The break gave me the opportunity to enjoy leisure activities outside the home with my son. This break provided us with invaluable experiences and memories that will last.'

Dad traveled to support his son who was competing in the European Down's Syndrome Swimming Championships. Dad said 'It was a good chance to meet other carers and parents, and it provided a chance to see my son compete and develop independence and in relationships with other swimmers and team members.' His sons said ' Thank you very much for giving us the money to go on a special swimming trip. I won some rosettes and medals. I had a fun time because lots of friends were there and my dad cheered me on. It was a great weekend.'

Another Father who used his grant to travel with his son to the same swimming event said 'The break gave my son and I one to one time which allows us you totally focus and give your full attention to him. It's a safe environment so it's good to be able to take a step back and watch my son interact with his peers. The highlight of my break was watching my son do things other young men do and being independent and confident and not depending upon me.
Mum, who is a sole carer of an adult son with a dual diagnosis of Downs Syndrome and autism used her Creative Breaks grant to take a caravan break in Blackpool with her son and her nephew. Mum said 'Having the break with my nephew along was really good. James was able to take some of the pressure off me whilst I relaxed a bit as they are similar in age and have similar tastes.

Thank you very much for all you did for us, managing to get a grant was a total life saver for me. I was at my wits end when I contacted you and even as I spoke to you on the phone you gave me hope that something could be done to help. Telling me that your Family Support Service Officer could also support me was a big help. I have been in touch with her also so as a network you all offered help and support for all that I really thank you all.'

After running the fund for 3 years it is very clear that the majority of people who care for an adult with Down's Syndrome choose to take their break with the person thy care for. In many cases the carer has stated that it would be more stressful for them to arrange for someone else to care for their adult son or daughter and that in many cases they do not cope well with change.

Almost 50% of the carers who were granted breaks are sole carers. This has informed our Organisation further on the living arrangements and caring circumstances of this group.

In the last year many of the carers who were granted funding were unable to take the break originally planned and contacted our Organisation to discuss a change to the break. This has meant that in the past year we have had less formal panel meetings but have contacted the panel members more regularly to discuss changes and priorities. this has highlighted the need for the panel members to be able to be flexible.
Top tips Down's Syndrome Scotland's top tips for an organisation that wants to run a similar project

Where the carer is not known to your Organisation ask them to give details of a referee that they know in a professional capacity and to discuss their application with the referee. The referee can often provide the panel with further information which is significant in the prioritisation and consideration process.

If evaluation forms are not returned by post then a telephone call to the carer to discuss the evaluation. Ask a volunteer to telephone the carers and ask for their feedback from their break.

When selecting panel members consider whether they are able to make themselves available for quick consideration and feedback on high priority applications. This is also very helpful where a carer has to make a change to the planned break due to illness or other unforeseen circumstances and you want to seek approval of the change of break. 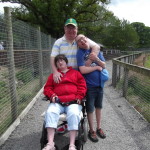