A story by Lothian Autistic Society

On every other Saturday the team gets together in Haddington for a fun day while their families can do other things without worrying about them.

Staff were recruited and trained during April/May 2018, prior to the first session for the beneficiaries on 19 May. Beneficiaries had been recruited through the Society’s Facebook page from families in East Lothian. The team has 13 members, aged between 6 and 16. The average age is 9.5 there are two girls in the group.

The team met every fortnight during school term for 6 hours, alternating sessions in Haddington with trips to a variety of cultural and leisure facilities including Dalkeith Country Park, Jupiter Artland, Bo’ness and Kinneil Railway, Falkirk Wheel, National Mining Museum and Museum of Flight. Sessions based in Haddington also included short trips to local resources such as Dunbar pool, local parks and shops etc. Each session included craft activities, sports and games as well as free time to relax. The relaxed atmosphere allowed natural friendships to form and grow.

The programme was structured to give children and young people with a range of conditions a real opportunity to grow and be more active, to explore new places and learn new skills. In each of these areas it has been very successful. Carers reported spending time doing shopping and meeting friends as well as spending time with other siblings and several expressed a high appreciation for this.

The major success is to have delivered an important service in a new location. It is heartening that several parents have described it as a ‘lifeline’ The original plan incorporated the Young Persons' Star as the principle monitoring method. It became clear almost as soon as the project started that the resources required for this would not be available.

The two principle assessors left the Society and it became clear that the cost of training additional assessors was prohibitive. Although we had used the approach in services during the previous six months, it was also clear that, although results were informative, the assessment activity was not sustainable.

What Lothian Autistic Society has learned

Our original plan was to use a commercially available Outcome Star to measure progress for children and young people across a range of domains relevant to their overall well being. A trial year with the methodology showed that its use in our services could not be sustained and we are looking at an alternative approach based on the Wellbeing indicators from Getting it Right for Every Child.

During the year we had additional resource through a student placement to gather information from families across East Lothian on what services they accessed and to identify significant areas of unmet need in the local authority area. As suggested earlier, this work has been extremely challenging. Despite initial agreement around focus groups, online surveys and other discussion forums, the number of families who finally engaged was very small. Many cited the dispersed geography as a reason for not attending group sessions (which led to a switch to telephone discussion with individuals), for many others we believe that time was too precious a resource for the families to devote much time to providing information beyond the specific s around the Saturday Adventure Team.

How Lothian Autistic Society has benefitted from the funding

The main benefit is the establishment of a new service in East Lothian that is highly valued by families and that has given the children and young people who attend new opportunities to grow and make friends. This helps with building the Society's reputation in the area and with local families. In addition we have increased awareness of what we can achieve with statutory agencies such as the local authority and local community health workers.

15 children and young people with autism will have enjoyed a programme of activities and outings that have stimulated them and had the opportunity to develop new friendships.

Over the past year 13 children and young people have been part of the Saturday Adventure Team. They have been engaged in a programme that has alternated activities and excursions much of which they have experienced for the first time. The programme, which will run until the end of the school year, has comprised 18 sessions to date, with a further three sessions planned. Children who completed an evaluation of the service all said that it made them feel happy or very happy, 75% said that they had made new friends. Comments around the best thing about the Team included ‘trips’, ‘soft play’ and that ‘it’s my favourite’. All parents who completed evaluation forms agreed or strongly agreed with the statements “My child had made new friends”, “My child has engaged in a new activity” and “My child has learned a new skill”.

V started attending Saturday Adventure Team there has been a massive difference in his confidence. When he first started, he was very withdrawn and he would often isolate himself. Through the more relaxed approach and 1:1 staffing started to make bonds with both staff and other children. He has now formed friendships and looks forward to coming to Saturday Adventure Team to see his friends. Saturday Adventure Team was able to provide an environment where he felt safe and allowed him to step out of his comfort zone. By him being able to do this he also used this skill while attending school and soon after he had made friends at school.

The families/carers of 15 children and young people with autism will have benefited from up to 144 hours break from caring, allowing them to spend time doing things with other family members or on their own.

Children and young people have been attending fortnightly sessions since May 2018. By the end of the school year there will have been 21 sessions, giving a total of 126 hours regular breaks from caring for the families. Families have informed us that they found this time very valuable. To know how happy and excited our son is to attend allows us to have a relaxed and fun-filled day with his brother who deserves this 1:1 time and it allows us to visit places we may not get to visit as a family due to A's sensory issues.” (mother of A, 6). “The opportunity to have time away and to catch up with friends or rest is extremely valuable and helps me a great deal. I would struggle to do without it to be honest.” (mother of C, 7) “It gives both of us time apart to do other things, for me as a single parent its my respite time. Its also gently breaking us in to being apart for a short time and building trust in people with my child” (mother of R, 11).

Points from interview with KM, mother of R (11), nobody to provide respite for her she is a single mother with no family, she found that friends became distant when R was unable to join in with the other children’s games, she finds it scary that she hasn’t got anyone to care for him if she needed to go away, perhaps someone from school could care for him as they know him very well but this would likely only be for a few hours. Saturday Adventure Team gives her a break from the full-time care and allows her to catch up on things that she needs to do, its gives R play and fun and practice of being away from his mum and she finds the alternate day in/day out very beneficial as it gives R new experiences and maintains his attention and desire to attend.

We will use the Triangle Consulting Outcome Star to measure changes across key areas of the child/young person’s life through the programme which can them be shared with their family/carers.

Although we were unable to incorporate the outcome stars in evaluations, we have assessed progress across a number of areas through structured evaluations from both the children and young people attending and from their parents/carers. The table indicates scores from evaluations at two times during the project from parents/carers. Some positive feedback, my child has made new friends, my child has engaged in a new activity, my child has learned a new skill.

J has started Saturday Adventure Team she has become so open to trying new activities. When she first started her Mother had said she was very apprehensive about new activities and different environments. However Saturday Adventure Team runs having 1 in house week and 1 trip week within the month allowed J to experience new things. She was able to do this through a structured day and with the 1:1 support. Her Mother was given a detailed plan for each day a week in advance she able to use this to prepare her.

Many of the participants will be able to demonstrate progress in wellbeing and other indicators in their Triangle Consulting Outcome Star. 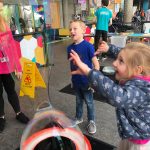