A story by Lanarkshire Epilepsy

We organised a weekend break for families living with Epilepsy at an outdoor centre where they met and shared experiences with others in similar situations while enjoying new challenges.

What Family Activity Weekend did

We organised a Family Activity Weekend for families already known to us who are living with epilepsy. We had arranged similar weekends in the past, both in partnership with Epilepsy Connections at Ardentinny Outdoor Centre and, as in this case, on our own, at Galloway Activity Centre. We consulted with the families we invited about both the practical arrangements and the programme for the weekend, but we knew from experience that the real benefit for carers and children would be the opportunity to meet and spend time with others who shared similar experiences. We also knew that the staff of the Centre could be relied upon to provide a programme of activities structured according to the abilities of the participants.
The recruitment of suitable families proved more difficult than it has in the past. The event had been postponed several times due to COVID and we were, in fact the first visitors to stay overnight at the Centre since the lockdown. Some carers expressed concerns about mixing with others at relatively close quarters. We had planned for the participation of the Project Coordinator, two volunteers, eight carers and eight children, totalling nineteen individuals. In fact the complement was thirteen, comprising five carers, two of whom were also volunteers who had undertaken activity leadership training and eight children. A family of five withdrew on the day of departure, due to a health problem.
As there were some savings on the original cost estimate we were also able to arrange a follow-up one day event for five carers and two volunteers at the same venue.

What Lanarkshire Epilepsy has learned

• Although the intensity of a residential experience brings significant benefits, a programme of one day events spread over a longer period may be more successful in engaging with carers and increasing the overall benefit.
• Recruitment of families has proved more difficult, after COVID than it has in the past. Outreach was hindered by the lack of face-to-face contact during the months leading up to the weekend and it was difficult to build the confidence that families required to make such a big commitment.
• Minibus and driver hire proved prohibitively expensive and in the event families travelled in their own cars. The reimbursement of fuel costs was much cheaper than minibus hire would have been.

How Lanarkshire Epilepsy has benefitted from the funding

Better Breaks has enabled us to maintain a sharp focus on the changing needs of the families we support. Although the residential weekend is a tried and tested format that gives carers an opportunity for a really significant engagement with others facing similar issues, it has become difficult to implement in this post-COVID environment. Challenging outdoor activities, however, have been shown to be an extremely useful vehicle for helping carers and children to develop greater confidence and self-esteem. The partnership with Galloway Activity Centre and the benefit of the skills and experience of the instructors, there has proved very beneficial and we will seek to continue it.

Eight young people living with epilepsy, either because they have the condition, themselves, or are living with other family members who have it, feel more confident about the chances of living happy and fulfilled lives, in the future

As it was only possible to implement the project in September 2021, a twelve month assessment of results is not possible. The eight young people who attended took part in climbing, zipline, giant swing, water park, water slide, laser quest, archery, kayaking and paddle boarding. Their enjoyment of these activities, relationship building and burgeoning self-confidence was clear to see.

The Smith family; Mum, Dad and two of their children came on the family activity weekend. All the family’s lives are affected by the epilepsy that Henry, their 6yr old son has and much thought has to be taken when deciding what they can be involved in as he can suddenly have a seizure without any warning. Mum, Jane shared the shock and concerns they felt when their son was diagnosed and the difficulties they have to live through particularly as he is now at school. He is sometimes very upset as he is often secluded from participating in school activities so coming with us was an exciting adventure and watching Henry join all the other children in the activities and challenges and having great fun made everyone so grateful for the funding for the weekend and Mum said; ‘ Spending time with other families going through similar things is so valuable’

It is a principle of our project that carers, as well as children, are encouraged to participate in the activities provided. These often provide new experiences for them and their aspirations and expectations of life are likely to be expanded as a result.

The five carers who took part in the weekend experienced the full range of challenging activities that were provided and although two of them were also volunteers, the magnificent staff of the Centre completely took over the support of the young people through the programme allowing the carers to enjoy the experience in their own right.

The Brown family were so looking forward to coming to the activity weekend and felt surprised to receive the invitation as they thought it would only be for families who had children with epilepsy and it’s John, the father of their family who has epilepsy. Epilepsy affects all family members and having a conversation alone with the children at the event, Julie the 8yr old daughter of the family openly revealed her fears and concerns and how she knows when her Dad is just about to have a seizure. She shared that she knows what to do and who to call if she is alone with her Dad and had a particular close conversation with another child, who’s brother has epilepsy, these two young carers very much enjoyed each others company. The family had so much fun and, again, were particularly grateful for the opportunity to spend time and share their feelings and experiences with others who had understanding.

Carers will have a wider circle of friends and acquaintances who understand their situation and will be less isolated as a result. They will be in regular contact, sharing their concerns and will also be ready to pursue hobbies and social activities out with the family home.

Although face-to-face support group meetings have been suspended for almost two years informal small group meetings via local hubs are being gradually reintroduced. The carers who took part in the weekend are already members of the charity’s closed Facebook group, wherein they can share concerns and experiences with others in similar situations. The charity is also offering them opportunities for further involvement as volunteers and as members of the Management Committee.

Liz Brown, the wife of John and Mother of Julie (above) had not joined the charity, or its Facebook Group, prior to the Activity Weekend, but had been recommended to the Project Team, by a friend, who was already involved. She and her children greatly enjoyed the weekend and the chance to talk to others about the challenges of living with epilepsy. In the weeks since the Family Weekend, she has been actively contributing to support Group meetings on Zoom and posting on the closed Facebook Group. She has started getting to know others who are living with the same challenges and has a lot to both give to them and gain from them. She has expressed an interest in volunteering with the Charity and is considering an invitation to stand for election to its Management Committee. 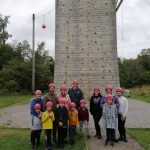