A story by Team United

What GAME ON did

Football sessions for all abilities to children and young people aged 8 to 16 with Autism. The sessions run during school holiday periods - Summer, Autumn, Christmas, and February, with 25 places available each day at each location.
Carers are able to have a break from their caring role.
We worked in partnership with local community groups in order to share facilities, programmes and venues which helped reduced some costs but also introduced carers to other opportunities in their community.
The project resulted in the organisation being able to identify children who could transition to our other services. Children who had been difficult to reach before.

What Team United has learned

There is a high percentage of children with a disability that attend mainstream school and are not offered provision during the school holiday periods. The opportunities are mostly suited to those without additional support needs.
By offering and promoting our project in a different way, has allowed us to reach children who would otherwise not have benefited and for carers who would not have had a break from their caring role. Additionally, carers who had a chance to make friendships themselves.
The project allowed us to develop new partnerships, in particular in areas where we had not delivered before but were aware of the need. This has resulted in further discussion on more regular activities being on offer, increasing the capacity and knowledge locally. The project has allowed us to evidence the need for increased provision on a more regular basis.
Local authority Summer of Play funding was offered last year but this was late and we had already accepted our grant and made plans. We hope that this will be offered again and if so, this will enable us to attract matched funding and increase our activities.

How Team United has benefitted from the funding

Team United has linked with new club partnerships which has resulted in more formal structures being in put in place. We appreciate that for sustainability reasons this is important and the more groups that we learn from us means the more disabled children can attend and carers benefit from a break. We are currently exploring new areas and developing new partnerships with Community foundations attached to clubs as they also have a defined purpose to serve that community. This extends to Angus. Better Breaks funding is key to the success of providing disabled children and their families the break they need and the enjoyment experienced from making friends, taking part and knowing there is a transition at the end for them.

All of the children and young people that attended the provision were able to participate fully in adapted sessions to meet their needs. We hit some restrictions that were still in place and therefore had to change our approach to where the social outing took place. The numbers of those attending also had to be reduced but we did more fun activities and talked more about social communication amongst the group to give a similar experience. We exceeded our target of 15 young people and this doubled in some areas. This was due to the lack of provision for this client group in the areas identified.

Child A had been in long term care and recently placed in foster care. His foster carers were keen for him to participate in our activity during the October school holiday break and as this was for a shorter time and over 4 days, this suited the child better. The family were able to access an activity close by so it worked well. Child A did display some challenging behaviour but integrated well over the 4 days. We were able to identify that he needed more time to process instructions, to understand rules more and the impact and consequences of behaviour. To overcome this, we sent him away each day with small tasks to complete which reduced his desire to compete and reduce anxieties. Child A registered for our new service in the rea in January this year, having built up his confidence and is now a popular member of the Fife team. His foster carers now have a longer break and rely on other family members picking him up.

Carers will report an increase in their own well-being having had more time to spend doing activities they enjoy and are beneficial to them. We gathered case studies from carers to influence the planning and design of future sessions.

The evaluation from carers proved to be a focus for our funding submission for the 2022 Better Breaks fund. Some carers, particular new carers of younger children involved in registering for sessions were still reluctant to go far from where their child was taking part in sessions. They too wanted us to consider the venue for future sessions and closer to ac tivities they may enjoy so if they were needed to be contacted, they were close by. In recognising this, we developed a new partnership with Bonnyrigg Rose Community Club. The Club were keen for us to make use of their new facilities that will be completed early in 2022 which also included a Cafe. They had planned for some yoga and relaxation classes and were happy to consider putting these classes on when carers attended our sessions.

Blair is 9 years old. His parents both attended every session on the first two days of the activities. Such as their concern over Blair's lack of interaction with others and outbursts, they stayed and did not benefit from the purpose of taking a break from their caring role. However, on day 3 of the activity, our staff spoke to them to give assurance of the support we were offering and asked them to even go to a nearby Cafe to have some time away. As this was successful, the next 2 activities Blair attended, they were able to drop him off and return at the end having had some time away. Blair's parents were thankful and confident that if they register him for activities again, they will both not have to come and will plan an activity to they can take advantage of all the project has to offer. Since then, Blair has travelled to our Fife session and become an important part of the team. He has learnt to manage his temper and to ask for help. He knows the structure and is more confident.

Carers report having regular and consistent break from caring. Listening to carers and ensuring their voice is heard in the future design and development of activities Good representation of carers involved in forum across key areas Annual survey measures impact of holiday provision wellbeing

The demand for our provision always goes beyond the targets that we set but this year, we delivered activities in new areas where we tested new partnerships and venues. We reached new carers of disabled children, many who had not been able to access services before and were less confident of leaving their child. Carers were also quite reluctant to form a new forum and told us that they did not have time to do so. We took this on board and instead of developing a forum in person, we have a closed Facebook page where we allow Carers to talk to each other and we manage a Whatsapp group and online discussion when preparing new projects or in preparation for the 2022 funding so we are representative of their views and choices. One parent has come forward to help with measuring the impact of carers and we hoe to be able to produce this in document form when our annual report is due with OSCR.

Mr Knox is a single parent who was also isolated from his own peer group and often struggled with his own mental health. He had tried to reach out to groups before and find something for his son, Anton that would give him a break and sufficient time to seek out some clubs he might enjoy. This had not worked out well for Mr Knox but he did register Anton for our February school holiday provision but was not confident that his son had the ability and attitude to fit in with others. Mr Knox had a particular problem with disability provision and had only tried clubs and groups for Anton from mainstream providers. Mr Knox said that finding Team United was like a 'Blessing from God' Anton didnt want to come home each day. He slept better which was a huge problem at home before. But, importantly, Me Knox found a carer he had much in common with. After attending weekly activities with Team United, both carers have gone fishing together over a weekend and both children have been taken care of by family members, giving them a much well earned break but friendship.

Carers and young people feel the benefit from their participation in the project in terms of their health, well-being 80% of young people report being more active 70% carers report an increased improvement in their well-being

Participation from young people who attended our school holiday provision have mostly transitioned to weekly sessions at Team United. The project has had an impact on the organisation and being able to reach more young people and raising awareness to carers, particularly in new areas and partners where we had not delivered before. This also resulted in the organisation developing new partnerships with groups - in Fife we now have 2 groups which were not there before this project was run in 2021. From the evaluation carried out, our targets have been met if not exceeded. A small number of carers are still reluctant to leave their child for the duration but we have now developed specific activities for carers close-by which allows them to chat together, share information and form friendships themselves.

Bonnyrigg Rose Community Football Club had previously worked with us and allowed us to use their facilities for providing sessions. As their community outreach work had grown significantly, opportunities to work together and offer carers a better break was aparent. Carol L had always had difficulties with anxiety in her own life and really struggled to cope during school holiday periods, finding activities for Ben that would allow her some time on her own. Carol was able to access some of the relaxation classes that Bonnyrigg Rose CFC put on when Team United sessions were running and this allowed her to talk to other people and this helped her reduce her anxieties. Since this time, Carol L has continued to access classes when Ben is at school and benefited from counselling services. 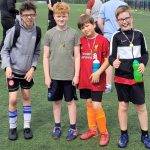