A story by Thera (Scotland)

Gig Buddies enabled adults with a learning disability to get out to gigs and events they love by paring them with a volunteer who shares the same interests.

We also run regular social events for our members to expand their social networks and discover events in their local area.

What Gig Buddies Lothians did

Securing this funding enabled us to run Gig Buddies in Scotland for it’s 4th year. We entered this period having 3 years previous experience running the project, but still having many things that we knew needed to be developed or improved upon. Soon after being awarded this funding, one of the first things that underwent a major reviews was to make dramatic changes to our volunteer recruitment process.

We drastically streamlined and simplified the process, making it easier for volunteers to apply and join the project. From October 2018 to October 2019 we successfully recruited, trained, and paired 19 new Gig Buddies volunteers. 16 of these pairings were in the Edinburgh and Midlothian areas, with 10 of these pairings being with members who have never had a Gig Buddy before. This enabled many carers to have a short break every month while the person they support developed their social networks.

At the time of application, our target for our social events was to run 8 socials in each location we work in across 12 months. From October 2018 - October 2019 we far exceeded this target by hosting 58 events for our members across Edinburgh, Midlothian, and West Lothian. 37 of these events were in Edinburgh/Midlothian and 21 were held in West Lothian. This is due to a great response from our members towards group events. A highlight of our socials in 2019 was the 20 hour fringe marathon we called 'Fringing 9-5', where we enabled 10 members to get out to the Edinburgh Fringe Festival from 9am - 5am.

Joseph joined the project in January 2019, and has since been to a wide variety of social events. He says 'Gig Buddies has helped me get out more. Coming along to socials has made me more confident and more independent, it's even encouraged me to start a college course. I've made some good friends, I really love it.'

What Thera (Scotland) has learned

During the course of this project we have further developed many relationships and partnerships with local, and national, festivals and organisations. Our relationship with the Edinburgh Fringe Festival reached new heights, and one of the highlights of our year was hosting 'Fringing 9-5', a 20 hour fringe marathon which saw 16 gig buddies get out to the festival from 9am - 5am the following morning.

We continued our partnership with Edinburgh venue, St Cecilia's Music Hall, and are working with our team of project Ambassadors to create a video for the venue on 'How To Access St Cecilia's'. This will then be permanently on the access page of the venues website.

We also started a new relationship with the Royal Scottish National Orchestra (RSNO) and have been working with them on enabling people with a learning disability to access RSNO concerts in Glasgow and Edinburgh. We are also looking to produce an access film with them similar to the work we have done with St Cecilia's Music Hall.

We have learnt a lot about how our members best respond to our social events and what type of events prove popular with our member base. We have found that events with limited spaces are better attended than open invitation events. We have continued to run our 'MEAT UP' events, which see members regularly meeting in local pubs to get to know each other over a bite to eat. These have proved extremely popular and are a great way for members to meet new people in a casual setting. One member says 'I like coming to MEAT UP. It's a great atmosphere getting together. Getting to know new people is fun, it's really fantastic!'.

We've also learned a lot about how best to budget our project and what to prioritise. We have found that although we encourage volunteers to claim expenses, the vast majority of people still don't wish to do so, saying they would rather we focused the money in other areas. We are now looking at how we can best translate this over to our budget that still means we can be flexible with volunteers and gives them the option to claim when they want to.

How Thera (Scotland) has benefitted from the funding

Over the past 12 months, we have benefited from Creative Breaks funding in a number of ways. Firstly, this has helped us strengthen our reputation as an exciting, unique, and innovative project for adults with a learning disability, providing opportunities to people that no other organisation is offering in our area. We have also strengthened links with other organisations, notably local venues and festivals. In 2019 we further developed our relationship with national music celebration, Independent Venue Week (IVW), which in turn led to us partnering with 'Sneaky Pete's', a local music venue, to encourage our members to access their venue. In January 2019 we teamed up with IVW and Sneaky Pete's to invite our members to attend 5 gigs in 5 nights, this was a great success and Sneaky Pete's has since become a regular venue for socials. We also greatly strengthened our relationship with the Edinburgh Festival Fringe, and as one of their 'Fringe Days Out' partners we gave away over £1400 of tickets to our members to access this years festival. This funding has also allowed us to hire a part time coordinator for our West Lothian project as of August 2019. This greatly improved our capacity to work in both West Lothian and Edinburgh and has been a great benefit to the project.

Carers have spoken to us about how Gig Buddies has given them extra breaks to spend time to themselves, due to the cared for person being out with their personal Gig Buddy. Others have spoken about how they have bought the person they care for along to a social, and have then spent time catching up with other parents and carers will the cared for people socialise. Other carers have noted that they also enjoy the socials we put on saying 'we would never have found out about this venue if it wasn't for Gig Buddies. We will definitely be coming back'.

Christine is a parent and primary carer, her daughter is a Gig Buddies member and has a one to one volunteer relationship. With her daughter able to get out regularly without her support, the project has had a strong positive effect on Christine's time. She says 'I value a space in a busy life where I am not unpredictably "on call" as a carer for pretty intensive emotional and practical support.' As well as giving Christine a break from being a primary carer, Gig Buddies has helped Christine spend some time to herself; 'This last while has been so full on, for all sorts of reasons, mostly I use the time just to relax and catch up with myself, read a book, listen to music, or a mixture of all three! Sometime it just feels like bliss to just be on my own and in control of my own time.' Christine also comments on the impact the project has on her daughter and how this effects her; 'Seeing my daughter so happy when she come home from a Gig Buddies event is also a treat! I am very grateful'.

The supported people accessing the project will have access to a wider social network. Our members will regularly attend our socials. They will be able to put forward their ideas and wishes for future events through ongoing supervisions and members meetings.

Richard is 25, he is a Gig Buddies member and lives on his own. Richard has social anxiety and feels that this has been a barrier in him having the social life he wants. He says, 'With having anxiety I don't really like going to clubs or music venues on my own, especially late at night. Going with other people through Gig Buddies feels much safer. It's good to have a laugh with friends'. He has been regularly attending Gig Buddies socials and feel that their has been a dramatic change in his life. 'Before I joined Gig Buddies I didn't really have anything to do, and didn't have much in the way of friends. Going along to the socials and being able to make new friends has given me a lot more confidence in talking to new people'. Richard also has a one to one Gig Buddies volunteer, which he feels has also helped boost his social confidence. 'My buddy, Aaron, is a really awesome guy. Although it's great to do to group activities, it's good to have my own volunteer to get out with when we're both free. We don't have to just go to Gig Buddies events, we can do what we want. I've even met some of Aaron's friends, they're really down to earth people. I think my confidence has grown through meeting them. I feel really comfortable meeting new people now, something I was always nervous about before joining Gig Buddies'. 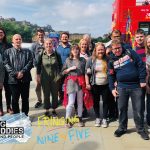