A story by Glasgow Disabled Scouts

We believe everyone is entitled to adventure! Through this project we were able to support 20 young adults with disabilities to attend a week long adventure camp near Stirling.

We provided one to one support through a team of 30 volunteers which allowed the young adults to participate in a wide range of activities as well as having time to socialise with their friends.

The focus for this project was a week long adventure camp in July. However preparation for the camp began many months before in recruiting additional volunteers and completing additional training with our current volunteer team so they could fully support the needs of each young adult attending. This included safeguarding updates, first aid training, Makaton training and qualifications for some of our senior volunteers in emergency epilepsy management.

The participants themselves also spent several weeks preparing for the camp, learning key skills and participating in planning sessions so they could co-produce the programme to ensure it was relevant and interesting for them.

At the camp itself 20 young adults spent a week camping (in tents!) in a field outside Stirling. The whole camp was self-contained - we cooked in a tent, provided personal care from a tent and, being Scotland, wet weather activities in a tent!

Each day the participants completed a Camp Log which included their own reflections on the day and what they had achieved. These are available on our website. Activities completed included rock climbing, abseiling, swimming, a day hike along the canal from the Kelpies, raft building and numerous campfires!

At the end of the camp we reflected on the impact the week had on the participants and on their carers. We heard feedback that the week provided respite which would otherwise not be possible, and in several instances an opportunity for the family to focus some time on other siblings. We know that as a result of attending camp the participants gained confidence, self-esteem and increased their independence. They learned skills and made friends, and for us, most importantly, they had fun!

One of the participants, Ryan, had never been away from home before and had never been cared for by anyone other than his parents. Deciding to come to camp was, in itself, a huge step forward. However he threw himself into every activity, refusing to give up when he couldn't quite manage something and building on the strengths of the other Scouts in his Patrol.

He initially refused to try rock climbing - judging it to be impossible for him, as someone with cerebral palsy. Eventually he not only tried it but reached the top - and started again. He immediately recognised his confidence had increased and his sense of self-belief with it.

His mum reflected after camp that "a different boy has come back - he's willing to try things, and he's willing to go places without me". For Ryan's mum this not only meant her son had gained much needed independence, but that she had more time to spend on her other children and looking after her own wellbeing.
Steven has a complex range of care needs which means that for most of his life he has been reliant on a team of round the clock carers. Whilst he is encouraged to take part in activities, often the activity was done for him by those around him. We take a strengths based approach to all activities - identifying and building on what they can do rather than focusing on what they need help with.

We let Scouts try things, and try again, helping them where necessary but never doing things for them. For Steven this meant he was encouraged to do as much of his personal care himself - we discovered he was able to control some of his teeth brushing for himself so we built on that and let him do as much as possible for himself.

This was a revelation to his dad who had no idea he was able to do this. Steven was obviously pleased that he could demonstrate his own abilities.
Each day at camp the participants spent some time in their Patrols (small groups of Scouts) reflecting on the day and what they had achieved. This is important both so that the young people identify their own achievements and so that they reflect on things they did that perhaps at the time they didn't think were very major achievements.

We published each of the logs on our website and shared these via social media so that others could see what is possible in the outdoors. We hope to do more with these through a short film and a presentation to other organisations on potential uses for our outdoor centre by other disability organisations.

What Glasgow Disabled Scouts has learned

Our work is predominately focused on young people aged under 18, so this project was a departure from our usual work. We knew our model of support and activities would work with an older age group but this project has allowed us to prove that not only are these activities suitable, but that this is an age group for which many other social activities are simply not available. 85% of those who participated reported being involved in no other social activity apart from Scouts.

This has meant we have further developed our work with the older age group for future projects. We found it more challenging than we expected to recruit new volunteers to support the project, and we have carried out a review of our recruitment processes so that we can try and link into more opportunities in the future.
Top tips Glasgow Disabled Scouts's top tips for an organisation that wants to run a similar project

We always start from the perspective that the activities we want to do are possible for all our young people then we work out how we adapt them. If you start from the assumption they 'can't' do something then you'll be proved right!

We plan every second of our day at camp and even then we reflect on areas where we could have planned more. A key for us is actually visiting every activity before the camp itself - never assuming that the availability of a disabled toilet means it will be suitable, or that door widths will be adequate.

Focus on fun as much as care.

We provide one to one support based on individual support plans to meet each of their needs. However we put equal amounts of effort into our programme of activities so that our focus is both on meeting the care needs to a high standard and making sure the young people have fun. It's amazing how low down a list of priorities fun, friendship and adventure usually appears! 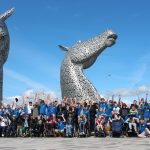