A story by SupERkids

SupERkids provided activities including drama, dance, music and film in East Renfrewshire, where kids with multiple support needs can develop self confidence, express themselves and have fun.

The clubs allow the kids to have independent fun while their carers and siblings have a break from caring.

What Glee, Wee Glee and Film Clubs did

The Better Breaks funded SupERkids programme has enabled the Glee and Wee Glee Clubs in East Renfrewshire. The young people with support needs who benefited from these clubs were invited to attend through emails and fliers sent out to their carers. Glee ran from September 2019 to March 2020 and culminated in a production of Snow White and Friends.

The most important objective of Glee is inclusion and all young people were involved. Each kid, irrespective if they were verbal or non verbal had lines to say with AAC devices liked to the sound system. We used an inclusive drama group DASE (Dance Act Sing Enjoy) and each Saturday the club ran for 2 hours.

Wee Glee ran on a Monday evening from 6 to 8.30 pm from September 2019 to March 2020 which included Music Club and worked well for young people aged from 5 to 16. Wee Glee would have culminated in a sharing event on 30th March 2020 but this was cancelled due to Coronavirus, but the video of their performances each week was shared to all families in March. Paragon, an inclusive music and dance group ran the fun and exciting weekly sessions.

Older teenagers (many more capable) proved less likely to attend Glee and Wee Glee but are keen to be involved in a drama based event. The Film Club ran was a murder mystery (Hayes House) and the kids acted their part from the script they wrote. The clubs directly address the issues of independence and the complex needs of the kids.

SupERkids is a carer led charity and the project went to plan and was successful in reaching a broad age range of kids who cannot go anywhere else due to their high level of care need. Most of the kids attending clubs have less developed social skills and it gave them a weekend activity where they can see and make friends. The friendships here have lasted and is a huge thing to them and their families.

What SupERkids has learned

There remains no substitute for detailed financial planning and routine financial monitoring in the delivery of outcomes we seek. Knowing where we are and were we're going prompts us to make decisions and take action, which at all times is child and beneficiary centric. The challenge we faced during the year was that the Glee Club format was less popular than planned and provided us with the opportunity to provide new activities and reach new beneficiaries which we did.

It's not doing historical activities that is important, it's doing the activities the young people want and meeting the outcomes we achieve and giving our beneficiaries the value intended. More variety of activities is something we have learned has value within certain categories of beneficiaries.

How SupERkids has benefitted from the funding

Better Breaks seed funding provides a showcase of activities which attracts other funders and public donations. Through seeing the activities which have been funded by Better Breaks, the value of the outcomes experienced by our young people and beneficiaries, is clearly visible to others who identify with our values and outcomes and contribute to the overall delivery.

Young people will have increased confidence and independence and social interaction from the continued attendance at the Glee Clubs.

The difference in the young people from start to the end of the clubs has been apparent for everyone to see. The routine of the clubs helps the young people and there was a high level of attendance from all the clubs that ran over the 7 months on a weekly basis. The clubs are only not on if we could not gain access to the theatre at Mearns Castle High School and the Mod at Isobel Mair School. A group of up to 25 young people aged 10 and over attended Glee and their performance at Snow White was full of confidence and accomplishment. The project ran for 23 Glee and 23 Wee Glee clubs as well as a 10 week film club. This year Wee Glee was split into 2 age groups, now for 5-11 years and one for 12 and over. The older age group, Music Club was for the young people who had grown up with Wee Glee but who were not interested in the drama based Glee Club. This ran from 7-8.30 pm and 12 young people attended with more complex needs. Wee Glee ran from 6-7 pm with 18 kids attending.

Having a child with multiple support needs has a marked impact on the family unit and when you care for your SupERkid 24/7, the impact of having 1 or 2 hours without the stress is immeasurable. Each parent who runs SupERkids is in the same situation, that is why we understand the impact on families. One parent whose child attends Wee Glee said that it was the first club/activities he had ever attended where she did not have to stay and it gave them confidence. Their son has huge separation anxiety and going to Wee Glee had helped his independence and confidence levels. She stated that "he is well supported and encouraged to express himself and participate alongside his peers developing his communication skills. We have experienced barriers to mainstream activities and the inclusive approach at Wee Glee encourages us to advocate fully for him. His differences are very apparent at mainstream but at Wee Glee this is not the case and he is accepted."

The provision of over 7,500 hours of respite to parents, carers and siblings.

We monitor the number of kids attending clubs and project the number of carers receiving respite based on the kids who attend. Through consultations, carers were asked if they would prefer more clubs rather than the show and all replied that the show was a significant support. SupERkids provided 6,972 hours of respite up until the clubs were cancelled due to Coronavirus. This year Glee had 22 kids in the show rather than 28, as the older kids moved onto the Magic of Showbusiness group ran by a former Glee Club attendee. We surveyed families and identified that weekend clubs were beneficial. A pilot of Saturday Club was set up for kids with complex needs. This was set up after Glee in the same facility and each week was themed. We also identified that younger boys with support needs were more interested in games than drama so we ran a Minecraft Club which was well attended & enjoyed. It is hoped that we can continue these activities to allow kids to be in control of their enjoyment.

The Glee performance has a positive impact on so many young people who attend. The young person in the lead role this year was so excited to be Snow White and had a huge input into the songs that were sung. She chose one song - Counting Stars by One Republic as she said that all of them in the Glee Club were stars. She was full of confidence and happiness on stage and it was amazing to watch this young woman, who can be very anxious, stand up and give a remarkable performance. A family whose young person with multiple support needs attended the pilot of Saturday club was delighted at a weekend club ran for the specific needs of their son, who was happy to get out of his wheelchair to become involved in the activities. The son has now also signed up for another SupERkids club and the family are so pleased that he is supported to have fun and that they can leave him for a short while.

Positive feedback from carers especially those in greatest need, similar to those received in the past where carers have been able to undertake activities that cannot be done with their SupERkid.

During the project, evaluation methods were used including surveys, meetings and events to gain feedback from carers and young people. One single parent said that her son loves Music Club where he plays electronic guitar, drums and keyboard and helps him to socialise with other children as he is an only child, and it helped him not to be isolated with her at home. She said that she had recently set up her own business and that this time allowed her to work while he was at the club. Another parent said that her young person enjoyed "her club" as she is very sociable and loves to perform and practice and make up stories and music with Paragon staff. She said that her daughter loves the club and looks forward to Mondays and she gets to spend one to one time with her old sibling. She said that her daughter "loves her special club away from family"

One single parent carer said that "Glee had opened doors for us as a family" as her child is "able to spend time away from me at weekend doing activities he has never done before" and "for the first time in his life I have a few hours to myself at the weekend and being able to meet friends for a cuppa is something people take for granted" Her son asks "if Glee is on at the weekend and going from a child who could not be in the same room asking about doing something that doesn't involve me is wonderful and a day I thought I would never see."

The wider community and friends and family will be the young person with multiple support needs achieving through their performance and will see them become more confident.

Carers see from their attendance at the clubs that they have social skills and have fun with their peer group and that their happiness can be contagious. These activities provide young people with recognition of their work and achievements and increase the presence of the young people in the community. One parent said that "on a personal note so many of my family and friends come along to support the show and say it's the best thing they have seen all year - its great to see the kids perform and gives a real feeling of community". All the young people at the clubs need support to attend and all families have experienced social exclusion. Carers have appreciated the respite and also are able to see their child showcase their talent and be proud of their achievements.

Watching all the young people on the stage at the Glee show gives a feeling of pride and joy even if it's not your child on stage. One young person started Glee and often needed to have time out from the group as he was overwhelmed. He has been able to attend his first club outside school and has been able to overcome his separation anxiety. He is now involved in every aspect of the Glee Club and his confidence and communication skills have improved hugely. Previously, the show has attendance from the social work senior management, a local DJ and the Member of Parliament for East Renfrewshire as well as staff from the local special needs school - Isobel Mair. 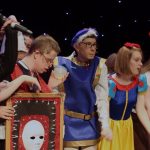