A story by SupERkids

This year we also ran a Harry Potter Film Club for older teenagers. Our mission is for young people with additional support needs to have fun and raise their confidence and for carers to obtain some free time respite from their caring responsibilities.

What Glee and Wee Glee Clubs did

Better Breaks funded SupERkids Program has provided, Glee, Wee Glee and Film club in East Renfrewshire. Glee ran from September 2016 to March 2017 and culminated in a production of Neverland in Eastwood Theatre. The most important objective of Glee is inclusion and it was vital that all young people are involved. Every child irrespective of whether they were verbal or non verbal had lines to say in Neverland (using AAC devices linked to the theatre’s sound system!). We used a drama group called DASE, Dance Act Sing Enjoy, as our service provider. They were so in tune with the kids each week, the club ran from 10-12.30 pm, 2½ hours of drama.

Wee Glee ran for its second year in 2016 and was even better than the year before. It continued to take place in the local Additional Support Needs School, Isobel Mair, and ran on a Monday evening from 6 to 7.45pm, as we could not have access there on a Saturday. This worked very well as the children aged from 5-10 had the safe and accessible facilities including changing facilities that they knew. Wee Glee ran from September 2016 to March 2017 and culminated in a sharing event of the weekly performances. Paragon Music and Loop Theatre were used again and they made each week fun and exciting.

A parent committee member attended each week to take photos and videos and this was then edited to make the DVD for the sharing event when every kid was introduced and had time when the DVD was focused on them. The carers, friends and family were invited to a sharing event where they watched the DVD and interacted with the Paragon and Loop.

For both clubs, the carers had time to spend with other family member. One family had a grandparent in hospital for a long stay and Wee Glee enabled them to visit as a couple rather than having to go singly. Many parents used the Wee Glee time to go shopping at a new shopping complex opened next to Isobel Mair. For Glee on a Saturday morning, many carers focused on the ability to be able to take other siblings to clubs or to be able to do things that couldn’t be done with their young person in tow. All carers had 1.75-2.5 hours weekly respite with more at show and panto and film club ran for 11 weeks!

A carer wrote that “Wee Glee has helped my child to join in more with his peers and the fact that it is held at Isobel Mair means that he is in a safe environment with break out areas if required.

The respite it provides to us as a family is very much appreciated but the main thing is that he enjoys it. The Sharing Event is at just the right level for him as he would be unable to take part in anything more structured than that. A big thank you to everyone involved in organising such a fantastic club.”
A carer wrote that “the club has been a fantastic opportunity for my daughter to meet up and form great friendships through the club. The experience she has gained from the club has helped mature her and give her confidence to stand on a stage and act!”
A significant part of the program is the Glee Show which is filmed allowing our young people to watch themselves, sometimes over and over again, to enjoy the team camaraderie and feel proud of their achievements of being on stage and being part of a bigger event.

A carer wrote that: “Glee helps my child engage in the community while not attending school, it’s a chance to join kids of all ages and let loose releasing energy while learning to be disciplined in learning new creative ideas. Peter Pan and other stimuli which I’m sure she benefits from in her own way as she cannot verbalise, watching, learning, trying new skills which others take for granted. It’s a much needed resource in both our lives.”

What SupERkids has learned

SupERkids decided to change drama service provider and ran pilots to choose the new provider. This gave the parents committee more challenges, as it took a great deal of time and effort but the change has proven to be a great operational success, a fresher and more inclusive dynamic as well as financially more flexible

Through evaluation and discussion, SupERkids realised that a teenage male segment of our young people had matured from the Glee format but still wanted a drama based activity. The Harry Potter Film Club was developed and implemented and although it also took time and effort, the output of the DVD was brilliant and the kids were so proud of themselves.

This years funding allowed us to team brand Glee with t-shirts and hoodies to enhance the feeling of belonging for our young people. These were worn every week and provided the young people with a point of reference similar to their siblings who attend mainstream clubs.

We made the service more personalised by having a member of the parents committee on a rota at each Glee and Wee Glee and used this to increase our communication with other SupERkids parents. Finally, Inclusive Support reached out to new families and in particular those in areas of low income to highlight the inclusive nature of the Glee and Wee Glee clubs.
Top tips SupERkids's top tips for an organisation that wants to run a similar project

If it doesn’t feel right then change it. It will be worth all the hard work. SupERkids changed the drama provider this year and although it took lots of interviews, pilot sessions and meetings with the new people, it was the right thing to do as we were pleased with the level of adaptability and it was cheaper!

Location is vital for young people with additional support needs so fight for your requested location and use every available contact to make it happen. Dignity is vital for our young people so holding the Wee Glee club in the local Additional Support Needs School buildings meant that the younger children could have their personal care needs met in an appropriate environment.

Getting to know you!

Really get to know your target audience. Speak with carers and young people as much as possible and make sure that they understand what is going on and listen to their feedback! By doing this, we were able to change the format of part of the project to ensure that teenagers with verbal abilities were able to attend a film club where they helped to write their own Harry Potter themed story and act it in a you tube video. 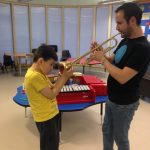