What Holiday Fun 2 did

The support offered was widely publicised through Facebook, website, newsletter, through the schools and attracted 74 new parent carers and 78 children with a disability to the centre with many continuing to get support.

We found that the summer outings were very much a family affair with the whole family taking part and workers provided additional support when necessary. This support was invaluable to some of the families who had more than one child with a disability- one of the families had 4 children with a disability and otherwise would not have been able to take part. Over 100 people thoroughly enjoyed our outing to Edinburgh Zoo.

Disabled children and young people, especially those with multiple support needs, had more opportunities to take part in activities which are fun, stimulating and rewarding, had improved well-being through taking part whilst parent carers got an opportunity to have a life outside of caring through the provision of respite and outings and from this felt better supported to carry on in their caring role- they got a tremendous support for one another

The activities were yet again very successful with all who took part thoroughly enjoying the outings. We were able to provide respite through the outings based on 153 children attending 3 trips for 7 hours each trip and 720 hours of respite for stressed/working carers giving an overall total of 3,933 hours of respite, which is approximately double initially estimated. We were able to offer additional places to families that was originally planned as we were able to negotiate group discounts and often carers got in for free.

74 new parent carers and 78 children with disabilities received support through the outings and the majority have now received other centre services as a result of Holiday Fun.

We now have established links with some of the schools by promoting Holiday Fun through them and will continue to build on this. Time taken to organise trips was underestimated given the volume of parent carers looking to participate. 100 people attended the trip to the Zoo.

How Renfrewshire Carers Centre has benefitted from the funding

It enabled us to identify new carers and promote the services of the centre. Given us an opportunity to provide much needed to respite to carers which we wouldn't have been able to do without the funding Given carers an opportunity to participate in activities as a family with support, where everyone benefiting Supported 54 sibling young carers

60 children and young people will have had an opportunity to participate in 3 outings and/or go on outings to enable parents to go to work or time out.

Fiona is a Parent Carer who has 5 children four of them have a disability. The family had never accessed any support from the Carers Centre until these trips were advertised. Fiona contacted us and arranged to access three trips during the summer. She felt that as she and the children did not know anyone she would manage with the help of a volunteer. The first trip was Edinburgh Zoo and the experience provided a positive outcome for Fiona and the children. They had never been to outing with other families and Fiona had never accessed any help or support. Like many parent carers she felt as a mother it was her responsibility to look after them. Fiona was introduced to other parent carers and that enabled her to see she was not alone in her caring role. Fiona very quickly formed friendships with two other parents and their families and received enormous support from them. As well as the fun and social inclusion the trips provided opportunities for her children to enhance their growth and development, enabling the children with the disability to mix and socialise with other children both disabled and non-disabled. The parent who Fiona met also encouraged her to come along to the Parent Carers of Children with Disabilities Support Group in the Centre that provides support and a safe environment in which parents can share experiences. Fiona is still coming along to the group and is taking an active part. The support received during the three trips Fiona accessed has improved her emotional and physical well being, she feels less stressed, and in turn this has helped increase her confidence. The peers support she received at that first outing has greatly improved her life as caring for a children with a disability can be extremely draining. These trips have been a great benefit the entire family unit by enabling parents like Fiona to see they are not alone in their caring role.

5 outings will have been provided where carers get support from other parent carers, respite organised for carers who are working or under stress, carers are less stressed.

Outings were organised to Edinburgh Zoo, Inveraray, Blair Drummond Safari Park, Transport Museum, Dynamic Earth and The Wizard that Never Woz pantomime where 166 carers, 54 young carers and 153 children and young people with disabilities attended. 720 hours of respite supported 17 families and 20 children and young people with disabilities. Parent carers formed close bonds with the other parent carers supporting one another on the outings. New parent carers to the centre were welcomed on the outings and appreciated the support given by other parent carers.

15 carers will have opportunity to go to their work or get time out during the holiday period through provision of respite.

17 families and 20 children with disabilities were provided with 720 hours of respite to give stressed/working carers a break during school holidays.

Carer A is a young working mother with two children, who had recently experienced a family bereavement and was extremely stressed. She is a registered carer as one of her children has a diagnosis of ADHD and she has no reliable family support at present. Our staff were able to provide support for her to get breaks for both herself and to attend work during bank holiday Mondays, when she had no nursery placements and difficulties with childcare. They supported her by taking her child out into the community to engage in playful activities. Carer A indicated that the support was invaluable and helped to remain in employment during difficult times.

The outings showed how Parent Carers supported one another. We had 74 new parent carers attend who were all made to feel welcome with many of them now tapping into parent carers support groups and other centre services. The support they give one another cannot be underestimated. Carers speak highly of the trips and how the support helps them to feel less stressed.

Nicole is a parent carer who looks after her son Malcolm who has ADHD. Nicole first contacted us regarding the trips explaining, how it is often an ordeal for parents of a child with ADHD it can be exhausting frustrating, embarrassing and depressing. People blame parents and parents often blame themselves. How as a parent she finds herself very isolated with lack of support or understanding. She went on to say how she would love to come to the summer outing and how her son and daughter (who does not have a disability) often miss out on opportunities other children and young people have due to Malcolm’s condition, Nicole feels that this has a detrimental impact on their emotional health and well being. We offered Nicole three trips and the offer of a volunteer to support Malcolm as well as introducing her to one of our parent carers Lorna who has a son with ADHD and would know exactly how apprehensive she was feeling about attending the trips. Nicole agreed to meet with Lorna before the trips. Nicole and her children attended the trips she said ‘ the children had the best time even Malcolm’s behaviour, although not perfect was for him excellent. The support she received from other parent carers was of understanding, non-judgmental and supportive. Nicole stated that she feels really supported as she was encouraged to come along to the ADHD Parent Carer Support Group run by the Carers Centre and stated 'she feels she doesn't know where she or her family would be without the support, ‘I am less stressed when my son kicks off, I manage his behaviour better now and he really tries. ‘When things get difficult or if I have a problem I know I can contact other parents who I have met during the summer outings and the Centre for help'. ADHD makes it very hard not only for young people to join in and share with others, and "play nice"! It makes it difficult for parents as people blame parents because they don’t see the disability!. Being included in these trips has helped me access fun and happy times with my children over the long summers holidays. This has meant improved social inclusion and access to places I could not go myself for me and the children. Without this they would not be able to experience the same as other children and young people. These trips have given parent carers and their children the chance to try out new activities while being supported by staff volunteers and other parent carers. This funding has provided positive outcomes for parent carers and those children and young people they care for equally, improving their quality of life, opportunities and well being. 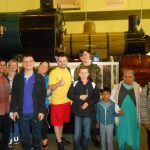