We ran a variety of fun outings during the school holidays for families with a child with disabilities providing fun and stimulating activities for the children. Working parent carers and carers under stress had the opportunity to receive respite helping them stay in employment and/or get a break from their caring role.

What Holiday Fun did

The Parents Support Group and Centre widely advertised the outings through direct mailings, in the newsletter and e-mails to carers and professionals to make people aware of the service we got publicity in the local newspaper.

We have delivered 5 trips during the summer to Millport, Transport Museum, Edinburgh Zoo, Blair Drummond Safari Park and Dynamic Earth. In October outing to M&D’s Theme Park and a family fun filled pantomime at Christmas. Each family were offered up to 3 activities. Carers were offered the opportunity to have a worker attend the trips with their child to give them a break but most families opted to have the outings as a family.

In addition 21 carers received individual respite to help them over the school holidays. This varied from a few hours up to 50 hours of respite. This mainly entailed workers taking the young person out to do something fun in their community, this ranged from going swimming, attending football game to trying new activities such as golf.

Donna and Jim have twins Jane & David who are Autistic and they never go anywhere as a family due to their intense caring role which in turn limits the children participating in activities.

The outings allowed them to be with other parents that understand their children’s condition and the difficulties they face, "This year we managed to go to Dynamic Earth with the help of a worker, having that kind of support with 2 children was fabulous it meant I actually got to see the animals sit and have lunch and a coffee in the afternoon and actually enjoy the time spent with my children. It also gave the children some quality time away from their parents in a fun, stimulating environment, with the added bonus of being able to share the activity.

Donna and Jim also managed to go to the pantomime with Jane and David with the help of a volunteer, "I couldn't believe how much they all enjoyed the pantomime "This has been the best pantomime I've ever been to, I enjoyed it so much, being seated on the platform at the SECC meant that my children where not restricted and didn't disturb anyone else, I usually have to apologise to people around us for the disruption they cause getting in and out of their seats and wandering around. Having the help of a worker with me made my life so much easier and i can honestly say that this is the first pantomime that I actually saw the whole way through since they were born 10 years ago.

Donna and Jim, were able to enjoy some family time together at the outings without the stress they feel on a daily basis, because both children are on the Autistic Spectrum and need additional support when they go out, means that going on outings very rarely happens.
Mary is the sole carer for her daughter who has complex learning and physical disabilities. The school holidays can be a particular stressful time with minimal specialised playschemes available in the area. Mary is recovering from a major heart attack and as part of her recovery attends the gym to get her weight down and fitness levels raised. This is normally carried out when her daughter is at school.

In order to help the carer maintain their fitness regime we put in place a respite worker to enable her to attend the gym. Her daughter also benefited from a worker, as this helped getting her to participate in local outings to the park, swimming etc. The respite enabled the carer to continue to attend the gym to maintain her fitness regime to improve her well being and the fantastic achievement of completing the Paisley 10K Run.
Sandra and Mick look after their son Will, who has a physical and learning disability. Sandra and Mick’s caring role is constant and they very rarely get a break. “Getting the time to spend together is difficult”. “We have very little support with Will, we have no other family around that we can rely on. Any help we do get is from the Carers Centre " Even getting out for a meal is difficult, spending some quality time together allows us to recharge our batteries, which is very rare"

Sandra has become very isolated over the last few years due to her own health deteriorating. "Just the thought of someone else taking on the role of looking after Will for a few hours is overwhelming” Will tried various activities from swimming, watching football to archery and had a great time with his support worker. I could tell he really enjoyed spending time with someone other than me and his dad, These breaks gave both my husband and I some much needed quality time together"

The difference to Sandra and Mick's life meant they actually got respite and some quality time with each other, to have a life outside of their caring role while son enjoyed activities with respite worker giving him a break from his parents and trying new activities.

In the application we had proposed that either the family attended as a family unit or the carer could have a support worker to take the young person they care for to give the carers a break, however we found that there was a third option where a number of families asked if they could go along with their entire family, parent carers/young carers/young person with disabilities on the outings but also to have the support of a worker to enable them to attend as a family unit. Within a supportive setting of other parent carers and to be able to rely on the worker to help support the young person. This gave the family an opportunity for them to be together with support.

Learned that over estimated the amount of respite that carers would ask for. We had estimated that 10 carers would receive 100 hours of respite when in fact carers asked for very little support only what they needed which ranged from a few hours up to 50 hours, which in turn meant that more carers benefited.

10 new carers were supported by Holiday Fun. This was a result of the family being able to do activities together. Parent carers can often find it difficult to entrust their child’s care to someone else and this can take a long time to build up and not necessarily over a short period such as the school holidays, however we may find if this project was to be developed further that more parent carers may take up this option as they have built up a trusting relationship with the Centre.
Top tips Renfrewshire Carers Centre's top tips for an organisation that wants to run a similar project 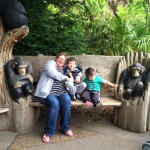