A story by Achievement Bute

Holiday Shorts provided direct support for 10 children with disabilities on Bute to attend arts, sports and outdoor activities of their choice, during school holidays, enabling them to participate in enjoyable activities and develop friendships whilst giving their carers regular breaks.

What Holiday Shorts did

The project did not deliver what was originally anticipated due to the coronavirus pandemic. However, we were able to provide individual support to a total of 13 children with disabilities/additional needs from August 2020 till the end of September 2021. The main recipients were children who had been referred to us by their parents, social workers and local schools. Most of these children had not met the criteria for SDS when initially referred, although some do now. During the lockdown our staff gave parents support to set up Zoom and other help with IT and we provided art materials and equipment to enable families to do activities at home. When permitted we provided direct support on an individual basis. During the summer holidays in 2021 families were individually contacted by our Care Manager who discussed with each parent what support they needed. We were able to provide a wide range of outdoor activities at various locations on the Isle of Bute, including orienteering, beach trips, forest trips, den-building and an outdoor dance/music project. We also provided art classes, film-making, animation, percussion and lego groups after school until the end of September in our new “pop-up” art studio venue in the centre of Rothesay. During the times when children attended these activities parents did a range of other things including spending time with other children, spending time catching up with housework, shopping and in some cases using the time to go to the mainland themselves. We provided our staff with additional training led by a Clinical Child Psychologist and also supported to staff to deal with additional issues facing families arising from the pandemic. In addition we worked with freelance artists, musicians and other tutors who helped develop our online resources, and who also led many of the summer activities.

What Achievement Bute has learned

1. Dealing with unexpected challenges. It is not often that one can say that something unexpected happened to us that has affected every person in the entire world, but of course this year the pandemic did just that. We learned that we had to, and we could, act very quickly and we took many of our activities online to respond to the need to support people. We learned that some children could actually benefit from interacting with their support staff online at home, but that we had to make sure parents received the IT support they needed to allow this to happen.
2. Developing new short break activities. As a direct result of the pandemic we had to develop new activities, not only online, but afterwards when we had to find new venues and new ways of working. We learned that we could involve different people including freelance artists, musicians and others to work alongside us to enhance the experiences of the children we support.
3. Reaching out to and engaging with new families. This was particularly difficult during the lockdown, but we learned that the key attributes of empathy, understanding and the willingness to adapt our own organisational practices to meet individual needs were still essential, and the ability to offer things in ways that other organisations could not offer in a time of crisis was crucial to ensuring families needs were able to be met.

How Achievement Bute has benefitted from the funding

The funding principally enabled us to provide direct support to children who otherwise would have been left unsupported. We did develop new ways of working with partners such as freelance artists etc; it definitely strengthened our reputation in the local community, the word “lifeline” was used a lot in feedback we received from parents. Having the funding allowed us to demonstrate financial viability and security to other funders, and the additional training our staff received helped us build our skills and knowledge.

10 children with disabilities on Bute will tell us they have participated in and enjoyed more activities of their choice during school holidays without their parents present.

In the end we had 13 children participating, although they did not receive the support in the way initially anticipated, due to covid. All families reported that their children had enjoyed the activities, and some comments in particular regarding doing fun activities alongside other children are: Our daughter was encouraged to be creative and learn new skills in differing contexts. Also she undertook new challenges supported by leaders who were innovative and creative themselves to support and encourage. I was surprised at how happily they all went off to each activity (they can usually be quite shy) but they were always keen to come along and get involved!!

One child has many difficulties relating to other children in social situations, largely due to her disability. This year, having had the chance to interact with children in a variety of activities she is now beginning to ask about other children and actively look forward to group activities outside of school where she can meet her new friends regularly. This would not have been possible without the project. Prior to summer, staff had reported that she would often refuse to play in the park when there were other children there and would at times be reluctant to join in with activities involving other children. This is no longer the case - over the last few months, she has gained significantly in confidence and is now eager to go to the park and to join in with activities and events. She looks forward to seeing other children: it is no longer just the activity that motivates her, but also the possibility of interacting/playing with other children.

18 carers of children with disabilities on Bute will report that they have benefitted from more opportunities to relax without their children during school holidays.

In total 20 Carers benefitted. Comments include: It gave me regular breaks just when I needed them. Lifesaver in the holidays. I was able to do things without worrying about how they were getting along- as I knew they would be well looked after and enjoying themselves too. I couldn't have gone away for the day ( to the mainland) without this support- it was such a relief after so many months of not getting to go anywhere.

The parent of one child has a health condition which means she finds it very difficult to take her child to do physically active things such as swimming or playing in the park. For this parent, prior to the project she said she felt dreadfully guilty and her child would be very frustrated and angry at the mum for not taking her to such places. Now that 1:1 support is in place the parent has told us that "my guilt has been lifted, I don't need to keep explaining why I can't do something to my child who's learning disability makes it difficult for her to understand why. She has just settled in to someone else going with her, and I can relax a lot more now- it's been such a change for the whole family".

18 parents/carers of children with disabilities on Bute will report increased confidence in their ability to parent.

In total 20 parents benefitted. Comments include: I feel much more comfortable now that I know the support staff are also using the same strategies when they are out and about as I do at home- it makes me feel we are all working from the same song sheet. In the summer it made me a lot less stressed, as when things were getting on top of me I knew there would be a wee break coming up soon.

One parent who really struggled particularly during the lockdown was offered a mixture of online and 1:1 direct support over the year. She described how she sometimes felt "at breaking point" but that she felt she benefitted hugely from being offered regular intensive support not only from the individual staff members who took her child out to do activities, but also from the Care Manager who was regularly available on the phone or online. Having someone to talk to, who really understood, and empathised, was tremendously reassuring. Being able to discuss how to manage and deal with difficult behaviours was a great help and made her feel less isolated and alone.

20 carers and 13 children with disabilities/additional needs participated and provided feedback. Comments include: The holiday activities have been superb. Getting out of the house again and having the chance to try all these fantastic activities has just made our family's summer. My son, struggles with initial interactions and gets quite anxious about attending events where he doesn’t know anyone. This has been a amazing ways of ensuring that he is able to have lots of social interactions to help boost his confidence, where otherwise over the summer would have been quiet limited. Thank you Achievement Bute. My son had an amazing time. He still hasn't stopped talking about it. Making new friends from other schools and locations. Learning new crafts and being able to express himself.

One boy has been receiving support from this programme since early 2021. At the start he was very oppositional with adults and children and had a lot of difficulties whenever anyone talked about “rules”. He often would deliberately break the rules that other people set. His parent really struggled with his behaviour at home and found it difficult to set boundaries that he would comply with. At school and when he is in contact with other children he could very quickly get into difficulties and often resorted to hitting other people. Since receiving regular 1:1 support he has become much more able to interact positively with other children and adults. We have all benefitted from additional training this year in behavioural support techniques and it has been clear that these strategies have been working well for this young boy. His mum reports that he looks forward to his sessions with Achievement Bute and that he is more likely to comply with requests that she makes of him at home. Staff have reported that he is now willing to share with other children, which he would not do before, and his politeness ( saying please and thank you) has been particularly noted in group activities. The fact that staff pick up straight away on his good behaviour and give him genuine praise has helped him a lot and his mum reports that although he still struggles with his behaviour at home, family life in general is much more calm. 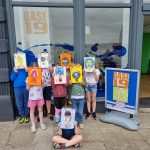