A story by Caring in Craigmillar

We organised 2 short 5 day breaks for 16 older people with dementia to Argour, Ardnamurchan Peninsula, West Scotland which also gave their carers space to organise their own respite break.

What Hopscotch Short Breaks did

We targeted current service users (cared for older people) who attend Caring in Craigmillar who are over 65 years with signs of dementia.

We organised both residential experiences at a Centre in Argour owned by Hopscotch. We had previously used this Centre with other older people and feedback has always been so positive.

Each residential consisted of 5 days/4 nights. Using the Hopscotch Centre as a base we arranged trips to Ben Nevis, The Harry Potter Museum and Bonny Prince Charles Memorial at Glenfinnan. We also recognised that the older people benefited from quieter times in the Centre chatting with friends enjoying each other's company so we do not over burden them with too many trips out.

As a consequence of planning and organising these short breaks well in advance, carers back in Edinburgh were also able to plan how best they could use this time. Feedback afterwards has shown that some arranged their own break, some organised activities in and around Edinburgh that is normally more difficult (shopping trip, family days out). Some carers told us they used the free time to do things around their house that is difficult when the cared-for person is around - one told us they had a good spring clean, another did some decorating.

Mrs A. has been attending day care for several years. For the past few years she has been living with her daughter with occasional respite days with her elder daughter in another part of town. On top of general ill health Mrs A had been suffering from cancer but was in remission. The daughter she lived with regularly was suffering extreme stress and had not had a holiday in years. We took Mrs A on a residential break this year for five days which allowed her daughter and her husband to have a week abroad in the sunshine. Her other daughter was at home to meet Mrs A on her return.
Mr C is suffering from dementia. He has been in day care for over a year now and had settled in well here. Sometimes with someone who has dementia it can be distressing to take them into a strange environment. However it had the opposite effect on Mr C . He positively thrived on the break. For his carer it made a huge difference. Prior to the break she had been toying with the idea of looking at long term care for Mr C. The break made her realise she did miss him about the place and that she would be able to cope provided she was given adequate respite. Mr C remains at home with his partner .
Mrs B. Has only recently started day care. She has over the past years lost two sons and a daughter to drink and or drugs related illnesses. Mrs B now lives in her own home with her grandson, his partner and baby. Mrs B had a major breakdown a few years ago and suffered hallucinations. Neither she nor her grandson had had a break for many years. Mrs B was a wee bit apprehensive about going away and leaving her comfort zone.

The week was a tremendous success for Mrs B. She was more relaxed and happier than she had been in a long time. She forged a couple of strong friendships and has become much more outgoing at day care. Her grandson was able to do some work about the house and stated he had enjoyed the time to do some of the improvements for his much loved gran’s benefit. He also enjoyed the few days with his partner and their new baby

What Caring in Craigmillar has learned

We have been fortunate to receive Creative Breaks funding for a number of years. During this time we have learned lots with regard to organising short breaks for older people with dementia.

By offering such support over and beyond our daily service we can add value to our relationship with both the cared-for person and carer(s). By targeting newer service users we can help raise awareness with carers of the benefit of looking after their own needs: and then actually give them time to realise that respite is of real benefit to them.

Taking older people with dementia away from their familiar surroundings even for the best of intentions can cause them some stress and strain. So be prepared to accept that even if throughout the planning everyone is keen to go, once you arrive at somewhere where the cared for person doesn't know that they do not settle and want to go home.

We have learned not to over plan a programme of activities/trips when on the residential. Having said that staff are aware of different opportunities where they can visit, if appropriate. In our experience we have learnt that older people with dementia cannot cope with too many changes all at once.
Top tips Caring in Craigmillar's top tips for an organisation that wants to run a similar project

1. Have a back up plan in place if a cared for person doesn't settle on the residential

2. Take staff/volunteers with you who are known to the cared for person - this can help reduce the negative impact of change 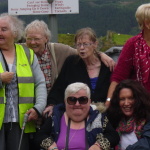