The Horsing Around program provided young people with disabilities or additional support needs access to pony club sessions. Allowing both the young people and their carers respite time on a regular basis.

During the sessions the young people were supported by fully qualified staff and along with pony rides they also participate in activities such as stable management.

What Horsing Around did

Over the course of the last year Mid Argyll Youth Development Services supported 12 young people with disabilities and additional support needs to access respite time, for themselves and their carers, through facilitating their ability to attend pony club on a regular basis. Over 24 weeks Mid Argyll Youth Development Services staff took 2 groups of six young people, on rotation, to participate in the pony club program.

The staff and young people left on a Sunday morning and returned early in the afternoon to attend the nearest equestrian center (Argyll Adventure) which is approximately 20 miles away. This gave the young people and their carers approximately 4 hours of respite time during each session. In total 576 hours of respite was given to young people with disabilities and additional support needs over the course of the program. In addition to this around 25 carers were supported over the course of the year.

While there children were attending pony club carers received 4 hours respite on a regular basis. Many reported back that this allowed them time to relax, spend time with other children, meet friends or catch up on shopping/household work. Carers indicated that they were comfortable in the knowledge that their children were with highly qualified staff and being able to socialise with other young people. Through our links with partner agencies such as health, social work, education and our weekly parents support group for those with children whom have disabilities (MAPS) we were able to appropriately advertise the program and receive referrals.

The case study below is a true account of one young person's experience. His name has been anonymised as requested.

James is a 16 years old student at the local high school whom was referred to Mid Argyll Youth Development Services for support via education. He has sever learning difficulties due to suffering from Foetal Alcohol Syndrome. In addition to this he lacks confidence, social skills, worries about family a lot and has very few positive learning outcomes in his schooling. He lives with his dad and brother in a very rural area which makes accessing activities difficult.

James loves being outdoors and as part of the initial work Mid Argyll Youth Development Services did with him was to take him one day a month to the nature reserve as a volunteer. In light of this education, social work, Jame's dad and ourselves felt he would benefit from participating in the horsing around program. James engaged very well with the program despite being apprehensive and nervous to begin with.

Feedback from both workers and the stables stated that he had a natural talent for horse riding and within a quick space of time his confidence and self-esteem grew, so much so that he began helping during pony club with the younger age groups. He would guide some of them on their ponies during lessons and also help them with their stable management tasks. After his block sessions finished he continued volunteering at the stables through his own choice. The school have even seen a positive change in James since he began the program.
The case study below is a true account of one young person's experience. Her name has been anonymised as requested.

Laura is 15 years old and was born with Cerebral Palsy, which has affected her physical abilities. Throughout her life she has had numerous operations and at times been on crutches or confined to a wheel chair for long periods of time. The condition means she has a lot of muscle stiffness,especially down her right leg, poor coordination and lack of balance. All of which have restricted her in participating in any regular sporting activities.

Taking part in this program was the first time Laura had been on a horse as her family could not afford and did not have the time to support her in this activity, even though it was something she had always wanted to try. She has loved every minute of the program and it has proved to her she can participate in regular physical activities like her peers. Over the months her balance, co-ordination and physical strength have all improved due to the horse riding program. She has much more confidence in her physical abilities now and enjoys socialising with others on the program.
The case study below is a true account of one young person's experience. Her name has been anonymised as requested.

Lelya is 12 years old and suffers from High Spectrum Autism. She attends the learning support centre in the local high school. She struggles to form personal relationships, has limited speech, if not at school is always at home with the family and does not like being around noise. Lelyas mum was apprehensive about her participating in the horse riding program due to the issues she had and the fact that she had not socialised like this before.

Due to this we gave Lelya an introduction session at the stables on her own. She was able to meet the staff and her mum could come along and see what would be happening. Lelya was nervous her first time on the horse and her mum's instincts were to take her off, however the highly qualified staff calmed mum down and asked her to give it time. After about 10 minutes Lelya settled in well and mum has become amazed at how she has progressed. She enjoys going, talks about horse riding at home and school and travels with others in the car.

She is slowly starting to interact with the others in her group and at the stables on that day. She now trusts and gets on well with the staff and can go on the pony rides without mum around. The sessions have also been good for mum as it has helped her let go a bit and given her access to a service she can support and trust.

This fund has allowed us to provide a unique service for young people with disabilities and additional support needs. A service that has both supported them and their families. The program was positive for all involved and showed that even a little respite time (4 hours a fortnight) for families could make a huge difference.

At times the travelling could be challenging for the young people but with the support of the workers this got easier as the weeks went on. The positive outcomes of the program means word has spread via the children and their families through school, community etc. meaning we are now getting contacted from other carers looking for support.
Top tips Mid Argyll Youth Development Services (MAYDS)'s top tips for an organisation that wants to run a similar project

Work alongside and regularly communicate with the activity provider.

This allows all involved to be fully briefed and to make sure each young persons individual experience is positive.

Work closely with the carers to ensure they are at ease and comfortable with who their child is with, where they are going and what they are doing.

Introduce them prior to both the staff running the activity centre and looking after there children. Encourage them to come along to special events within the program, such as children getting their pony badges etc. 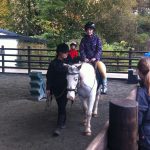