A story by No Limits

We organised a week long activity holiday to Calvert Trust in Kielder for children and young people with disabilities and additional support needs and their parents/carers. They took part in a programme of activities.

We are a multi- sportsclub for children and young people in the East Central Scotland area and we specialise in providing sporting and social opportunities. We also organise weekend activity breaks and week long activity holidays

What Kielder Holiday Project 2016 did

We took 50 people (members and their carers and two volunteers ) for a week long activity holiday including full board at the Calvert Trust Holiday centre in Kielder, Northumbria at a cost of £730 per person

They took part in the following activities:

These opportunities are limited to people who are members of the club ,the chance to take part is advertised internally by e- mail, poster and by word of mouth

We used questionnaire forms to measure the differences that people perceived using quantitative and qualitative measures and these produced strong positive results in most if not all cases.

The questions and results are as follows:

Would you go on a holiday to a place like Keilder again? There was a 100% response for yes.

Did you think of it like one of the services you get, like going to the doctors or dentist? There was an 80% response for no.

Do you think it was a good way to use money given to us by the government and different charity groups? There was a 98% response for yes.

Did you make any new friends? There was a 82% response for yes.

The friends that went with you, did you get to know them better? There was a 94% response for yes.

Do you feel going on the holiday helped you? There was a 100% response for yes.

Was it good that the holiday was organised by other carers? There was a 98% response for yes.

Do you think other clubs like No Limits should organise holiday’s like this? There was a 98% response for yes.

What did you think of the size of the group? There was a 100% response for just right.

Has the holiday made you Feel More confident? There was a 94% response for yes.

Do you know more from talking to people? There was a 88% response for yes.

Do you know more to help you in your role as a carer? There was a 60% response for yes.

Do you think holidays like this make you feel more healthy? There was a 90% response for yes.

Did you try out something new? There was a 70% response for yes.

Do holidays like this make you feel better about yourself? There was a 95% response for yes.

Did you or the person you care for do the best you have ever did in one of the activities? There was a 95% response for yes.


Did you or the person you care for try things that you would not have tried before? There was a 97% response for yes.

Was the holiday well organised? There was a 100% response for yes.

How well did you enjoy the holiday? There was a 92% response for excellent. (two thumbs up sign)

How safe did you feel? There was a 86% response for excellent

As a carer or cared for person do you feel better supported? There was a 70% response for excellent

How well did you like the food? There was a 70% response for excellent

How well did you like your room or lodge? There was a 68% response for excellent.

Supplementary questions for 2016, 70% reported they had made two or more new friends. Comments/Ways in which carers reported how they felt better supported included:

Nice to know the government is supporting carers in this way. Feelings of support from people in the same boat.
Better understanding of problems others face. Experiencing feelings that you were not being judged by your child’s behaviour all the time. Being able to talk freely about getting help. A great way to holiday with others in the same situation.

Good support by being able to leave child in the care of others and enjoy activities. Learning new ways to cope and make things fun & learning new skillsa and becoming more confident
The Dad's Story

Going on holiday, or even a day out has always been stressful occasion as our son Michael is 6 years old and suffers with cerebral palsy, learning difficulties, epilepsy & is non-verbal. This means we can feel exhausted before we arrive planning for every eventuality and worrying about Morgan “acting up” and through frustration or not understanding.

Michael has been attending the No Limits Sports Club for just over 18 months, and we were fortunate to be given the opportunity to go on holiday to the Calvert Trust Kielder with his mum & older brother Edward (11) . This was our first time at outdoor activity centre as we had never really thought that there would be a lot of activities that Morgan would be able to participate in.

In the lead up to the week at Kielder, we received a list of all the activities that would be taking place over the week. Most of them none of us had tried and thought we would find a challenge, never mind someone with a disability. How wrong we were!

When we arrived the first thing that struck us was the location. Set in stunning Kielder Forest Park, surrounded by sprawling countryside, it offered a safe haven for the kids to play. Knowing that we had familiar faces from the club with us brought a huge sense of comfort, and throughout the week became more of an extended family.

On first activity day, our group headed out on the golf carts for a scenic tour of the forest and Kielder Water. What was supposed to be a relaxing excursion soon descended into a water fight on wheels. Everyone had a ball including the unfortunate centre staff driving the buggies who got soaked. This set the tone for the week with everyone looking forward to the next activity.

In the afternoon we switched from water on wheels to water raft building in the pool. When Michael realised he was at the pool, he let out an excited scream as swimming his one of his favourite hobbies.

We were split into teams to see who could make the best raft, even better if it floated when someone sat on it. The race was on with adults & kids trying to do their best with the tools & tarpaulin. Once built we had to send the young adults & kids across the pool without sinking which did take a few attempts, partly due to it starting to break apart & partly due to the fits of laughter. We rounded off the session with a play in the pool.

Over the course of the week, it felt like we tried an endless amount of activities, all which offered different challenges. We were able to try out the indoor climbing wall & the high ropes. The boys loved the king swing, particularly the 30 feet height that it was released from, whereas I turned a nice shade of green. I did get a nice pat on the back from Ethan for giving it a go. We also tried archery, problem solving, bush craft skills and motor boating, as well as a day out at the birds of prey centre and Kielder Castle.

One of our favourite days was at the lake. We had an amazing day on the water canoeing & sailing along with a BBQ.

The activities were a large part of the holiday and were fantastic, with a lot of proud parent moments when we saw our boys trying something new and somewhat scary at times. But for us this was only a part of it. Being around families in similar circumstances and not feeling like the odd one out or the parent of a bad child, when it gets too much for them, allowed us to relax and enjoy our time. We also got to know more about a friends from the club and learn about the different support functions available to us as a family.

When we got back from Kielder we organised a photobook to be printed for Morgan. When we have family or friends visiting he grabs the book and excitedly shows all the great memories he made.

Recently we went on holiday with my brother Michael’s No Limits Sports Club. We went to the Calvert trust in Kielder, which is an outdoor activity centre specialising in helping people with disabilities participate in them.

Michael is 6 years old and suffers from cerebral palsy, learning difficulties, epilepsy and does not speak. As a 11 year old big brother this can be quite sad as we don’t get to do a lot of the things brothers normally do, like go out on our bikes or go to the same school. On past holidays we have not been able to go to kids’ clubs together as they don’t always have staff that can cope with him.

I was looking forward to going to the holiday as I heard lots about the different activities I was going to be doing even thought I was nervous about some of them.

During the week Michael & I tried out lots of activities. I tried climbing on the indoor wall and high ropes, archery, laser clay shooting, boating & sailing. One of my favourite ones was the King Swing which I done twice in a row.
It was great doing them all as Michae was doing them as well, and I was able to help him. I also really liked all the staff that were there.

My proudest moment was when I saw Michael climbing up the indoor wall on his own with very little help.
Over the week, I was able to learn lots about the different disabilities and how I can help. I also made lots of friends.

What No Limits has learned

People are more likely to try new things when they see others doing it. Small changes can produce unexpected benefits. When selecting people for groups ensure that there is a fair spread of ability.
Top tips No Limits's top tips for an organisation that wants to run a similar project

Have a plan 'B' ready if things don't go to plan.

It's normal to worry but don't let it get to the stage where you are losing sleep.

Try to capture the moments when things go really well and use them later to motivate you further. 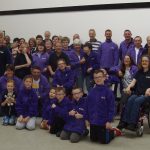