A story by Home-Start Dundee

We provided twice weekly group sessions to Kinship Carers and their pre-school children in Dundee providing them with the opportunity to share ideas and advice with other Kinship Carers whilst children were looked after in our crèche.

We also provided information sessions by professionals on relevant issues. Kinship Carers were also offered buddying and mentoring support through a home-visiting volunteer.

What Kinship Carers- Home-Start Dundee did

We recruited a Co-ordinator and a Group worker, the Co-ordinator was responsible for promoting the service and assessing and reviewing the needs of the referred Kinship Carers. Referrals were made by Social Workers and other Kinship Groups, together with self-referrals. Our Group worker recognised that the Carers required small nurture groups to ensure their needs were met and capped attendance to 6 Kinship carers per session and these were held in blocks during school term time.

The Carers were very involved in the creation of the programme of events ensuring these were beneficial to them. During the Group sessions Kinship Carers received information and advice from professionals around Benefits, managing money, health, child development and drugs. These were offered as a group session but also as one to one sessions if required.

The Kinship Carers helped a Fairer Scotland Project through a focus group to discuss issues around poverty. The NHS POST (Paediatric Overweight Service Tayside) also involved the Kinship Carers to assist them in the development of their Healthier Families Project. Whilst the Kinship Carers were taking part in these information sessions the children were looked after in the creche and took part in various age-related activities.

Paula, who had a residency order for her granddaughter was feeling totally overwhelmed, struggling to cope financially and lacked any social life with her friends. At the point of referral she was ready to give up the residency order as she could not cope. Once we had built up a trusting relationship we encouraged her to discuss her case with the ADAPT team (Kinship Carers were reluctant to divulge information around their ability to cope both physically and financially).

The ADAPT team worked with her to ensure she received all her entitlements, many of which she was unaware of and was not in receipt of. She was entitled to money back and this enabled her to fix up her house, pay off some debts and take her grandchild on holiday. Her self-esteem and self-confidence have increased enabling her to take on employment and she is now enjoying her life with her grandchild.
Jane a grandmother with custody of very young grandchild. Jane felt overwhelmed with the care of her grandson, fearing that things had changed since she had young children and she did not have current knowledge around the type of healthy food and activities for him. During group sessions we promoted healthy exercise, healthy eating and healthy lifestyles. Jane along with other carers were taught about nutritional health for children and engaged in active sessions for babies and toddlers promoting floor play, fine and gross motor skills activities.

Jane felt that she had not developed a strong attachment between her and her grandchild and we carried out various activities to promote this such as reading and singing. We also promoted stress management through discussion and relaxation techniques. Jane is feeling more informed, less stressed and more able to cope.
Jennifer had given up her job once she was granted custody of her granddaughter. She felt completely isolated and her friends could not relate to her situation. Attendance at the Group enabled her to meet up with people in similar situations. Jennifer was keen to return to some sort of employment and we helped her look at various opportunities.

We encouraged and supported Jennifer and another Carer to meet with the course leader of the Child-minding Course at the local college. We facilitated the meeting and Jennifer started her course with support from us. She has now completed this and is now registering as a child-minder. She feels much more in control of her life and has also widened her social networks.

What Home-Start Dundee has learned

This opportunity has enabled us to put together a package of information for Kinship Carers and has created mentors for new Carers who may come along in the future.

We recognised early on in the Project that we needed to build a trusting relationship with the referred Carers as many were apprehensive about divulging information which they perceived would question their ability to look after the child in their care. We also recognised that they benefited from a small nurture group rather than a large group. This restricted the number of carers we could support and we did not meet the set target, however we feel that we would not have had the same positive impact if we had supported the carers in the way we had originally planned.

Kinship carers who have been supported by us have promoted our service through word of mouth and encouraged others to self-refer.
Top tips Home-Start Dundee's top tips for an organisation that wants to run a similar project

Ensure that you give enough time for the initial set up of the project, recruitment and training of staff and to establish the project.

Ensure you spend time building a trusting relationship with Kinship Carers as they are apprehensive of admitting the stress they are under for fear of having their child removed.

Be prepared for strong opinions in group settings and ensure you have the skills and capacity to deal with any flare-ups in a supportive manner. 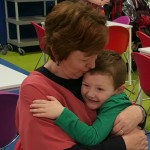