LifeCare - Time Out for Carers Aspirations and Needs

A story by LifeCare (Edinburgh) Limited

We provided carers of people with dementia, long-term conditions, and disabilities in Edinburgh with a total of 500 hours of replacement care over a year to enable them to plan and take time for themselves away from their caring role to do the things that were most important to them.

What LifeCare - Time Out for Carers Aspirations and Needs did

We successfully delivered this service using our existing social care staff in our Outreach Service. We promoted it widely: through the Resource and Referral Groups, across care and carer networks, in our newsletter, GP surgeries, libraries, dentists, on our website, in e-flyers, to all sorts of places.

Carers who wanted the Service contacted us and participated in a 'before the break' survey when they 'phoned us. This captured some baseline data about the carer and the person they supported for comparison later on.

'Time out for Carers' was completely carer-designed and led to spend time doing what they most valued. The person with care needs had a lovely time in company and both were able to pursue their own interests.

Carer activities varied in length and included: meeting friends for lunch, going to football matches, Christmas shopping, the theatre, medical and personal appointments, attending university lectures, Pilates and other fitness classes, spending quality time with other family members on long walks like they used to, and time alone to refresh .

Activities for people with care needs included going on local outings and sometimes further afield, short walks, reminiscing over photograph albums, stories of their travels, time during the war, playing chess, help with baking, having a good blether about all sorts of things and enjoying the company of staff.

When the break was over, an 'after the break' survey was completed with the carer by 'phone. This was checked and discussed with the carer to see what difference the carer had experienced as a direct result of having had the service. Information on the cared for person's experience was also collected. Carers and those they supported rated the service very highly. Lots of lovely comments.

Carer A supports her 87 year old mother who has dementia and who is living at home with her. Her stress levels were high and she found the demands of caring for her mother overwhelming at times, which affected her physical, mental and emotional wellbeing. She felt constantly exhausted, in a rut, and often tearful when her caring role got too much.

The availability of the service gave her the impetus to recognise that she had needs and to take the opportunity to prioritise these for her own health's sake. What made a difference to her was being able to take up Yoga again, which she used to enjoy and greatly missed. She joined a local class during the daytime, twice a week, and she attends this regularly now. She got to know others, which expanded her social network, and after class they would often go for coffee/lunch and a chat.

Although her caring role still presents challenges for her, she feels better able to cope and continue in her caring role because she feels in a better place physically, mentally and emotionally to do so, which had benefits for her relationship with her mother also as she felt less tense all the time.
Carer B looks after Mum who is 74 and developed vascular dementia several months after a stroke which she had 2 years ago. She looks after Mum at home and felt the isolation and drudgery of it all which really got her down and she was on anti-depressants, which she didn't like being on. What she really missed was meeting up weekly with friends again for shopping and lovely, lazy lunches and a good catch up.

She felt that this had helped to reduce her sense of being cut off from the world and was something she looked forward to immensely and greatly appreciated. She felt socially connected again and it put a skip back in her step. Her medication has been reduced. Having the time to re-connect really made a huge difference to her and it helped her to realise that by prioritising her own social needs that it was possible to enjoy life again outside of her caring role.
Carer C (49 yrs) looked after his 82 year old Mum who has dementia and who absolutely did not want to go into a care home and made it clear to him that she wished to stay at home. The support from the service helped him over a particularly rough patch. He was very highly stressed already having a stressful job, suffered a suspected heart attack and was hospitalised, and had been subsequently signed off work for 3 months prior to the service starting.

The 'Time out' service supported him with replacement care and gave him the 'head space' he needed to sort out some financial matters, a carers assessment for himself, receive counselling for stress and time to organise Direct Payments to cover the cost of receiving a regular service for Mum and respite for himself longer term to allow him to sustain and continue in his caring role.

What LifeCare (Edinburgh) Limited has learned

The funding helped us to reach new carers who were 'under the radar' and who would not have accessed this free support had it not been made available.

We found that by carers asking us questions about whether the service could do 'this' or 'that', that their perspective on possibilities helped us to think differently about what was possible for the service. For example, an unexpected outcome for the service was that some new carers viewed LifeCare's 'Time Out for Carers' as an opportunity to trial the service before they committed to it longer term for the person they supported. Their questions highlighted something very important to us - that new carers are anxious about starting services for all sorts of reasons.

One way of overcoming this was to try the service out, as they suggested in their questions, without any obligation to continue if they felt it wasn't right for them or those they supported. Their questions were the catalyst for the idea to promote the service differently to new carers and to implement 'try before you buy' free taster sessions, which are proving to be successful and popular for carers who want this option.

Carers who accessed the service were clear that short, regular breaks are important to them and valued. The breaks themselves were what carers wanted them to be and were often normal day-to-day activities which other people who are not in a caring role might take for granted, like being able to meet and catch up with friends, pursue interests and deal with practical matters.

The modest intervention of a regular short break made a positive difference to the lives of carers and demonstrated an improvement in health and wellbeing, carers accessing more opportunities outside their caring role and being better able to sustain their caring role and to access services to support their needs as well as those of people they support.
Top tips LifeCare (Edinburgh) Limited's top tips for an organisation that wants to run a similar project

Carers have great ideas about service development and delivery. Follow through on these.

Carers who accessed replacement care offered in LifeCare's 'Time out for Carers' service, experienced control over their different situations. They were able to make decisions about their own needs and what was most important to them and then went out and had the break that they planned, which was very empowering.

Try to find ways to capture carers' journeys - the 'before' and 'after' or at different points along the way. These are so essential in being able to demonstrate the difference that carers experience as a direct result of the services you provide. 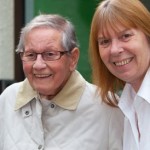