A story by MND Scotland

We provided grants directly to carers who look after someone with Motor Neurone Disease.

What MND Scotland Time to Live Grants did

We largely continued the process that has worked well over the last 2 years, a straightforward application form that is considered by a panel of 4 people all within Motor Neurone Disease Scotland. There were 3 deadlines throughout the year however, because Motor Neurone Disease can develop very rapidly, we would also fast-track decisions where appropriate.

Applications are circulated by email so it is easy for us to confer quickly. We tightened up the procedure by asking recipients to sign and return a Terms and Conditions Form, agreeing to use the grant by 31 October 2015 and to return the short feedback questionnaire. The letter also asked people for bank details if they wished to be paid by Bacs rather than cheque, most people took up this option which meant they received the grant money as soon as possible and our admin time was reduced.

The grants were regularly advertised on our website and in our newsletter Aware. Most importantly however the programme was actively promoted by all staff coming into direct contact with people with Motor Neurone Disease and their carers. Our Welfare and Benefits Officers and the specialist nurses in particular have been able to identify those in greatest need of 'time out' and have encouraged and helped them to apply.

As a result of increased fundraising income we were very fortunate to be able to contribute funding from our reserves in order to meet demand for our Time to Live Grants. Building on this award of £15,000 from The Short Breaks Fund we were able to make a total of 75 grants benefiting in total 83 carers and 76 cared for people with Motor Neurone Disease. The number of applications continues to rise each year.

We had a very high rate of return for the feedback forms which showed beyond doubt what difference the grants make to carers and those they care for. We are therefore continuing the programme in 2015/16 with funding from our own reserves for an expanded 'Time Out' grant scheme which is now up and running.

Now she can take Ian out to enjoy a change of scene and she has the freedom to go out herself with her granddaughters or to see friends. She describes the grant as 'Invaluable....had numerous days out covering coffee, meals with family and friends.'
A mother with Motor Neurone Disease spent 5 days at Center Parcs with her family. Her daughter Kimberley was her main carer and she described the holiday as 'magical....we made some special memories that we will always cherish.' The break helped Kimberley cope with caring because her brother saw how much support their mother needed and after the break he helped more with her care. Kimberley said this 'in turn helps me too. Despite my mum's deteriorating condition, I am better able to care for her now.'

Sadly, the lady has since died and, at her request the family have made a donation of £500 to our new Time Out Grant Programme. The original grant has therefore resulted in a legacy to help someone else have a much-needed break.
David applied for a grant to take his partner on a break just after she was diagnosed with Motor Neurone Disease. Totally shocked they didn't know where to turn, in their application David wrote 'you just don't realise what it takes and what help you can get it's a bit overwhelming and this is the day after the diagnosis.'

In feedback later he highlighted the difference it made to them both that 'someone/organisation cared enough in the first place.' He said that 'this was the first time Alison had ever applied for anything like this and she wasn't too keen...But once we spoke about it and applied it's made it easier for her to do this and she is now telling other people about the organisation who can help them .'

In this case the Time to Live Grant has been a catalyst for both this couple and others to approach potential sources of help.

What MND Scotland has learned

With only minor changes to our processes we awarded more grants in response to demand and received very positive feedback about the difference they made. So the learning is, recognise when something is working and don't change it if you don't need to!

Of the 38 applicants, 27 heard about the grants from one of our Welfare and Benefits Officers or their Motor Neurone Disease specialist nurse. This shows us that direct contact is highly effective at encouraging people to think of taking a break or other time out.

Because carers are busy returning Feedback Forms is not likely to be a priority. We found this year that people sent their forms back more promptly when they were asked to do so 'within x amount of days'. We provided a Freepost return envelope to save carers time and cost.
Top tips MND Scotland's top tips for an organisation that wants to run a similar project

Keep the application and feedback process as clear and straightforward as possible.

It defeats the purpose if the process of applying for a grant is itself a source of stress for carers! Offer people help to complete forms if appropriate.

Make sure the grant-making panel can confer easily and speedily. Choose people who are generally available, have access to email, and will respond promptly.

This helps with smooth administration for the applicants and for your organisation; most importantly, it also means you can give help quickly to someone in crisis, or who needs to change their plans.

Be flexible. Give people the opportunity to have the break that is right for them, and help them if possible still to use the grant if things change and they can't use the money as originally planned. 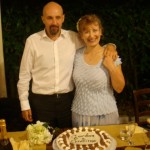