A story by Quarriers

The Moray Moments Project was delivered by Quarriers Carer Service Moray to provide a 6-week programme of 12 accessible short breaks during school holidays to include: short breaks young carers aged 8-12, short breaks for young carers and their cared for to
participate together.

What Moray Moments did

Moray Moments was delivered over 8 weeks to work flexibly with providers to ensure activities were available over weekends and the school summer holidays. Young carers preferred to focus on outdoor activities that enabled them to spend time together and have new experiences. This included: raft-building, coasteering, gorge walking, mountain biking where young carers achieved their goals, Mountain Biking Level 1 and kayaking and paddle boarding

Each day was designed to build skills and confidence for young carers whose Young Carer Statement identified significant need for self-esteem, increased peer support and breaks from their role.

All equipment and refreshments and meals were provided, along with transport, ensuring each young carer was able to take part, regardless of location or family circumstances. Activities were delivered across Moray enabling young carers to travel to new areas, giving them a full ‘day out’ experience.

Activities for young carers and their cared for included days out at theme parks, bushcraft sessions, cookery workshops, jewelry making workshops and flexible-use vouchers for outdoor activities including paddle boarding, mountain biking and archery. The latter was in response to the different interests and requirements of specific families and enabled smaller groups to attend all-ability activities together.

This project also supported two young carers aged 5 and 6. In both cases, the cared for is autistic and struggles in crowds and with loud noises. Working with a local theme park and the families, we were able to tailor a visit that allowed a real break, gave the family quality time together, and enabled the young carers to have fun in a setting often not accessible for them due to the needs of their sibling.

Each of the Creative Breaks priority areas was met through our project.

What Quarriers has learned

Moray Carers Support Service has learnt the following from delivery of the Moray Moments project:

No matter how well prepared we think we are, there’s always something last minute that needs addressed. Initially we tried pre-booking for the whole project, which proved difficult and then we booked activity by activity, however we still had to arrange transport at short notice for participants. For others they were simply unable to take part due to challenges and commitments in their own lives. In anticipation of issues, we operated a waiting list for several activities, to fill any vacant spaces, but sometimes this was just not possible.

Local providers were also facing significant impact due to the Covid-19 pandemic and some were unable to deliver suitable face to-face activities for our young carers. As we live in an area with very few alternatives, we decided to offer online activities too. We have recognised that balancing online and face-to-face opportunities is something we may need to keep in consideration for this future.

The Moray Moments project has helped us consider how we may offer inclusive opportunities for the whole family so the young carers can benefit from activities that other families may take for granted.

Budgeting – we over-estimated the likely cost of replacement care. Fortunately, it was not necessary to provide as much as we anticipated thanks to the timing of activities and availability of alternative care through existing care packages and summer Playscheme. However, transport costs were higher than expected due to the need, initially, for young carers to travel separately from different parts of Moray to adhere to restrictions.

How Quarriers has benefitted from the funding

Creative Breaks funding has helped strengthen our Service’s reputation with young carers, families, professionals, including Social Workers and Teachers plus local providers. Being able to offer a varied project of activities, tailored for individual young carers and cared for based on need enabled us to be flexible and deliver in response to changing circumstances. The funding also enabled us to have dedicated Staff time to support young carers to be involved in the co-production of the project. Initially, there was understandably some reticence amongst some young carers in terms of meeting with a new group of people after such a long time of not socialising. However, our Family Wellbeing Worker was able to support young carers to explore, individually and through online group discussions, what concerns and barriers they envisaged and were facing that was causing their reluctance. Through discussion, they were supported to explore these to determine how to mitigate these to enable them to feel comfortable to participate.

45 young carers will have participated in activities that give them a break from their caring role.

A total of 38 young carers participated, with all taking part in at least 1 activity, and some taking part in several. This was slightly less than anticipated as some did not take part as planned, due to unexpected other commitments, or a change in circumstances. All the young carers benefitting from the project were able to take time out from their caring role and have fun with others, whether that was their own family members, other young carers, or both. All young carers who completed evaluation forms stated they recognised the time as a break away from their role. By involving young carers in the co-production of the project, the final offer was guaranteed to suit everyone, at least in part, which meant no activities had to be cancelled or changed.

Elaine (name changed to protect confidentiality) is a young carer for her older brother, who has autism. Over the last couple of years, he has become increasingly aggressive, and Elaine often spends most of her time at home in her bedroom. She loves her brother and understands that his condition makes him behave this way, but lockdown left her feeling afraid of him, and her parents were concerned that she was withdrawing from friendships that previously had helped her, due to feeling embarrassed or awkward about the situation at home. Referred to Moray Carers Support Service in early 2021 by her Guidance Teacher, Elaine talked with her worker about her fears, and was supported to learn techniques to help her cope with her brother’s behavior and her feelings. She took part in several outdoor activities in the project, and over the course of the first couple of sessions went from staying at the back of the group, to ultimately helping other younger carers to join in. Elaine’s Mum reports a huge change in her daughter’s demeanor, and once Elaine went back to school, she seems to have comfortably resumed her friendships, and her family are very pleased with this outcome.

Carers will feel better supported to sustain their caring role.

Throughout the project, Service staff worked with providers to ensure young carers had every opportunity to talk openly about their caring role and its impact during participation in their activity. Several young carers taking part were new to the Service and not all were used to sharing information about their role. By giving them the opportunity to have valuable time outside their role it provided them with the opportunity to meet other young carers, hear their stories and begin to put their own experience into context. In doing so, peer support developed informally, and natural alliances formed that for some have continued beyond the project. Phone numbers were exchanged, WhatsApp contact has been established, and we are aware of young carers meeting up independently to maintain their friendships. Feedback from participating young carers indicates that 82% feel more able to continue in their role as a result of the project.

One family were experiencing significant challenges due to the terminal condition of a parent. Fully aware of the circumstances, the young carers approached the school holidays with a certain amount of trepidation, knowing that Dad’s prognosis meant he would be unlikely to see them return to school in the autumn. With the parents’ consent, the 3 young carers were encouraged to take part in as many activity days and sessions as was practical, offering valuable time away from the unavoidable tensions at home and the opportunity to ‘let off steam’ with other young carers. By mid-summer, Dad was in hospital and Mum staying there most of the time, so the young carers were sometimes collected/returned directly there. Mum felt comfortable knowing the young carers were safe and busy, and that Service staff were available if the young carers needed to talk. The young carers themselves made the most of their time and developed some close bonds with others taking part. This meant when Dad sadly died, the young carers were keen to continue with their activity programme and were able to speak with Service staff and other young carers who knew what was happening and would enable them to talk freely. As a result, Mum and the young carers all stated how much more positive their experience was than it could have been. These young carers continue to have a caring role for Mum, who has her own health concerns however, their ability to manage and understand the impact of being a young carer is much better. Through support from our Service it has enabled them to develop strategies to cope with their role and recognise the importance of taking time out to do things they enjoy.

Carers and the people they care for will have improved wellbeing.

The focus throughout the Moray Moments project was to give young carers the opportunity to choose the activities they wanted to participate in, based on availability locally, and then decide the most appropriate days and times. This ensured the young carers felt ownership and our staff observed increased confidence and positivity within the group involved by supporting them in this way. Accessing outdoor, physical activities as well as indoor more relaxed ones meant the project presented something for everyone, with fun and joining in together being the main aim. Participants and families reported improved wellbeing and more broadly, stating they were “feeling better about things”. Feedback was also gained from a teacher who commented that he is “beginning to see a difference in M’s confidence”.

Douglas (name changed to protect confidentiality) is an 11-year-old young carer for his Dad, who has multiple health conditions. Mum and Dad are divorced, and Douglas’ siblings live with Mum. Douglas worries about his Dad so chose to live with him. This has added to already difficult relations within the family, and Douglas can often feel his loyalty torn between his parents which causes him significant anxiety and stress. Douglas also spends some time each month with foster parents, giving both him and Dad some valuable respite, however Douglas worries about Dad the whole time he is away from him. Encouraging Douglas to take part in Moray Moments was a long, slow process, but over the course of a few activities he became more comfortable, and Dad reported Douglas talked ‘nonstop’ after one activity. As a result of participating in the Moray Moments project Dad stated he has seen a major change in Douglas’ wellbeing, which in turn makes Dad less anxious about how his conditions are impacting on Douglas. “He was so nervous & moody before he went but he came back all smiles and stories and is really looking forward to doing more things. I really am truly grateful for everything you are doing”. 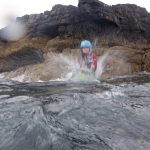