A story by Renfrewshire Carers

We provided carers and their loved ones with a varied programme of music and movement initiatives. The programme aimed to encourage and inspire participants to engage in relaxing and fun activities, harnessing the social, physical and mental health benefits of the activities.

What Music and Movement did

We delivered four elements to this project, including: a drum circle, guitar circles, group fitness classes and personal training sessions. Activities took place within our centre and externally in a local gym environment and a community centre.
Our participants were diverse and were identified by staff involvement, observations and signing in sheets. Most responded to the advertising of the groups within the centre, our e-bulletin and through social media; with social media being the most effective to reach new Carers.
The project was accessed by Carers and their loved ones. The movement initiatives attracted mostly Carers and the music initiatives attracted both the Carers and their loves ones. Respite support was also provided to the Cared fors with befriending in the home support and local community trips.
The project allowed us to recruit and train staff and volunteers to provide respite support, group support and group facilitation.
Successes included:
*Self-sustaining drum group and high numbers of group engagement
*Partnerships with other local community groups
*Carers and their loved ones reporting new hobbies
*Reports of health and social benefits of all attending, including statements of increased self-esteem; help to re-engage with passions; kick start healthier habits; peace of mind knowing their loved one had support; meeting new friends; help to change career (this was a Carer who had to leave their job when their loved one was diagnosed with cancer. they engaged in the fitness initiatives with the goal of physical training to strengthen their application to join the police force).
*Instruments acquired proven as a reusable investment and made accessible
*Engagement of diverse participants (particularly male engagement, over 75s and families within the music initiatives)
*Profile raising of the initiatives for the centre and positive impact on fundraising
*Carers reporting that the maintain engagement with external initiatives following the funding coming to an end
We were happy with the successes of this project and felt that we met the priority areas via the successes detailed above.

What Renfrewshire Carers has learned

We were overwhelmed by the response to the guitar group and have since sought more funding to support this group to continue. We have learned that we must be more proactive to see how popular a group is and apply for funding in good time.
We partnered with two external organisations during the project and have since partnered with third who expressed an interest in working with us when they saw our music initiatives. We have learned that music seems to be very appealing and has had excellent responses through social media from a PR perspective.
The project being in four parts meant that we had to hone our planning skills about to logistically deliver all four and to do so in a way that they compliment each other. for example, we launched the personal training initiative then the group sessions; targeting our PT participants and developing their confidence to attend group sessions. We also had to move our budget around a little to accommodate the demand the demand for the guitar groups.

How Renfrewshire Carers has benefitted from the funding

We have benefited from this project in several ways and are very grateful for the opportunities that this allowed us to deliver to our Carers and their loved ones. Our partnerships have continued and we have expanded out community reach, Carers and their loved one still attend external groups, we now have a self-sustaining drum group and accessed further funding for the guitar groups. The instruments that have invested in have also been used for various other groups in the centre. We have also been approached and work with other community groups to deliver music initiatives and will soon launch another movement initiative that has been inspired from this project.

Up to 65 Carers will have been supported and benefited from participating in music and movement respite initiatives.

67 Carers engaged in our initiative throughout the year. They were able to choose from various projects to attend and have encouraged others to join also.

We worked with a Carer who initially accessed our personal training initiative. She reported that these sessions helped build her confidence and base level of fitness to attend group session, which were also part of this project. After attending the group sessions for several weeks, the Carer advised a staff member that she was going to put an application in to join the police force (which was also a career change for her) due to her fitness levels and self-esteem increasing. She also stated that she felt more able to manage her caring role due to feeling healthier and having increased energy levels.

Carers will benefit from having access to something that can be for them or for their loved one. They will have access to peer support and potential training opportunities to become more involved in group facilitation.

The drum group was very successful in engaging Carers and their loved ones as it was an accessible group designed for all. We had Carers bring their elderly loved ones with dementia and others who brought their children. Participants played rhythm games that brought laughter and creativity from all involved. Making mistakes was encourage and many participants were encouraged to facilitate the group.

We now have two Carers who regularly help to facilitate our group and also take part in facilitating external groups out with our centre. One of them has also been asked by an external community group to attend further training in facilitation and has had their passion for music sparked.

Carers will feel less stressed and their physical and mental well-being will have improved.

We worked with questionnaires and group check-ins throughout this project and all participants rated the movement initiatives highly with regards to the impact on their physical health. They reported that their energy levels had increased, they felt better about themselves and their moods had improved. Weight loss was also reported. The movement and music groups both featured highly in feedback regarding the benefits to the mental health of those who attended. Friendships were formed and social isolation was reduced. People reported feeling relaxed and happy after sessions.

The guitar music group attracted three male Carers over 75. They didn't know each other prior to attending the group and all connected, receiving discounted guitars from our initiative and continue with their lessons after the group finished. Once of these men reported that the group was the only thing he had that was just for him and how important it was for him. He was also finally getting to do something that he'd wanted to do for a long term but never thought he'd achieve. We provided respite support for his wife who had advanced dementia, which allowed him to fully engage with the social aspects of the group without the need to rush home. The Carer also advised us that his grandson thinks he's now the coolest grandpa in the town. 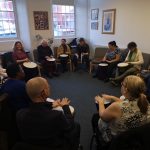