A story by No Limits

We are a multi- sportsclub for children and young people in the east central Scotland area and we specialise in providing sporting and social opportunities. we also organise weekend activity breaks and week long activity holidays.

What No Limits Kielder Holiday 2014 did

We took 35 people (members and their carers)for a week long activity holiday including full board at the Calvert Trust Holiday Centre in Kielder, Northumbria at a cost of £695 per person

They took part in the following activities:

Velcro Olympics, Sailing, Canoeing, Power Boating, Archery, Orienteering, Climbing, Absailing, Zip Wiring, High ropes, Clay Pigeon shooting and a host of games and problem solving exercises,.plus we arranged a day visit to Beamish Open air museum in County Durham. At night time social activities including quizzes ,karaoke and a talent contest were organised. These opportunities are limited to people who are members of the club ,the chance to take part is advertised internally by e- mail, poster and by word of mouth .

(Stuart is a founding member of No Limits and is now a member of the management committee, he has spina-bifida and is a wheelchair user. When doing activities he relies solely on the strength of his arms, along with a healthy dose of stubbornness)

This was my 6th year at Kielder, and I never get tired of going!

As a recent Honours graduate desperately seeking employment, I spend much of my life sitting in front of a laptop all day slowly losing my marbles. Any opportunity to get out and about is to be jumped at (well, figuratively speaking anyway) We were offered a wide range of activities - Water Sports on Kielder Water reservoir such as Canoeing, Kayaking, Motor-Boating and dinghy sailing (Challenger, WaveRider or, for the real thrill seekers, the Drascombe Lugger); Orienteering and Geo-caching, scenic tours in golf buggies, archery and Laser Clays.

I gave both the zip-wire and the King-swing a miss as I wasn't sure if mixing recently diagnosed epilepsy with flying through the air at approximately 100kph whilst dangling 10m off the ground would be a particularly smart move. My personal favourite activity had to be the Rock Climbing. My group didn't get to climb the outdoor iron tower due to the risk of it being struck by lightning from the rather inconvenient storm passing over. I admit I was a little disappointed - The little nuts and bolts make for a really challenging climb – but I suppose in hindsight, being fried isn't exactly good for one's health.

However that did mean an extra session on the Indoor Wall, allowing me to use the bouldering run, the SRT (Single Rope Technique ) AND the wall itself. It was AWESOME, even if I did have a highly-enthusiastic (but well-meaning) Spaniard trying to tell me what to do at every hand-hold and corner. I much prefer being left alone and learning from my mistakes. I've also heard rumours of a possible expansion project coming up – Roll on next year!!

The evening activities were a bit more laid back – including a mix of Bingo, quizzes, charades and Pictionary. I was even persuaded to ‘sing' in the karaoke, subjecting those brave enough to stay in the room to some 80's power ballads. We also ran our own table-tennis tournaments (until they were interrupted by appearances from bats of the more animate flying variety) and live jamming sessions (complete with guitar, mandolin, bodhrán and rather dubious Bob Dylan vocal impressions) which have become a key feature of every visit to date.

In previous visits, we have been taken to the Birds of Prey Centre in Leaplish. This was a popular destination, allowing members to get up close and personal to species from around Britain and in some cases, beyond. There are also frequent flying displays, allowing people to handle the birds. Kielder have negotiated a deal with the Birds of Prey Centre whereby entry fees are reduced if the group go in with a member of the Calvert Trust staff. Unfortunately, there have been a few occasions over the years when staff, who drive the buses, have provided a pick-up/drop-off service only, resulting in different groups paying different rates to get in. As such, it was decided to have a different activity on the schedule this time.

We were given a number of alternatives to consider - Beamish Pit Town Museum, Gateshead Shopping Centre, Vindolanda Fort, a local petting zoo or a Northumberland coastline walk. We have several fairly substantial shopping centres in our local area and Gateshead was quickly removed from the short-list. The Five Sisters' Zoo is within walking distance of my house (which, for me, is really saying something) so the farm was of no interest to me. Beamish also sounded rather like SummerLee and New Lanark which aren't all that far away either and, much though I would love to explore more of a foreign country, I wasn't sure how wheelchair-friendly the coast would be. For me (and, incidentally, almost everyone I spoke to) it was Vindolanda all the way. After all, it is considered to be one of the largest, most significant Roman archaeological sites in Europe. Following much discussion, it was decided that we would head to Beamish and, after a mere hour and a half by bus, we arrived at our destination.

Beamish is definitely one for the more ambitious wheelchair user. It is built on a hill - Or, more accurately, several hills. Mostly around the 40o mark, and covered with a light dusting of gravel - Just enough to give the effect or riding on ball-bearings. There are some flat areas, but these have cobblestones, so you may want to get your suspension checked before visiting. The leaflets state that buses and trams run every 20 mins or so, which would have made getting around that little bit easier (especially around that one summit which took 3 grown men to help me reach). Unfortunately, the one that stopped for us had steps to get on (bus, not heavily built man).

I did ask about going inside one building which seemed particularly popular. I was directed round the back to another, steeper ramp. I asked if they could adapt the building to make it more fit for purpose, but the man in charge informed me that listed buildings are exempt from being accessible to interested members of the public. The bush-craft helped me to chill out afterwards. We spent the afternoon making our own hand-picked nettle teas and chatting about life, the universe and politics. Rounding off the holiday happy as a massive pyromaniac building a fairly substantial bonf...oh, wait...
Elizabeth is the mother of two children with special needs)
I have been asked by Paul Weddell if I could write something about the benefits of the holiday experience at our recent trip with the No Limits Sports Club to my family, well here goes.

Dear Paul,
Snapshot Memories I would like to thank you so much for your huge effort, time and trouble you put into ensuring the families of the No Limits Sports Club have the opportunity of such a fantastic experience of the week long holiday at The Calvert Trust, Keilder.

While canoeing I also learned “the frog song” thanks to Christine’s wonderful singing - I’m still smiling.

I watched my daughter (who has Downs Syndrome) climb the climbing wall with great difficulty, but her determination was such that she managed to climb right to the top – how inspiring!

All the mums trying to sing at Karaoke – a sight only to be photographed – never heard! Andrew and others having the best time ever taking their turn to shine at Karaoke.

Having the chance to talk to parents about our “young people”, share experiences and provide a listening ear – normally while relaxing in the hydrotherapy pool!

Watching my son (who is Autistic) chat to others and sit with others at meal times – only by knowing him is to know how difficult and how long it has taken him to be able to do this.

Helping supporting each other to challenge ourselves - Linda (another mum) being able to complete the climbing wall.

My husband having the chance to “chill” with other dads and see him with his son sailing and how close they have become.
Although these are just a few of my favourite snapshot memories, having so much fun with my family and now friends around. Life with two young people with disabilities can be a challenge but this holiday is the “recharge of my batteries” for which I am truly grateful.

(Andrew has a learning disability and complex needs, he is a former Scottish champion at Boccia and has won numerous awards. In 2012 he was an Olympic Torch Bearer. No Limits has played a very important part in his life.)

What No Limits has learned

The fund has strengthened our organisation by helping us to provide these projects on a regular basis.

The number of people who attend the club on a regular basis has increased. The format was changed by including an away day trip- this was enjoyed by most but not all as the venue was not 100% wheelchair accessible.
Top tips No Limits's top tips for an organisation that wants to run a similar project

Make good use of local resources and services 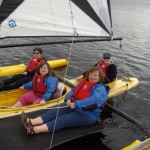