A story by Include Me 2 Club SCIO

We ran an evolving range of positive activities that enabled vulnerable children/young people under 18 to safely connect with their peer/social groups whilst their Parents/Carers received regular respite breaks: tackling the wider isolation/loneliness and other on-going challenges.

We delivered:
5 x weekly outdoor Pop Up Play Sessions in which small groups of children/YP engaged in set games, messy play, outdoor education using a rotating ‘circuit style’ model. These sessions were delivered between Cowan park, Haghill and Dunterlie Park . We had a great response to the outdoor sessions as they provided a safe environment for children to come out and play after the long covid lockdown. We had 15-20 children attend each session which lasted 2hours each. As the weeks went on we noticed that children started to look forward to the sessions. The parents felt their kids were in a safe zone and could get some respite.

4x weekly Digital Activity Sessions via which isolated children/YP engaged in focussed activities, e.g., pottery-making/painting, sand-art kits, cooking, etc., from the safety of their home whilst socialising/building friendships with their peers. Activity packs were delivered to children to provide them with the kits and materials to participate . We worked along with Connecting Scotland to deliver 25 devices with internet dongles to allow all children to participate with appropriate devices. All children were also distributed packs which included potter painting kits, crafts boxes, bubble wands and asda vouchers. We distributed around 100 activity packs to children on our membership database.

3 x weekly Themed Activity Sessions enabled YP aged 12-18 to safely learn/engage in key activities . including gaming, videography, photography and animation. These were delivered in our Barrhead base and also at times these were online. Our Base in Barrhead was prepared in a manner which met government guidelines. These included social distance and handwashing stations.

As government guidelines started to ease we were able to return some of the sessions back to face to face sessions and groups in August.. This included:
2 x weekly Junior Youth Clubs for disabled children under 12 at Dalmany Centre and Haghill. This has been in addition to the outdoor street play sites as originally planned.

What Include Me 2 Club SCIO has learned

We have learned that we need to replicate the success of this service out with East Renfrewshire. as our adult clubs expand to new venues we are becoming aware of the lack of services in other deprived areas. Also we will look into budgeting and becoming further cost effective to allow us to expand into newer areas and sites and we will aim to work with partner organisations/MPs/MSPs to ensure we are working in the right areas and our services are targeting those who need it most.

How Include Me 2 Club SCIO has benefitted from the funding

Our organisation has benefited in being able to provide our members and their families/parents with a much needed service to help improve their social networks and their mental health. This has been a very rewarding grant for us as it has allowed us to make a real difference not only in the child/yp who is attending life but also those around them. We have also benefitted by having a surge of positive reviews and evaluations which will strengthen our organisations reputation for delivering a high standard of service in areas where it is needed most. Furthermore as we look to expand into additional sites we have gain a level of recognition and respect from local councillors and MP's which we would have not been able to achieve had we not received this grant.

120 x Children/YP with disabilities/multiple ASN will have engaged in a range of inclusive recreational/sport activities that are otherwise inaccessible but via which they will gain key life skills, positive new friendships/networks, and improved their confidence and resilience.

Children/YP with disabilities/multiple ASN engaged in a range of inclusive recreational/sport activities that otherwise inaccessible but via which they gained key life skills, positive new friendships,improved their confidence/resilience. Children/YP feel happier, positive and less isolated.

Child "Y" has been new to attending the club. he has recently been diagnosed with autism and was lacking social interaction and a network for support. He started attending the club in Barrhead and over a period of 8 week a noticeable change was developed in him. He was keen to attend and not miss a session. He appeared a lot happier and engaged in the sessions. Over time he stated to interact with peers and took part in activities that were out of his comfort zone. In addition to this the club has provided him with a space where he could be more vocal to what he would like to do which has been great personal development in his speech.

145 x Parents/Carers of disabled children/YP have received regular respite breaks and time to focus on their own wellbeing. As a result, Parents/Carers report feeling less isolated and more resilient and positive about the future: helping them better manage their on-going caring responsibilities.

Parents/Carers of disabled children/YP received regular respite breaks and time to focus on their own wellbeing. As a result, Parents/Carers report feeling less isolated and more resilient and positive about the future: helping them better manage their on-going caring responsibilities.

The regular respite has enabled parent "J" to shop for groceries while knowing her child is in a safe cared for environment where she was supported and encouraged. Her child has an ASN and her child find supermarket environment difficult to cope with. as the clubs are on a regular basis and "J" has been able to plan her chores around this without having to take her daughter into an atmosphere that she would normally struggle with.

145 x Carers of disabled children/YP will have received regular respite breaks and time to focus on their own wellbeing. As a result, Parents/Carers will report feeling stronger, less isolated/ostracised, and more confident in continuing their caring role.

Carers of disabled children/YP have received regular respite breaks and time to focus on their own wellbeing. As a result, Parents/Carers report feeling stronger, less isolated/ostracised, and more confident in continuing their caring role. Parents/Carers also report having stronger, improved relationships with their children.

Parent "M" has been able to unwind and relax during the time the children are at the clubs. It has improved her wellbeing and mental health allowing her to have better and improved relations with her family. as a result the dynamics of the family are better. She has on a number of occasions spoken about how the clubs have had a huge positive change on her family life at home as the clubs are after school and allows children some space and time to burn off energy resulting in less stress at home.

120 x children/YP with disabilities/multiple ASN and their Parents/Carers will have been supported to safely reconnect with their peer/social groups, get back out into the community, access a range of opportunities that are otherwise unavailable, and build new skills and support networks.

As a result, children with disabilities/multiple ASN and their Parents/Carers will have visibly improved health and wellbeing and build positive new support networks: improving their long-term resilience and wellbeing.

The street play sessions have allowed children to reconnect with their local area and communities. As they are set in the heart of residential spaces- it allows children from the same neighbourhood a chance to play and explore together which would not otherwise happen. We have seen many friendships extend to out of our clubs as it has given children the skills and networks to flourish the friendships. Child "j" and "b" reside a couple of streets away. Prior to attending these clubs they were not aware of each other. Since attending street play together they have become great friends and as well as attend street pay they now play regular in their local parks and in the street. 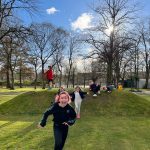 Include Me 2 Club SCIO