We provided four activities weekends, three for children diagnosed with autism under the age of 18 and one for young carer siblings living in Perth & Kinross.

The camps were preceded by 4 months of social events to allow the children to get to know their fellow campers and build relationships with staff and volunteers before going to camp which was often their first time away from home.

What Project Teen Ranch did

Our Short Breaks Co-ordinator advertised the project with families who are registered for Perth Autism Support services and spent time running information nights about the camps so carers and young people could be fully informed as to what the project was about and how we were taking into consideration the needs of both young people on the autism spectrum and their families.

Each camp had 15 children allocated a space and this meant the recruitment of 7-8 volunteers per camp to allow us the correct ratio of adult to child support in line with the policies of Perth Autism Support.

Application forms were received and children were allocated spaces on a first come, first served basis although through work with children in other areas of our services we were aware of 5 families who were identified as particularly needing the support and respite of the camps, and these families were approached directly to offer places at camps.

The camps themselves were preceded by a programme of social activities for the young people to allow them time to build relationships with each and with staff and volunteers before going to camp, which is of the utmost importance when working with children on the autism spectrum. Through this process the staff and volunteers could begin to identify any child who may need extra support or one to one support and this could be easily organised as the Co-ordinator could see which volunteers had built the best relationships with these children and ensure that they were allocated to support them specifically while away at camp.

This meant the children were happy and comfortable and parent/carers could have clear information about how their child would be supported while they were away. The social activities also offered respite to the parent/carers and young carer siblings of the children with autism which allowed them 2 hours every session to be able to take time for themselves and parents chose to go for a coffee with each other or use the time to do things that may normally be challenging for a child with autism such as going to to the supermarket, this then was extended to full weekend respite while children were at camp.

What Perth Autism Support has learned

The fund has made an incredible difference to our organisation and the lives of our children and families. Our children unfortunately do not meet the criteria for respite through local statutory services with just a diagnosis of autism but the challenges of living with a child with autism can be stressful and challenging, although we provide a number of activities throughout the week for families, Project Teen Ranch allowed us to provide up to a full weekend of respite for families, something which the majority had never had before, this allowed them time for themselves, time with siblings and time to recharge their batteries to allow them to be more able and confident in their caring role.

Through the other areas of services within PAS we were clearly able to identify any particular families who had further challenges and who would benefit from an extended period of respite and our Short Breaks Co-ordinator was able to approach them directly to engage them in the service of Project Teen Ranch.

We have also learned the benefits of pre camp preparation and identifying in the early stages of each camp who would benefit from more preparation and making sure each individual child had a support package tailored to them which varied from one to one allocated support at camp, to extra meetings with our Short Breaks Co-ordinator to prepare for camp or extra pre camp visits to familiarise themselves with the venue. 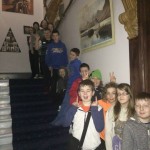