A story by REACH Lanarkshire Autism

Our project involved day trips for families to Bo’ness Railway Station and the Yard in Edinburgh and we also took families on a 2 day trip to Blackpool. As well as this, we set up Indepen-dance sessions in South Lanarkshire.

What REACH Lanarkshire Autism Programme and Indepen-dance Sessions 2017 did

With regards to the trips, we posted on our Facebook page which has all of our members on there and asked what types of trips they would like. We gave examples and our members were then asked to choose their favourite. We offered the Blackpool trip for all the family and we had nearly 50 families who were keen to go. As we were limited for numbers in terms of the funding, we asked if members would be willing to pay something towards the cost of the holiday and this would allow us to take more families on the trip. This suggestion was greeted with lots of enthusiasm and members were happy to pay towards the cost if it meant the money we brought in could increase the number of people who were able to go on the break.

To keep things fair, we said that those not able to make the Blackpool trip would be given first priority for the 2 day trips and our members felt this was fair as it meant that as many families as possible would benefit from either the day trips or the short break. The short break was to Blackpool which seemed to excite both the carers and their children and the day trips proved to be just as successful for families who felt they couldn't commit to the short break. The day trips were to Bo'ness Railway Station as it links in with Thomas the Tank Engine which is something our children love and also The Yard in Edinburgh which is an adventure playground for children and young people with Additional Support Needs.

At the Yard, our parents (carers) got the chance to sit back and relax as they knew that their children were in a safe environment with no chance of escape! At Bo'ness, the carers loved spending time with other carers and taking their children on the train rides. The short break to Blackpool proved to be a major success as our carers felt supported and they came back to us to say how much they had enjoyed the break and the difference it had made to them to be with other families just like them. Some had never even ventured on holiday with their children prior to the break but they now feel they have the confidence to do it again as we made sure that what we had put in place for them worked as a family.

This comment is from Sandra who took her son Joseph on the short break to Blackpool:

What a smashing few days, hotel fantastic, pleasure beach full of joy. Thank you so much to everyone involved in arranging this. The most relaxed I've ever been whilst on holiday with Joseph because I knew I didn't have to be on guard, Joseph could be himself in the hotel without anyone casting judgemental or puzzled glances. It's wonderful to be around people who just "get it".
This comment is from Bev who took her two children with Autism to Blackpool:

Arriving back in Scotland with so many happy memories. We all had a ball and was so smoothly organised you all should be so proud. Was so nice to relax and be surrounded by like minded parents who don't judge and were so friendly!! Loved seeing everyone's pics too.
This is from Debbie who is disabled herself but also carers for her teenage daughter with Autism:

Had a fantastic time, hotel was fab. Thank you to everyone who was involved in organising this fantastic treat well done guys , hope everyone got home safe much love.
This is from Dawn who, along with her husband and mum for support, took her two children to Blackpool:

Everyone involved in arranging and overseeing this trip has been amazing. Taking the kids to the pleasure beach yesterday was so stress free compared to previous times. I think I could write you a novel for short breaks.

One very happy family tonight x
This is from Jennifer who managed one of the day trips and was thankful to have support over the summer:

Thanks to all the reach team who put it all together. We have had many fun filled days and activities in a supportive and friendly manner. So many happy memories made and thank you so much for saving my summer sanity.

Sometimes I'm too busy running after the kids to show my appreciation as much as I would like. But I thank you all so much for every bit of effort for your reach family x

What REACH Lanarkshire Autism has learned

We learned that putting the right support in place, no matter the activity, makes life easier for our families. It's good to give carers the chance to step back from their role and let others help. As a parent of two young adults with Autism, I know that it can be daunting to ask for help. You feel asking shows that you have failed but it means the opposite. It means that if help can be given, it can allow you to do more which will make you happier.

There were lessons to be learned with Indepen-dance as we initially had the parents working with their children and the numbers dwindled but once we put volunteers in to support the children, thus allowing the parents to sit down and rest, the activity started to work again. We are not perfect and we have made mistakes along the way but we managed to make sure those little mistakes didn't impact on the families as their lives are stressful enough.
Top tips REACH Lanarkshire Autism's top tips for an organisation that wants to run a similar project

Accept that there will be challenges along the way - you are not perfect! If someone tells you that they will get everything right - don't believe them!

However embrace the challenges as they help you to stop, have a rethink and plan again.

I have mostly commented on the Blackpool trip in this report as it has made such a huge difference to the lives of all those who went.

Parents were nervous and panicked about having everything just so; we took the panic away and committed ourselves to making sure they felt safe and happy.

Some of the parents who were involved in this project were quiet and didn't like to make a fuss. Those parents always worried me because they would never ask for help.
What these trips did was make them feel stronger and more able to face life head on.

They were around like minded parents and they bonded. They didn't feel so isolated and that's been a valuable tool for us to take forward. The less isolated they feel, the more we feel we are doing our job. 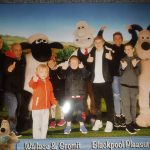