Activities ranged from a few hours to overnight and weekend stays and included a variety of activities such as biking, badminton, horse riding, gorgewalking.

We recruited a Project Worker to work 15 hours a week with the young people. We worked with 5 young people who we had already been working with through our Better Breaks 2014-15 funding plus 5 new young people. We advertised the opportunities through our networks locally including Chip+, Connecting carers, Friends of Autism Highland and National Autistic Society. The young people were chosen giving priority to their individual/social needs, the families needs and taking into account other opportunities they might have for respite or outdoor activities.

Sam is a 10 year old boy with Autistic Spectrum Disorder who lives at home with his Mum who is his sole carer. Sam does not receive any other respite and during the year his Mum has been struggling to care for him as her own health needs have escalated over recent months. She was forced to take time off sick from her part-time job and was unable to take Sam out and about as much as she used to. Sam had therefore started to spend more time in his room on his own.

Sam has enjoyed 7 short activity sessions (usually a walk locally), an activity day (canoeing and den building), an overnight stay and three weekend stays at Abernethy Trust, Nethybridge, taking part in a variety of outdoor activities with a small group of other young people. His Mum has seen his confidence grow so that he has been able to try new activities with 1:1 support. These included dry slope skiing, an activity which he was initially very reluctant to try but was really proud of himself when he persevered and was able to master the basics. He also tried horse riding for the first time on one of his weekend stays.

Sam’s activity breaks have greatly helped his Mum to sustain her caring role as she has been able to spend the time resting and making sure her own health needs are taken care of knowing that Sam was having fun and been well looked after.
Rhiannon is a 13 year old girl with Autistic Spectrum Disorder and since December 2014 she was home schooled because she could not cope with the social aspects of her school. During that time she had done very little without her Mum being there to support her. The Reach4Reality Project Worker started meeting with Rhiannon on a weekly basis doing a short activity with her locally, for example a walk or playing badminton. Within a month Rhiannon felt confident enough to come for an activity day as part of one of our weekend camps at Abernethy Trust, Nethybridge.

Although she participated fully in all the outdoor activities she was very much on the periphery of the group socially. However, the day had given her sufficient confidence to mention to her Mum that she would like to consider returning to school and since Easter 2016 she has been going part-time to her local High School.

In the meantime she had an overnight stay on our March camp with 1 ½ days activities her Mum came and stayed with her for the night but Rhiannon participated in the rest of the camp without her Mum being around. By the end of her stay Rhiannon was joining in with card games with the other girls on the camp and was becoming more involved in the social aspects of the camp. Also two of the other girls on the camp attend the school Rhiannon was due to start, so she was able to meet and get to know them beforehand and this has also helped her with her return to school.

Rhiannon’s Mum feels that Rhiannon would never have gained the confidence to return to school or cope with the bigger groups at school without the input of Reach4Reality and the progressive and small steps involved to gradually build up to an overnight away and from doing activities on a 1:1 to doing them in a small group. Rhiannon is now looking forward to a full weekend away without her Mum! Rhiannon has also been able to use her increased confidence to try other new activities, for example going to a local gym.
Eilidh is a 13 year old girl with Autistic Spectrum Disorder living at home with her Mum and Dad. She is home schooled because she cannot cope with the school environment due to her autism. During 2014-15 she had been taking part in short activity sessions locally through our 2014-15 funding from Better Breaks, as well as having one activity day at an outdoor activity centre as part of one of our weekend camps.

During 2015-16, she has continued to enjoy regular short activity breaks with the Project Worker and has extended the range of activities she is comfortable and confident to take part in, for example indoor climbing and sessions in the local gym. She has also enjoyed 3 further activity days as part of a small group and has grown in confidence as she has tried new and more challenging activities such as gorge walking, the zipwire, crate climbing and dry slope skiing.

She has also been able to cope better with the social aspects of her days interacting with other young people and the adults on the activities. She has developed a friendship with one of the other girls on her activity days and has met up with her socially a few times. Eilidh has also recently had an overnight stay on one of our weekends and her mother stayed with her during the night but then went home and left her for the rest of that day to enjoy the activities. This is something her parents would never have thought possible 18 months ago! She is now also looking forward to a full weekend away later in the summer without her Mum.

The employment of a part-time project worker has helped us to really tailor the activities to the needs of the individual young people and to be able to offer more regular shorter activities locally, as our work has progressed, this is something that the young people have really needed and benefited from as it builds their confidence before being able to cope with a longer activity break or one with other young people.

We have found that some young people due to the needs of their autism may find doing activities within even the small groups we have too challenging. For some even the thought of going away for an overnight is beyond their coping abilities. We have gained an insight into how some young people with Autistic Spectrum Disorder can really struggle with the school environment.
Top tips Reach4Reality's top tips for an organisation that wants to run a similar project

Start small and stay small to ensure the personalized service

Be prepared to be flexible 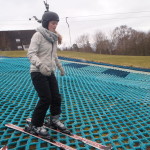