A story by The Broomhouse Centre

The support groups provided Adult Carers and Young Carers with much needed respite from their caring role.

The Young Carers were able to have 2 residential experiences over the course of the year. This included 2 weekend breaks lasting from Friday afternoon to Sunday afternoon. A group of Young Carers went to Loch Eil near Fort William with The Outward Bound Trust and participated in a number of exciting and challenging activities, such as raft building, building a ‘human tower’ using communication and team work skills and a hike up Ben Nevis. The Young Male carers went to Wiston Lodge by Biggar and took part in camp fire activities such as fire building, a high ropes course and low level team building and problem solving skills.

The weekend residential break was a great success for the Adult Carers Group. There was a minibus to take the group to Stirling where we had booked Airth Castle, a quality hotel and leisure complex. The group set off on the Friday afternoon and returning Sunday afternoon which gave the carers two nights dinner, bed and breakfast and two nights of unbroken sleep. The hotel had lots of activities on offer, swimming pool, sauna, Jacuzzi and of course some lovely country walks.

Our Reflexologist and Swedish Massage Therapists were on hand to give all the carers some therapy time, this helps to relax and de-stress them giving some “me time” for reflection and helping with coping strategies that they can use within their caring role. By organising a short residential break we have given the carers respite from their everyday caring life, a chance to recharge their batteries, improve their energy levels, share any problems and a chance to see their caring role in a positive light again.

*Elaine was referred to Broomhouse Adult Carers Project through the Carer Support Team, she was stressed and her mood was really low. Elaine is a Primary School Teacher, working Mum and Carer to both her husband and adult son, she also has a daughter at university. Elaine sometimes feels very guilty as she feels she relies on her daughter a bit too much, feels that she has her own life and studies to get on with. Elaine has a very busy life mostly revolving around her work as she feels this is her escape, none of her colleagues are aware of her caring situation at home, this is the way Elaine wants it as she feels there is no judgment towards her.

Elaine has no family support apart from her daughter and no friends that she feels she could be open and honest with, Elaine is quite socially isolated when she’s not at her work. Elaine had been a Carer to her husband most of their married life, he had suffered a couple of bouts of depression in the early years. However, recently her husband was diagnosed with terminal cancer and was told there was very little hope of any recovery.

He was treated and his cancer went into remission. Although this was great news, there were financial implications for them all. He then became mentally unwell and was diagnosed with psychotic depression leading to several admissions to The Royal Edinburgh. He still suffers with depression and occasionally has psychotic episodes. He is still too ill to work and very rarely goes out. Christopher is Elaine’s 25 year old son who suffers with severe depression, anxiety and agoraphobia he spends all day every day in his bed in a dark room and will not communicate with anyone outside the immediate family. He too has been in and out of The Royal Edinburgh for the last several years.

Elaine came to the Adult Carers Service for help and advice, she didn’t know where to turn to as she felt she was constantly being shunted from pillar to post. Elaine was at the end of her tether, feeling totally overwhelmed with constant worry about her husband and son and with the feeling that there was no hope, she met with a staff member from the Adult Carers Project and was referred to the monthly support group and was able to access the Residential break to Airth Castle and the away days with the other group members funded by Creative Breaks.

Accessing these opportunities greatly helped Elaine feel that she could cope better with her caring role and improve her physical, mental and emotional well-being and allow her the chance to enjoy activities outside of her caring role.
*Janet is a lady in her mid-sixties who has always had an active working and social life. She had in the past been involved with the community, particularly planning events. Janet now cares for her husband who had a massive stroke a few years ago, which left him with very poor mobility and reliant on a wheelchair. Her husband is also now a heavy drinker and expects Janet to stay up until later than she can manage, so she can assist him to go to bed. Janet felt constantly exhausted, overwhelmed and undervalued.

Janet suffers with depression and high levels of anxiety and low self- esteem making it difficult to connect with people outside the home environment. She doesn’t sleep well and finds it difficult to ‘switch off’.

Janet has been attending the Adult Carers Support Group and is enjoying the company and the support of the other Carers. Janet has also enjoyed the Carers clinic where she had six weeks of reflexology, relaxation and was taught techniques to help her cope with stress and to help her sleep pattern. Janet has recently attended a Carers’ day trip, although at one point she felt a little anxious so she took herself off to have a quiet coffee on her own. She recovered and thoroughly enjoyed the trip.

Janet said she realises that she has got so used to people speaking down to her or not talking at all that she can find groups hard work but she is persevering and working her way through it. The Adult Carers Group recently had a very successful evening out and she was on great form, very relaxed and laughing a lot. She is slowly learning that it can be good to talk and share how you’re feeling with others and learning that not everyone is judging her. The day trip and evening out were made possible by the funding we received from Creative Breaks.
*Ben is a Young Carer aged 15. He cares for his Mum who has severe depression, anxiety and agoraphobia. Recently, Ben’s Mum made a serious attempt to take her own life and Ben was witness to this. As a result, his Guidance Teacher at High School called and asked for more intensive support for Ben. The Project Manager met with Ben and encouraged him to access the short break with the Young Carers Group explaining that he would be with Young Male Carers in very similar situations in a safe, supportive environment, focusing on team building, confidence building and having space.

The Young Carers Support Worker provided direct support for him and his Mother and older sister to ensure a support plan was in place to allow him to be able to attend the residential. He came on the residential with the group and thoroughly enjoyed it, he made new friends and connections with the other young men in the group, he spoke to staff about how he was feeling about his Mum and he participated in all the team building games. He reported that he even though he had been ‘nagged’ into coming(!) he had really enjoyed himself, he felt a lot less isolated, less stressed, less lonely and more confident and motivated.

What The Broomhouse Centre has learned

This fund makes a huge difference to our organisation, we feel it is essential for our Projects to be able to offer free residential experiences to Adult Carers and Young Carers simply to give them the chance to seek much needed head space from their caring role, re-charge their energy levels and be beneficial again upon returning home to the person they care for.

At the Young Carers Project we have been able to offer a targeted residential to Young Male Carers and have used other funds to target Young Female Carers, we see the benefit of single sex work as giving them a different experience and chance to open up in a safe space about diverse issues they face in their peer group.

The residential is a big attraction and often a ‘hook’ for new Young Carers accessing the service, it is also a really intense moment for them to team build and bond and we find strong friendships emerge from these shared experiences. A challenge for the Adult Carers Groups has been finding a time that suits all Carers to attend a residential and organizing replacement care for the person they Care For.
Top tips The Broomhouse Centre's top tips for an organisation that wants to run a similar project

Discuss the needs of your group and the kind of experience they are looking for that will suit them best.

Make sure you look around for great deals for Charities, often the places you are accessing are more than happy to help with costs if you explain the aims of your organisation.

Gather as much evidence as you can to track the impact the service has, for example, ask a service user to be an example case study and tell their story in their words. 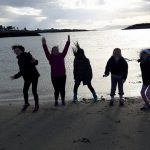