A story by Lothian Autistic Society

The Saturday Adventure Team provides opportunities for autistic children to get together in a safe and supported environment to have fun, make friends, explore and expand their horizons. The regular six hour sessions give parents and carers valuable time to do other things at the weekend.

What Saturday Adventure Team did

Saturday Adventure Team (SAT) met for 19 sessions between April 2021 and March 2022. The sessions were all based in our premises at Baileyfield, over the period 13 children and young people attended aged between 9 and 16, with the median age 10. There were two girls in the group.
When regulations permitted the group was able to resume trips to various attractions, including Dynamic Earth, Dalkeith and Newhailes Country Parks and the Conifax Centre for active play. Each session also included activities in the venue such as baking, arts and crafts, sports and games and time for free play. The group also benefitted from visits from Cool Creatures and Magic Gareth, each of which proved very poular with most (albeit not all!!) of the members.
Carers reported that they were able to spend valuable time either by themselves, or, more commonly, with other siblings, doing things that were not able to do when their other child was present (such as attending Saturday football games as a family or going to the cinema to see films that would not have suited the child attending the SAT.

What Lothian Autistic Society has learned

As reported previously, we had to take on responsibility for our own premises when we restarted services after the lockdown. This has required the organisation to learn new skills around building management. Having our own base has afforded the opportunity to make contact and build relationships with other local groups, such as the ranger service in the local park, which has lead to some further opportunities to use the park facilities. We are currently looking to work in partnership with a local specialist book lending service for young people with disabilities, who initially came to offer a session for the young people and have realised that they can offer a broader service on one of the days when the venue is vacant.

How Lothian Autistic Society has benefitted from the funding

We have been able to support families in East Lothian who had otherwise been unable to access suitable support. For many of the families this is the only support they can access as waiting lists for other services are extensive (the waiting time for access to the local Holiday Activity programme is 5 years).

Z loves Saturday club - it gives him a safe place where he can be himself -he loves it - he has made real friends -this is the only service that Z has - we can’t let him out on his own (he has no sense of danger). For me as a parent I know he’s safe and surrounded by friends and helpers that just let him be himself - it also gives us a few hours to recharge our batteries which is sometimes really needed. He enjoys the varied activities each time and is excited when I get the email through with the details. Without Saturday club Z would have nothing out with school - his ability to make friends and his social skills ( sharing and playing) have really improved - during COVID he became very withdrawn and was still a bit apprehensive about everything opening up - but being back at club has allowed him to overcome this.

The families/carers of 15 children and young people with autism will have benefitted from up to 144 hours break from caring, allowing them to spend time doing things with other family members or on their own

The families of 14 children and young people had the opportunity to receive 114 hours of respite, the average take up was 90% of this.

While my son is at the Saturday club, we as a family will go watch our 6 year old play football and watch his judo competitions, giving him our full attention. Without the Saturday club, only one of us could attend as A couldn’t cope at these events due to the noises and we don’t have any relatives who can help look after A... On other days, I can allow my 6 year old to invite a friend over to play with – unfortunately this can’t happen if A is at home because he doesn’t seem to cope well when this happens... The Saturday adventure club provides a fun and safe environment to help support my son’s social skills and allows the family to rest and look after their own mental and emotional health. My son has certainly made friends at Saturday club and for us it is so lovely to see because it is a place where he is accepted for who he is and not judged or laughed at for being different.

Families and carers will have gained confidence through knowing that their child has been appropriately supported by skilled staff who understand their child’s needs.

At the start of the project parents/carers completed a profile that identifies their child's support needs and their expectations for the project. The information was used by staff at the start of every session to identify appropriate support arrangements for each child during the coming session. This meant that families could confidently leave their child with a known member of staff who had a good undesranding of their needs.

B and K are twin brothers under the age of 10, who attend the Saturday Adventure Team. They are both highly energetic and as such require constant supervision to ensure that they do not cause injury to themselves and one another as they play. B and K also have other siblings, and our service gives their parents a dependable slot of time that they can dedicate to their other children, safe in the knowledge that B and K are in a fun, nurturing environment.

Each session included at least one period of active outdoor play, which was planned to be at the centre, in the local park or at the nearby beach. Several session s involved trips to activity parks or outdoor locations where the children could engage in more adventurous activities.

We are a family of 4 , Z loves his club it gives him something that’s just his - before we got Z a place life was difficult both myself and Z’s dad both work full time - we were both burnt out receiving very little support - I felt at the end of my tether and the worse mum in the world like trying my best wasn’t good enough both for Z and for my oldest R - when Z joined his club at first I didn’t know what to do with the time I had been given lol - then I realised it was okay not to anything - the more Z attended his club the more confident he became in social situations and refers to his friends loads - since lockdown he took it quiet hard when everything stopped do suddenly- we seen some of his behaviours regress he became more introverted and worried ( excessive) about everything - for us Saturday club gives us time out to recharge for a few hours it has really affect my mental health in a positive way - it gives me time to spend with R. 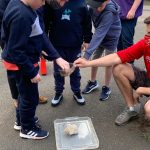