We hosted a Family Camp for Scotland families which was based at Tulliallan Police College Fife from 18th – 20th May 2018 inclusive, (3 days, 2 nights).

The camp was designed to cater for families of children with a serious, life limiting illness/disability which 16 families (67 individuals) attended.

What Scotland Family Camp 2018 did

Our Regional and Clinical Co-ordinators contacted each applicant to discuss their family’s situation and needs and to assist them through the applications process. Throughout January to March 2018 places were offered and confirmed. At the same time we recruited and appointed a team of volunteers to help support the campers. Each family had at least 2 camp volunteers allocated to them and we also had a team of 4 medical volunteers attend.

Families took part in fun activities and challenges together and within their own peer groups. Parent carers were able to spend time together whilst their children were enjoying activities designed specifically for them. The whole camp came together for meals and evening activities.

Camp addressed the following Better Breaks priority areas, we prioritised places for families whose children have complex needs. Our camps are specifically designed to increase confidence through participation in sports and activities that the families may not have access to in their everyday lives, and to encourage them to continue their participation after camp. At camp, we encourage the children to take more responsibility for their own care, and welfare, through forming new friendships, leading to greater independence as they grow into adulthood. We actively promote camp to hard to reach families, including refugees and those in remote rural areas. Our camps cater for families of all sizes and ages.

In previous years we have reported that managing last minute cancellations have been a key challenge for us, (an inevitable consequence of running camps for very ill children). Over the last 2 years we have established much more efficient processes to manage these cancellations, and better communication with parents on the wait lists, which, I am pleased to report, has ensured our ability to fill all last minute spaces in 2018. We had no vacant places.

We know that the children we support at our camps often have Psychosocial as well as clinical needs. And we have recognised the need for us to better identify those children prior to their arrival at camp. To that end, this year we introduced a new, permanent Camper Wellbeing Manager role to our staff team. One of the initial responsibilities was to create and introduce an assessment tool that enables us to better identify campers’ psycho social needs, so that we can better plan how to meet them.

The new role has provided an additional safety net for those who may have additional risk factors and has involved pre and post-camp communication with other professionals involved in these children's lives, (aside from parents and carers), such as social workers, CAMHS teams as well as medical professionals, to ensure that especially vulnerable children are provided with the best support possible whilst they are at camp. The new role has also led to changes being made to our volunteer safeguarding role, the Independent Safeguarding Adviser (ISA). This year a new benchmark was set to ensure all volunteer ISAs had Level 3 or equivalent training in safeguarding children

How Over The Wall has benefitted from the funding

The Better Breaks Funding has enabled us to establish the Scotland Family Camp in our annual programme. It has led to our being able to secure other funding we know that smaller trusts and foundations for example, are reassured by Better Breaks support of our work and that is a factor in their decision to give.

15 young people with serious illnesses and/or disabilities will feel more confident, will have higher self-esteem, will be more willing to try new things and will have made new friends.

We were able to support 16 families at camp meaning that 16 young people with serious illnesses attended camp. All took part in a carefully designed schedule of activities, some with their families, and some with their own peer group. They were challenged and gently encouraged (by volunteers and their own peers) to try things they would not normally consider attempting and in doing so, learned they were capable of more than they realised. All of them reported that, after camp, they felt more confident about trying new things and making new friends.

9 year old Sophie has leukaemia and is a patient at a Hospital in Dundee. She came to camp with very low levels of confidence. After camp, her mother said "The activities challenged her but the encouragement she received from the volunteers, who she seemed to trust from the first hour of camp, was amazing and she conquered her fears and just got on with it. It was, I think, life changing for her."

35 carers of sick children (including some young carers) will have rediscovered hobbies or interests or been introduced to new ones, including ones they can enjoy with their whole family.

We had more and larger families than anticipated come to camp this year and so were able to support a total of 51 carers, (both adult and young/sibling carers), 16 more than planned. Activities and challenges were planned around those attending, reflecting aspirations as well as needs. All families and carers embraced the opportunity to take part in a range of activities that they would not normally have access to, for logistical or cots reasons as well as pressures of time. 98% of those feeding back said they were very satisfied with the activities on offer.

The Carter Family have a 13 year old daughter with a brain injury. They struggled to do things as a family unit. They fedback that: "It was a great opportunity for us all to do the same things for once and not leave Lauren out. We loved the zip line, and wall climbing. It helped to show us all what we are capable of, together and independently. My daughter learned that having her condition does not have to mean she can’t do new and fun things and have fun. "

15 families will feel less isolated, more supported and better able to cope with the daily challenges they face.

Most parents fed back that one of the things they gained from camp, but didn't necessarily expect to, was the ability to spend quality time with other carers who understood and empathise entirely with the challenges they face in daily life, as well as the fear and frustrations. 96% of respondents to the formal feedback said that spending time with other carers, away from the children was key to their camp experience. Friendships were made, not just between the children, but also the adults. Most stated in open feedback that this has led to them feeling less isolated, less alone.

The Membi Family are migrants who have struggled to settle into the UK. This was not helped by youngest son Enoch's recent diagnosis of Sickle-Cell Anemia. Mum Christine is a single parent and she found Over The Wall at a time when the whole family was feeling “lost”. "As migrants, our day to day life was already a struggle...(At camp), to share experiences with other families with children who have the same illness as Enoch, it gives you a moment to really chat to someone. Being a carer means you don't get these opportunities to speak to many people. The whole experience gave us the strength and power to fight." We asked parent carers to comment on how meeting other families affected them. Here are just some of the responses, "It’s very humbling and it’s nice to be able to support other families. It also makes you realise you are not alone." "We made some great friends. There was an instant bond." "We gained comfort from those who truly understand. We've not had that before." “I gained a sense that I am not alone, and vastly less isolated and less afraid. have gained confidence in myself that I am a good mum and that I can handle all the pressure I am under. I also learned that I was holding my family too tightly and trying to protect them. I learned that they can get out there and do these amazing things we did at camp. I’m not the only one who can keep them safe and that’s a good thing."

15 families affected by childhood disability and serious illness will feel more connected, having enjoyed a unique opportunity to enjoy each other’s company, try new things, challenge each other, laugh together and relax. All campers will have a more positive outlook on life and feel better able to cope.

Enoch's mum Christine was able to see at camp how she needed to look after her own health in order to continue being able to support her children. She said "As a parent or carer, you are so focused on what needs to be done for your family that you rarely think about yourself. Not long ago I had pneumonia. I was unable to walk but I refused to go to hospital. I can see now that I have to rest as if i am not healthy I cannot look after Enoch and Hope." Here follows comments from various campers about their camp experience, what they enjoyed and how it has helped them, “My husband finally saw and understood just how ill our son is. Camp has definitely made my son's father appreciate the extent of his disability and health issues and he is now more supportive of me in getting the help we need." "My child now feels that he is equal, not less than, other kids." "A Lego game of 'builder and saboteur' touched me to the marrow. I learned how people can be wrongly accused in life because of their appearance and status. It was a great lesson for me." "We learnt we are a better team that we thought. and we also learned a lot from the other families, not just about the practicalities, but how to get through the hard times as well as how to maximise the good ones."

Seriously ill children and their siblings aged 8-17 will benefit from Over The Wall week long child only camps.

Hope is Enoch's sister. Enoch has Sickle-Cell Anemia and Hope takes on many of the caring responsibilities. Since coming to the UK (as migrants) she has struggled to make friends and her caring role exacerbated this. She attended Siblings Camp before coming to Family Camp. Her Mum Christine says: "Being at Camp was a great experience for her. It was the first time she had ever spent time away from me and Enoch and it gave her great independence and allowed her time to herself. She gained so much and made new friends. " 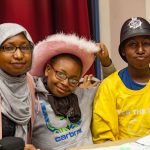